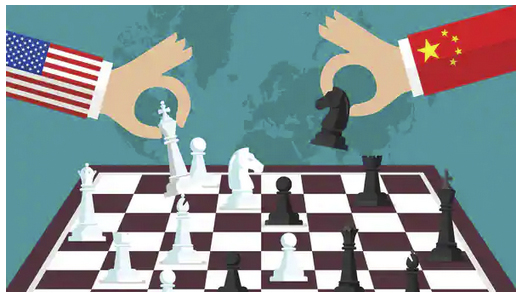 Is the world on the verge of another Cold War? Will we see Cold War II? Are we already witnessing this phenomenon? Where are the United States and China headed? Let’s examine a few pages from history in the context of this modern-day conflict.

At the heart of communism’s ideology is the goal of a one-world socialist state — worldwide domination over all people on the earth. Russia worked towards this goal from the inception of the USSR until its collapse in 1991. With the Soviet Union’s demise, China has now assumed the role of the heir-apparent beacon of communism in the world.

Another parallel between historic communism and modern-day China is the subversion of human rights and human dignity to be subservient to the needs of the state. Secretive China has been a major abuser of human rights among indigenous people in Mainland China for decades.

Communist economic systems are antithetical to free market capitalism. The Chinese government operates its economic model on state-owned companies that work as cogs in a wheel of the broader socialist market economy — planned economies that do not operate via natural market forces, such as supply and demand and the entrepreneurial drive of individual business owners.

At the heart of the communist model is the formation and sustainment of an incredibly large military force that can be used to conquer smaller states and serve as a deterrent against military retaliation or enemy preventive action. China boasts one of the largest standing armies in the world. In addition, China has the world’s largest population and its expansive land holdings make it one of the largest counties by area as well.

Naturally, since communism and socialism do not operate by way of natural market forces in terms of an economic model, its standard of living is considerably lower than the first world. However, this is not a concern of the Chinese government, communism’s tagline has always been deceptively, “the most good for the most people,” when in fact the ruling elite benefits at the expense of those who, in Orwellian fashion, are not as equal as themselves.

In the United States we see vastly different governing and economic models. Our Republic, these days more commonly referred to as a representative democracy, sees individual liberty and human dignity paramount to other concerns and the government only exists because of the consent of the governed. Our economic model — a free market, capitalist system — sees a system that has the prices of goods and services set by the demand from the market and much of these goods and services are provided by the private sector, not the government.

The United States has a large, developed, and strong military. It exists to deter aggression and defend against attacks — not to conquer other nations or to be used as a weapon against its own people.

Naturally, political scientists and international affairs theorists see a large potential for armed conflict between these two large, powerful, industrialized states that have competing ideologies and countering political and economic systems. Just as the United States and the former Soviet Union engaged one another for decades in proxy wars throughout the Third World in a tug and push of influence and political superiority, the world is now bearing witness to a rebirth of this age-old bipolarity within the international system. It can be seen in the context of a Cold War for the 21st century.

In China, history is taught as to indoctrinate the populace according to the vision and agenda of the communist cadre, the ruling elite. Mendacity and lies are therefore spread via the government-controlled, mass media to prevent unrest and insurrection. This is necessary in any form of government that stifles individual liberty and subverts the rights and dignity of the individual to the needs and desires of the state. In other forms of government, including social democracies, the state runs the risk of violence and revolution by an electorate that is not property indoctrinated and is not subservient to the needs of the ruling elite. The British crown bore witness to this beginning in 1776 with the Thirteen Colonies.

What should the United States strategy be towards China in the 21st century?

We witnessed the fall of Soviet communism in the 1990s. We saw a divided Europe and Eurasia come to life with the breath of freedom beginning with the fall of the Berlin Wall. We will have to see if this happens in totalitarian China.

Does military power and strength come close to rivaling the strength and moral courage of free men and women?

Can all military conflicts be averted with the superiority of ideas? In some cases: yes. We witnessed the Cold War end without a shot being fired directly between the United States and the former Soviet Union.

Can our current government and administration achieve such a formidable task?

Could the United States defeat China militarily? Surely many at the Pentagon say yes and invariably other defense experts say no.

The crux of the conflict isn’t so much bombs, bullets or troops or what comes out of the Politburo or the latest economic indexes. The heart of a successful defense posture lies in the inherent goodness of the people of the nation and the structures, systems, and institutions that result from this. I refer to the virtues of a free market economy, a constitutional republican form of government, and a foreign policy that reflects these virtues and values for the rest of the world.

The United States must assert bold leadership on these fronts and adopt policies that will accomplish this. To date, we have not seen this in the United States with the current Democrat administration and its allies in Congress.

Despite Hegel’s admonition that people do not learn from history, we must still heed Santayana’s warning and implication that if we don’t learn from history, we are doomed to repeat its worst episodes. The Cold War wasn’t great for the world in its 45 years of tension, unrest, and proxy wars. It won’t be good for the world in the 21st century either, especially if it suddenly turns hot as it threatens to do in the Ukraine and, more apropos here, over Taiwan.

We must act today in order to avoid another potentially costly and all-consuming conflict of national and international effort. Serious conflicts can be avoided with superior ideas and statesmanship.

This article may be cited as: Harden DP. Competing Political and Economic Systems: China Versus the Free World. HaciendaPublishing.com, May 30, 2022.  Available from: https://haciendapublishing.com/competing-political-and-economic-systems-china-versus-the-free-world-by-douglas-p-harden.