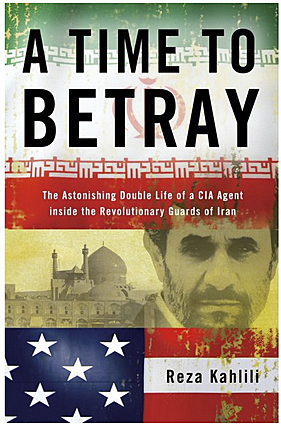 A Time to Betray: The Astonishing Double Life of a CIA Agent Inside the Revolutionary Guards of Iran by Reza Kahlili is one of the most heartrending and enthralling accounts I have ever read of courage, dissimulation, and personal suffering in the genre of espionage memoirs. This is the story of a courageous man, who justly betrays and risks his life (and that of his family) to fight surreptitiously against the cruelties and injustices of the ruling government of his native country — Iran. This book struck a personal cord with me because it reminded me of painful and regretful similarities that beset my own family in my native country, Cuba, just before and after the Revolution that brought to power the dictatorship of Fidel Castro and his brother Raul in 1959.

As a very young child, I remember various members of my family arguing passionately (but amicably) for and against the dictatorial government of Cuban President, Fulgencio Batista, his coup d’etat and dictatorship, his trampling on the legendary Constitution of 1940, the lack of political rights, the cruel imprisonment, and systematic torture of rebels captured while fighting against his regime (an opposition in which my own parents played a clandestine part), etc. I remember my favorite great uncle arguing and warning us about the malevolent changes that the victory of the revolutionary “barbudos” could bring about — but my parents did not listen, and came to regret it! After the triumph of the Revolution in 1959 and the establishment of communism in Cuba, there were indeed drastic “changes,” but this militated changes were for the worse — the inception of a culture of deception, oppression, and terror — and there would no longer be friendly political discussions among families, but only mistrust, dissimulation, and fear.

Eerily, the same thing happened in far away Iran in 1979 with the fall of the Shah Mohammed Reza Pahlavi, the takeover of Iran by the mullahs and the Ayatollah Khomeini, and the inception of a brutal Islamic Republic. Our hero, young Reza Kahlili (a pseudonym) was brought up in a close, prosperous family in Teheran. He remembers the “good old days” of traditional  festivities, gatherings, his loving grandfather patriarch defending the ruling Shah of Iran, his ruling dynasty, and the old Persian mores in amicable and engaging conversations among family members. Living in such a warm and jovial atmosphere, Reza, could not have imagine the horrific changes that would be brought about so rapidly in Iranian society with the advent of the “Islamic Republic,” which he joined with excitement after returning to Iran from studying abroad in California.

Nor could he have ventured to guess most of his family and closest childhood friends would so soon be devoured by the Revolution, persecuted by the Iranian Revolutionary Guard, in which he compliantly served the tyranny. The proverb says “be careful what you wish for; you might just get it.” Alas, that is what happened for those who wanted change in Cuba and Iran, deriding and helping to overthrow Batista in Cuba and the Shah in Iran by revolution. Many of those citizens themselves would end up crushed by Castro and the Ayatollah — who turned out to be significantly worse tyrannical figures than their predecessors. And the tragic concatenations that followed in both countries in their wake have not yet ended!

But let us now part from the comparison and focus on Iran and our hero, the subjects of this book. This is an excellent tome, expertly written, personal, passionate, and although it reads fast, like a suspense thriller, it also has interspersed background material recounting brief episodes in the history of Iran that are necessary to the narrative. For example, we learn the Iranians had mixed feelings about (and many resented) the British and Americans, among other reasons, because of interference in their nation’s affair. For example, in 1953 those governments, using the CIA as a vehicle, helped overthrow the democratically elected president of Iran, a (militant) nationalist, Muhammad Mussadegh, who had nationalized the oil industry, and had forced the Shah (a friend of the West) to flee the country.

It is also of historic interest that, as I remember a few years back in 2007, the Iranian president Mahmoud Ahmadinejad, defending his country’s right to a nuclear program, stated, “the country of Iran was heir to a great empire and home to a 2,500-year civilization.” I was surprised at the statement, as I always thought the conquests of Mohammed and the religious and cultural revolution of the 7th century, imposed by the victorious Arabs on the conquered Sassanid Persians, had resulted in a new and distinct Islamic nation. Moreover, with the fall of the Pahlavi Dynasty, the last Persian monarchy, the drastic changes brought about by the revolution of 1979, and the inception of an Islamic Republic (a virtual theocracy), had brought about yet another even more distinct nation. Iranians have a long cultural history as Persians and speak Farsi. Arabs have a more recent civilization, attaining historical distinction with the conquests of Mohammed and speak Arabic. I was gratified that Reza’s loving grandfather and many other more secular Iranians, cognizant of their heritage, agree with my cultural interpretation. These Iranian nationalists and traditionalists think of themselves heir to a distinct but vanishing Persian civilization that had been suppressed culturally by Arab Islamism, and more recently, politically, by the tyranny of the mullahs and the ayatollahs.

I will not reveal the heartrending stories of cruelty and betrayal, as well as dissimulation and courage, that revolve precariously around our hero Reza, who, as a member of the feared Iranian Revolutionary Guard, courageously spied against the cruel regime he ostensibly served. Suffice to say, the brutality of the regime against his friends and the Iranian people changed him into leading a double life, spying for the CIA for over a decade. Among the information Reza provided to the CIA was vital intelligence that probably prevented the collapse of the Saudi government. The Iranians had planned to use the hajj, the religious pilgrimage that Moslems must make to Mecca, to stage a coup d’etat in Saudi Arabia. Armaments were sent by the Iranians for the hajj, but most of these were intercepted and many of the militants arrested beforehand, foiling the insurrection. Other information was communicated to the U.S. at great peril, but not necessarily used properly by the American government, which was bent on placating the mullahs through various administrations.

The double life took its toll, but Reza persisted in his clandestine espionage with the thought of bringing about genuinely real change for the betterment, the attainment of freedom, and improving the life of his countrymen. How he did his self-appointed mission, and how he survived spying at great personal risk from within the belly of the infernal beast are the enthralling subjects of this book.

Without reservations, this heartrending thriller is highly recommended for those who enjoy non-fiction thrillers, recent history, and passionate espionage accounts. Be ready to stay anxiously at the edge of your seat and hold back irrepressible tears of commiseration, sorrow and outrage! I assign it a 5-star rating.

Miguel A. Faria Jr., M.D. is the author of Cuba in Revolution: Escape from a Lost Paradise (2002) and of other books and numerous articles on politics and history, including “Stalin’s Mysterious Death” (2011), “The Political Spectrum — From the Extreme Right and Anarchism to the Extreme Left and Communism” (2011); “America, Guns and Freedom” (2012);”Violence, Mental Illness, and the Brain — A Brief History of Psychosurgery” (2013), etc., all posted at his website haciendapublishing.com

This article may be cited as: Faria, MA. Spying from the belly of the beast in the Revolutionary Guards of Iran, a book review. Haciendapub.com December 1, 2013. Available from: https://haciendapublishing.com/spying-from-the-belly-of-the-beast-in-the-revolutionary-guards-of-iran/

(A Time to Betray: The Astonishing Double Life of a CIA Agent Inside the Revolutionary Guards of Iran by Reza Kahlili. Simon and Schuster, New York, NY., 2010, pp. 340.)

The photographs used to illustrate this book review for Hacienda Publishing came from a variety of sources and do not appear in Kahlili’s, A Time To Betray.