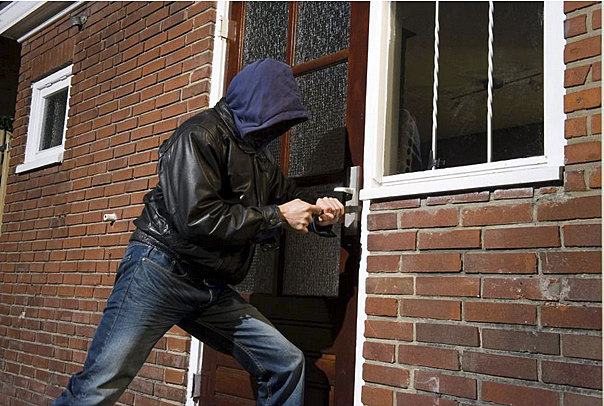 A Nation of Thieves

Writer’s note: Difficult as it is to be critical of a friend and ally on the war on terror, Great Britain has instituted a cruel and unjust gun-control policy, a worsening evil, upon her law-abiding citizens that needs correcting. The title of this essay comes from the seemingly paradoxical unrelenting tide of thievery and burglaries that has swept Great Britain, and was so dubbed by the London Sunday Times in 1998.

Have you read about the strange case of Tony Martin and Britain’s du jour gun-control injustice? In the October 2003 issue of America’s 1st Freedom, Wayne LaPierre, NRA executive vice president, revealed in perfect clarity how Great Britain’s stringent gun-control laws and abolishment of the right to self-defense have brought the birthplace of classical liberalism to the footsteps of tyranny.

Who are the bad guys?

Briefly, 57-year-old British farmer, Tony Martin, who lived in a remote farmhouse in England and had been terrorized several times by burglars, shot and killed such an intruder in his home. Another thief accomplice escaped.

For this act of self-defense in his own home ­ and in the same country where the great statesman Sir Edward Coke (1552-1634) declared boldly that a man’s home is his castle ­ a free citizen, Tony Martin, was sentenced to life imprisonment as “a danger to burglars!”

While Martin languished in an English prison, the other thief went free after spending only 18 months in jail. The British government granted the felon, who had previously been convicted of 34 crimes, 5,000 pounds of taxpayers’ money as legal aid to file a lawsuit against Martin for emotional distress. Incredible, but true!

It is not surprising, then, that in London, a person’s chances of being mugged are six times greater than in the Big Apple! Nor should it surprise anyone that in England, day burglary is commonplace and dangerous because burglars know that even if the homeowner is present, they are defenseless and at the “mercy” of the thief.

Tony Martin was freed after serving four years in prison, but today, he is forced to live in safe houses in fear for his life. Threats have been made against Martin’s life by other thieves and relatives of the dead burglar: “He will get it. Something will happen to him, it’s got to … To those who say it’s just talk, I’d say wait and see. The detectives can’t be with him all the time, can they?”

As reported in “America’s 1st Freedom,” another conspirator boasted, “He is a dead man … It will be a proper hitman, a professional job.”

Martin cannot be protected from the thieves by the police, nor as a convicted felon can he leave Britain. Least of all, he cannot use a gun for self-protection.

In Great Britain today, draconian gun-control laws are firmly in place and there is no right to self-defense. All handguns are banned in places of business and even in the home. Firearm registration facilitated disarmament and confiscation in 1998. Simple possession of a firearm carries a 10-year prison sentence, and yet, England’s pusillanimous criminal-justice system emphasizes rehabilitation of hardened criminals and revolving prison doors for all habitual thieves and burglars.

The thieves in the Gulag Archipelago

Recently, while scouring through the epic volumes of Aleksandr Solzhenitsyn’s “The Gulag Archipelago” ­ III and IV ­ I discovered some interesting observations made by the illustrious Nobel Prize-winning author about the nature of thieves in the former USSR “in freedom” as well as in the gulag’s corrective (destructive) labor camps. We learn that in the Soviet Union, even at the height of Joseph Stalin’s reign of terror and bloody purges (at least 20 million lives), the thieves were considered “socially friendly” elements, and were useful and used extensively by the Soviet government.

The thieves not only terrorized the population as haters and defilers of private property, but were also used as informants, and in the gulags as “instructors” in the cultural and educational sections or as officers by the internal security police (the MVD). Needless to say, they were also useful to the repressive apparatus as the proverbial stool pigeons and enforcers of hard labor and terror against ideological (political) prisoners. When needed, they even worked hand in glove with the security forces in carrying out mass murder in the extermination camps of the gulags.

While citizens were arrested, hauled up to the gulags for slave labor and saddled with long prison sentences (10- and 25-year sentences were typical), Solzhenitsyn writes:

Sentences [for the thieves] were bound to be reduced and of course for habitual criminals especially. Watch out there now, witness in the courtroom! They will all be back soon, and it will be a knife in the back of anyone who gives testimony!

Therefore, if you see someone crawling through a window, or slitting a pocket, or your neighbor’s suitcase being ripped open, ­shut your eyes! Walk by! You didn’t see anything!

In the destructive-labor camps of the Soviet Union (1918-1956), the thieves robbed, tortured and murdered political prisoners with impunity. Indeed, they were rewarded with higher food rations, better living space and other privileges for collaborating with the guards and fomenting terror.

It makes hair stand on end when we see that parallels can be drawn between today’s coddled thieves of the soft-left (social) democracy of Great Britain and the erstwhile, hard-left communist utopia of the former USSR.

Solzhenitsyn writes that fear of exceeding the limits of self-defense for individual Soviet citizens “led to total spinelessness as a national characteristic” on the part of the individual and total omnipotence on that of the criminal state. When a military officer, mind you a Red Army officer, defended himself from an assailant and killed the hoodlum with a penknife, the officer got 10 years for murder. “And what was I supposed to do?” the officer asked. The Soviet prosecutor replied: “You should have fled!”

“Flee!” That distant Soviet echo reverberates in modern British society ­ “Scream, run, shout!” ­ and not only in the United Kingdom, but also in other former members of the British commonwealth, such as Canada and Australia. In those nations, there is no recognized right to self-defense, and citizens are also told to run and flee from assailants. Human dignity ­ self-defense, private property ­ out the window! But what if they cannot run and their shouts are not heard? Are women supposed to allow sexual predators to rape them? Tony Martin, who lived on an isolated 350-acre ranch, was told by the British constable that he should have shouted!

Astonished we learn (or relearn) from Solzhenitsyn that in the heavily militarized Soviet Union, “The State, in its Criminal Code, forbids citizens to have firearms or other weapons, but does not itself undertake to defend them!”

Moreover, he writes, “The State turns its citizens over to the power of the bandits ­ and then through the press dares to summon them to ‘social resistance’ against these bandits. Resistance with what? With umbrellas? With rolling pins? First they multiplied the bandits and then, in order to resist them, began to assemble people’s vigilantes (druzhina), which by acting outside the legislation sometimes turned into the very same thing.”

In England, people live in fear in their own homes, afraid of muggers and burglars ­ not even possessing the right to defend their homes, themselves or their families with any weapon, not to mention a firearm!

One cannot avoid seeing a resemblance between the permissiveness and obsequiousness extended to the thieves in Great Britain and in the Soviet gulags as “socially friendly” elements, as opposed to honest, law-abiding citizens in the British empire and the political prisoners of “The Gulag Archipelago.” Are law-abiding British citizens today playing the hapless role that the ideological political prisoners played in the former Soviet Union? If so, whom does the British government consider the real domestic enemies? Thieves? Terrorists? Or, honest citizens?

We hope the British come to their senses and begin punishing the real criminals, giving them their just desert; allow lawful, honest citizens to keep firearms for self and family protection; and cease their unjust policy of citizen disarmament. In other words, punish the thieves and real criminals and allow the law-abiding citizens to exercise their natural right of self-defense as is their due, and their right, in a free society.

6. Russian druzhina or Cuban “militia” used to fight bandits or other enemies of the people. A similar scenario took place in Cuba in 1959 when Fidel Castro in ascending to and consolidating power called forth his “militia” to disarm the opposition and the people. See Faria MA. Cuba in Revolution: Escape From a Lost Paradise. Macon, GA, Hacienda Publishing, Inc,, 2002, pp. 62-64.

This article may be cited as: Faria MA. A Nation of Thieves. WorldNetDaily.com, October 17, 2003. Available from: https://haciendapublishing.com/a-nation-of-thieves/.

This article originally appeared on WorldNetDaily.com at http://www.wnd.com/index.php?fa=PAGE.view&pageId=21323.

1 thought on “A Nation of Thieves”