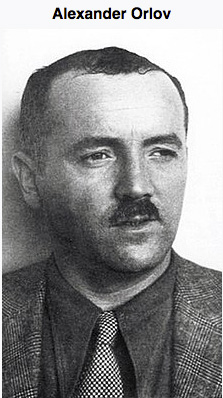 The Astounding Case of Soviet Defection Deception by Miguel A. Faria, MD

In Alexander Orlov: The FBI’s KGB General (2002), former FBI agent Edward Gazur tries to prove the impossible ­that KGB General Alexander Orlov was a true defector, a man who switched allegiances from the Soviet Union to America and repudiated international communism.

Gazur ardently believes that Orlov, who became his friend and whom he ultimately came to love as a father figure, genuinely cooperated with the FBI and the CIA. Gazur’s book unfortunately proves quite the opposite.

Orlov did denounce Stalin, who had annihilated many of his compatriots in the various purges, but he was not a defector in the true sense of the word, and he did not deserve the honors or the protection this country extended to him and his family.

Orlov never fully cooperated with U.S. authorities and certainly did not help preserve the freedom and security of the country that sheltered him and his family during their many years on the run from the KGB, as well as the 15 preceding years when he hid from the FBI and CIA.

Curiously, Gazur wrote his tome after an FBI colleague brought to his attention a book titled Deadly Illusions by John Costello and Oleg Tsarev (1993), based on recently opened KGB files that presented Orlov in a very different light. Gazur was astonished: “What I read about Orlov and the man I knew personally and called a close friend seemed to be two entirely different people.”

Indeed! What Gazur wrote in his book, by commission or omission, actually indicted the KGB officer and revealed that Orlov had perpetrated one of the most astounding cases of defection deception in U.S. history.

Nevertheless, the book should not be completely discarded. Three genuinely interesting pieces of information come to light that deserve mention and careful consideration by history buffs and scholars of communist historiography in the 20th century.

First of all was Orlov’s masterfully executed plundering of the Spanish Treasury during the Spanish Civil War, when three-fourths of Spain’s gold reserves were moved to (stolen by) the USSR.

Approximately 7,900 boxes, each containing 145 pounds of gold cast ingots and gold coins, a fabulous national wealth accumulated through the centuries and extending to Spain’s Siglo de Oro, were “transferred” by the communist-socialist leaders of “Republican” Spain to Joseph Stalin and the USSR for “safe keeping” during the civil war.

Needless to say, the Soviet Union (and now Russia) never returned the gold. As Stalin told KGB Chief Yezhov, “They will never see their gold again, just as they do not see their own ears.” To their everlasting shame and for their unforgivable betrayal of their country — not to mention incredible stupidity — the Spanish leaders “had made a tragic blunder of gargantuan proportions.”

Second was the exposition of Joseph Stalin’s “horrible secret,” namely that the Red dictator, as a young revolutionary, had once been an informant for the Tsarist secret police, the Okhrana. Stalin, in fact, spied on and informed on his fellow revolutionaries prior to the October 1917 Russian revolution.

Thirdly, as a result of this “horrible secret” becoming known to several top Communist Politburo and Soviet military leaders, Marshall Mikhail N. Tukhachevsky, a hero of the Soviet Union, and eight other generals became involved in a plot to overthrow Stalin.

They were summarily executed following conviction by a kangaroo court, not on the trumped-up charges of treason for conspiring with Nazi Germany, but in reality for leading a coup to rid Russia of one of the worst mass murderers in history, Joseph Stalin.

In the minds of these conspirators, Stalin’s “horrible secret” was the last straw of the tyranny to break the camel’s back. They were now ready and willing to risk it all with the ill-fated coup, a coup that unfortunately was nipped in the bud by Stalin’s henchmen in the secret police before it could come to fruition.

While this book does not prove the author’s thesis, Gazur has written an interesting apologia for the elusive career of the KGB general. We learn how the Soviet general survived in the U.S., eluded the CIA and FBI for 15 years, and then managed to give the INS as well as the FBI and CIA enough tidbits of information and circumlocution to enable him to remain in the U.S. legally while remaining virtually in hiding.

Orlov was sheltered and protected in the U.S. from the wrath of Joseph Stalin (whom he had effectively blackmailed with his threat to reveal Soviet secrets if pursued by Soviet KGB agents), but he did not betray the USSR or any of the Soviet agents who had operated or were still operating against the U.S. and the West.

Orlov passed on historical trivialities and personal anecdotes, skillfully navigating himself among congressional committees and half-hearted debriefing sessions by American security agents but never revealing specific information that could have been helpful to the U.S. and the West during the Cold War.

More apropos, Orlov did not expose the British traitor Kim Philby or any others in the Cambridge spy ring, who so much harmed this country and the West. Neither did Orlov expose specific Soviet operations undermining the security of the U.S. In fact, Orlov did not even reveal to Gazur that he had traveled to England —­ not to mention that he had headed for a time the notorious spy ring and handled the British agents himself!

Thus, it is with these reservations that I would recommend this book only to knowledgeable scholars who may want to find out some specific details about the Cold War and the Soviet KGB (and its predecessor agencies), with the caveat that these details are only selected pieces of information that the KGB general chose to reveal during 1971-1973, in the last few years of his life, to his friend and executor, FBI Agent Edward Gazur.

This book is by no means an authoritative, historic or literary biography of the elusive KGB General, Alexander Orlov, but should only be considered part of a jigsaw puzzle whose mismatched pieces are still to be fully assembled.

Miguel A. Faria Jr., M.D., is editor emeritus of the Journal of American Physicians and Surgeons (formerly the Medical Sentinel) and author of Vandals at the Gates of Medicine (1995), Medical Warrior: Fighting Corporate Socialized Medicine (1997) and Cuba in Revolution: Escape from a Lost Paradise (2002).

This article may be cited as Faria MA. The Astounding Case of Soviet Defection Deception. Hacienda Publishing.com, October 31, 2003. Available from: https://haciendapublishing.com/the-astounding-case-of-soviet-defection-deception-by-miguel-a-faria-md/

This article was featured in RealClearHistory.com on June 1, 2013.