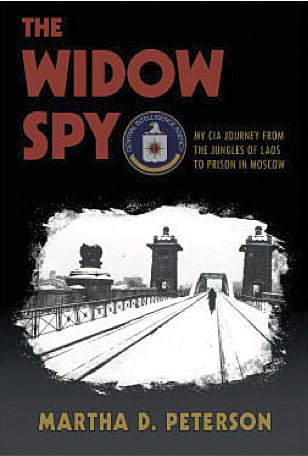 From courageous widow to avenging spy! A book review of The Widow Spy (2012)

The Widow Spy is a real-life thriller that begins with a seemingly typical American housewife, Martha (“Marti”) D. Peterson, who in an unusual gesture invites her two teenage children out to lunch. This is twenty years after the main events subsequently depicted in the book. She had remarried and was living what appeared to be the ordinary life of an American wife and mother. But what she flat out confesses to her astonished teenagers is that she worked for the CIA, had been previously married to an unknown American hero, and had a long story to tell them. Imagine their reaction — “Mom is a spy”! She takes the kids to the CIA compound, gives then a personal and emotional guided tour, and recounts the story of her “previous” life. She had spent over thirty years as a CIA officer, received commendations, and even met a Director of the CIA and an American president.

This is  truly a poignant and astonishing book that tells the fascinating story of this intrepid American woman, a woman who in 1971 accompanied her husband, CIA agent John Peterson, to Laos. This nation is a primitive country, a neighbor of both Thailand and Vietnam, a country that had been dragged into the Vietnam War. John and Marti had been married for less than three years and were a very happily married couple, always a team. John was a dedicated and decorated former Army Green Beret, who joined the CIA to continue serving his country. He was now serving as a CIA paramilitary officer in charge of the perilous task of infiltrating Laotian troops behind enemy lines.

American forces and the non-communist Laotian army were then fighting the communist Pathet Laos and trying to stop the North Vietnamese Army from sending troops and supplies down the Ho Chi Minh Trail. A little over a year after their arrival, in October 1972, John was killed in a mission while infiltrating his Laotian soldiers, shot down and burned in a horrific helicopter crash. One can imagine the young woman left alone in Laos, her husband killed by the communist enemy, just as the Americans had begun their retreat from Southeast Asia.

The young widow returns to the U.S. in shock. But instead of fading away, she decides to continue the fight her husband had begun against the communists. After recovering from her loss, she joins the CIA, is trained in CIA operations, learns to speak Russian, and is sent to Moscow, where she becomes a CIA case officer in clandestine operations. Because she is a woman, the KGB does not suspect she is a CIA operative.

Very pleasant and outgoing, she mingles with other embassy personnel and secretaries, who do not know she is CIA, which also helps her cover. To her surprise, she finds she is not suspected, not even under KGB surveillance, although some of her CIA covert associates do not believe that is possible. Sure of herself and convincing her superiors she is capable of eluding the KGB, she is given the dangerous task of servicing dead drops with a CIA agent, Aleksandr Dmitryevich Ogorodnik, a  Soviet official in the Soviet diplomatic service, code named TRIGON. Ogorodnik was the most important CIA spy in the Soviet Union at the time. TRIGON is a valiant Russian with a dangerous secret and a wonderful dream of defecting to and eventually settling in the free world with his paramour, a Colombian woman with whom he had carried on an affair in Bogota. It was there that he was recruited by the CIA. Knowing the risk he is taking, spying in the Soviet Foreign Ministry, TRIGON pleads the CIA for poison pills in case he is arrested. The CIA debates the issue and finally complies with his request. TRIGON supplies the CIA with vital intelligence used in American foreign policy against the Soviets.

Marti works diligently at her task from 1975 to 1977, when finally she is arrested by the KGB, while filling a dead drop site with a simulation concrete block filled with spy paraphernalia intended for TRIGON. (photo, left)  Unbeknownst to her and the CIA, TRIGON had already been arrested, betrayed by Soviet double agents. Marti is courageous and undaunted during and after her arrest. The fate of TRIGON is then unknown. This is a poignant human interest story, a suspenseful espionage thriller, as well as an unknown history chapter of the Cold War.

If you like these themes, get this engaging book and read it. It even has the pictures of the unsung heroes, our intrepid heroine, and other relevant illustrations. I highly recommend this book and assign it an excellent, 5-star rating!

Dr. Miguel A. Faria, Jr., a medical historian, is the author of Cuba in Revolution: Escape from a Lost Paradise (2002) and of numerous articles on politics and history, including “Stalin’s Mysterious Death” (2011), The Political Spectrum — From the Extreme Right and Anarchism to the Extreme Left and Communism (2011); Violence, mental illness, and the brain — A brief history of psychosurgery (2013), etc., all posted at his website HaciendaPublishing.com.

This article may be cited as: Faria MA. From courageous widow to avenging spy! A book review of The Widow Spy (2012). HaciendaPublishing.com, December 5, 2013. Available from: https://haciendapublishing.com/from-courageous-widow-to-avenging-spy-a-book-review-of-the-widow-spy-2012.

The photographs used to illustrate this book review for Hacienda Publishing came from Martha D. Peterson’s book, The Widow Spy. The photo of her actual arrest in Moscow in 1977 appears in both the International Spy Museum in Washington, D.C. and in the SVR/KGB museum in Moscow!