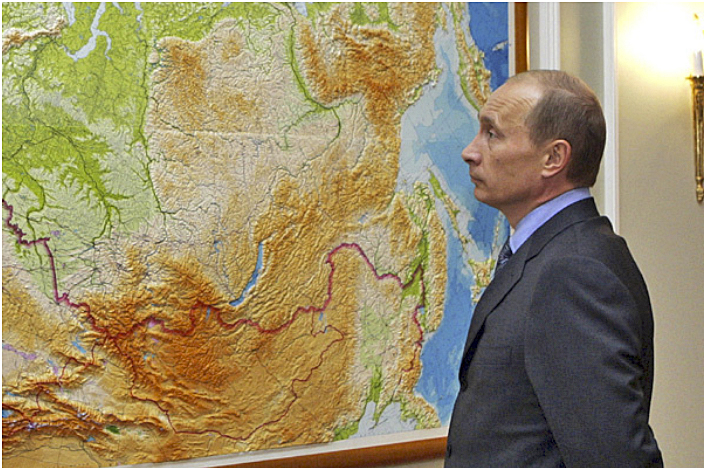 A major area of trouble is the Caspian Sea, formerly part of the USSR where several “Republics” bordered each other in suppressed animosities. Stalin took advantage of this to divide and rule, his legacy fomenting discord among ethnic minorities — while the Russian bear suppressed them all. Stalin’s policy lives on with Azerbaijan remaining at odds with Armenia, and Georgia with South Ossetia and Abkhazia. Azerbaijan is actually split in two by a strip of Armenian land, and it remains in conflict with the latter over the highly disputed Nagorno-Karabakh region within Azerbaijan.

Instability remains in these strategic geopolitical areas, rich in oil and other natural resources, pipelines, and nuclear concerns. If Russia were to again seize or even establish hegemony over the rest of Georgia, Azerbaijan, and the Baku oil field region, it would be a disaster for Turkey and the E.U., which is still theoretically allied to the United States via NATO. A look at the oil pipelines going through Georgia in the Caucasus tells the story. From the Baku oil fields, pipelines run from Azerbaijan to Russia as well as through Georgia and Turkey to the West.

The West — and now China and India in the East — need coal, natural gas and oil; and with the ever-increasing world population and consumption of resources, energy supply is a growing concern for the entire world, including the U.S. Many people with contempt (implying superior knowledge) dismiss troubles in the Middle East as “it is all about oil!” But then, in their next breath they complain about the price of gas and the profits of the oil companies, not understanding the importance of these regions in terms of geopolitics. The boast last year by General Nikolai Makarov, Chief of the Russian General Staff, who many thought was bluffing, was fulfilled with the Ukraine. As Erick Erickson, for once being right, pointed out there are “chickens roosting in the Crimea,” and the Obama administration may be partially to blame!

Much of what you write here, as always, is true, but some assumptions are not entirely correct. Invasion? Yes, there were maritime landings of Russians in the Crimea, as well as tightening of a loop of bellicose Russian troops all around the Ukraine, while “Pro-Russian” minions, acting from the inside, did the dirty work as a Fifth Column!

It is a miracle there has been no bloodshed, the result of prudence on the part of the Ukrainians. Let me repeat what I stated in my opinion article:

“The neighboring nations, like the Russians themselves, have much to learn about constitutional government and the rule of law, but they most do so without Russian threats and aggression.”

The pro-EU forces did act thuggishly and undemocratically, but the “democratically elected government” of the Ukraine under President Viktor Yanukovych also acted undemocratically and was not angelic, flagrantly abused power, violated civil liberties (imprisoning political opponents under trumped up charges, as with Yulia Tymoshenko and others), placing the interest (and fear) of Russia above those of the Ukraine in the eyes of many observers.

Yulia Tymoshenko, a businesswoman who led the Orange Revolution and a former Prime Minister of the Ukraine, spent three years in jail under horrendous conditions (affecting her health adversely) purely for her pro-Western political beliefs and state policies. If imprisoning political opponents may be democratically justified (majority rule), it certainly is not under constitutional governance in a free society under the rule of law.

Regarding the Crimea, the Soviets placed it within the “Ukraine Republic” under the USSR, from the time Lenin appointed Stalin as Commissar of Nationalities (1917-22; based on his expertise gained by Stalin’s authoring his famous report on nationalities in 1914, “Marxism and the National Question”). Stalin used his power and the bureaucracy to convert the union of nationalistic republics into a totalitarian Soviet state. Before that the Crimea was part of the tsarist Russian Empire, as were Georgia, Byelorussia, all of the Ukraine, and most of the so-called Soviet Republics.

Ironically the Crimea was the last stronghold of White Russians fighting for their lives in 1919-1920 against the advancing Red Army. General Kolchak’s armies disintegrated in Siberia, while General Denikin retreated to the Crimea. There Denikin demoralized resigned his post to Baron Wrangel, the White Army general who had the unenviable task of evacuating the peninsula, the last anti-communist stronghold, leaving it to the advancing, victorious Red Army of seasoned Bolsheviks.

Since that time, the Ukraine, including the Crimea, has been a place of sorrow, famine, and death under Russian communism. Khrushchev presided over a virtual genocide of the Ukrainians, massacring kulaks and forcing collectivization of farms for Stalin. All of this is well recounted by Robert Conquest in his books and documentaries. The Ukraine was the somber nation of assassinations of political leaders (e.g., Stepan Banderas) and the extermination of brave, anticommunist freedom fighters, workers as well as rebellious peasants, resisting Stalin and Khrushchev, and subsequent Russian tyrants imposing communist rule. The collective leadership in 1954, taking a page from Stalin’s book of fomenting divisiveness and discord among minorities, ceded the Crimea to the “Ukrainian Republic” to keep that nation divided, as we see now!

As to the Crimean democratic, self-determination plebiscite, not allowing the rest of the Ukrainians the vote to participate, “it is interesting to ponder what the official response” in Washington DC, London, or Beijing would be to an organized attempt to have self-determination plebiscites conducted in pockets of ethnic populations or boroughs in the suburbs of London or residual islands of the Indian Ocean in the British Empire, Bermuda, Gibraltar, etc.; Hong Kong, Tibet, or rather all of Sinking, for China; or U.S. territories in the American Samoa, Guam, the Aleutian islands, even El Paso (Texas), or Indian Reservations claiming large tracts of land in such states as Arizona, New Mexico, Oklahoma, etc.? The repercussions would be enormous. How small a population needs to be before ethnic groups gather to vote their own sovereignty over a territory they claim? The way our country is headed much of the South may well want to have a plebiscite for possible secession! I strongly suspect this might be the unspoken reason of why some Southerners are wishing for a Convention of States to take place. As always, I appreciate your thoughtful, instructive, and always challenging comments!

So, Russia has annexed Crimea (it was part of Russia until 1954). Rushing into action (no pun intended) the fearsome John Kerry/Barack Obama foreign policy juggernaut belatedly slapped tiny sanctions, not on Russia proper, but against 11 rich Russian oligarchs over the Crimea situation.

Our policy experts did not sanction the country that broke U.N. treaties but did sanction apparently unconnected Russian oil company executives? What kind of smoke was in that meeting room?

I believe they all live in fear of Vlad Putin and his “put Russia first” leadership. The KGB tough guy disrespects the community organizer. Go figure. Putin has no need for Obama’s approval for anything. He will do what’s best for Russia, no matter the blather from Washington, D.C. That must really confuse American liberals. Imagine, being proud of your own country. How quaint! — Letter writer John Brogden, March 31, 2014

…While Obama and his unserious advisors in a western world, grown too unserious about reality, focus on unserious topics [e.g., climate change, unisex bathrooms, income inequality, etc.,] other nations of the world continue to jockey for national interest and Kremlin tanks continue pouring into Ukraine. —Submitted by admin on March 7, 2014

…Until last week [Russian invasion of the Crimea], we lived in a world where the West had grown comfortable that Francis Fukuyama was right, and history had ended. Events would still happen, but the world would inevitably evolve toward liberal democracy. We all learned in college that liberal democracies were more stable and least prone to violence of all forms of government. Barack Obama, the British prime minister, the French president, and the rest of the West could sit around tables fretting about the environment, income inequality, unisex bathrooms, gay marriage, and other issues. The West had concluded there were no longer national interests, but global interests where we would all win or all lose together.

It is the foreign policy view of the naive elite in comfortable times detached from the real world… Erick Erickson, GOPUSA.com, March 7, 2014

This article may be cited as: Faria MA. Geopolitics & Trans-Caspian Baku Oil Pipeline — A Conversation with Dr. Miguel A. Faria. HaciendaPublishing.com, March 7, 2014. Available from: https://haciendapublishing.com/geopolitics–trans-caspian-baku-oil-pipeline–a-conversation-with-dr-miguel-a-faria.