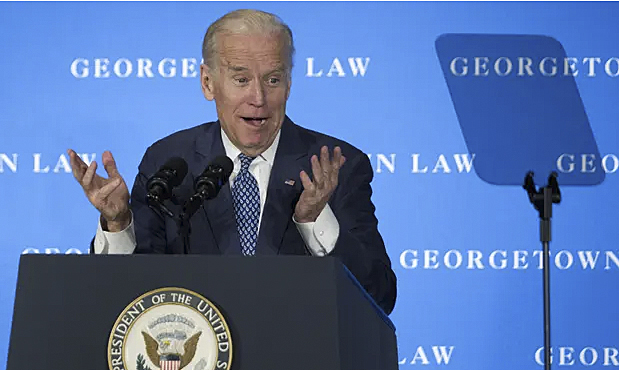 The Worst President in American History by Jeff Crouere

The descendants of Presidents James Buchanan, Andrew Johnson, and Jimmy Carter can relax. Their families will no longer be associated with a United States President deemed to be the worst in American history.

The current occupant of the White House, President Joe Biden, has seized this title after only eighteen months in office. His administration has failed without exception, from their handling of the economy to their disastrous military withdrawal from Afghanistan.

Violent crime is increasing in large cities and drug overdose deaths have reached record levels.  The President’s disregard for border security has encouraged millions of illegal immigrants to enter the country during his administration. These calamities have been noticed by the American people, who blame the unmitigated disaster known as the Biden administration.

A recent YouGov poll indicated that a staggering 64% of the American people do not want Biden to run for another term as President. According to a new Civiqs survey, Biden’s approval rating is only 32%, his lowest ever.

On the issue of the economy, Biden has even fewer supporters. The latest Rasmussen poll indicated that only 27% of the American people give Biden a positive rating for his stewardship of the economy.

These poll numbers reflect the anger among the American people regarding Biden’s approach to the economy. His cancellation of the Keystone XL pipeline and his decision to issue a moratorium on federal drilling, coupled with his embrace of “green” energy policies and rejoining the Paris Climate Accords started a vicious cycle of increases in the price of oil.

Biden turned America from an energy independent country to one that is dependent on foreign oil. Due to Biden’s misguided energy policies, gasoline prices hit an all-time high and inflation soared to 8.6%, a rate not experienced by Americans in over 41 years.

These increasing expenses have overwhelmed any higher wages Americans have earned, so the typical family is becoming poorer. To survive, families are either cutting expenses, depleting their savings accounts, or charging more on their credit cards. Unfortunately, since the Federal Reserve just boosted interest rates dramatically to fight inflation, mortgage rates will increase, but so will credit card interest rates.

These higher mortgage rates will negatively impact the housing market. The biggest investment for most Americans is their home. Other investments have not done well either as the stock market has entered bearish territory. Investors understand our economy is in deep trouble. The combination of all these factors is causing anxiety and stress for millions of Americans, resulting in plunging consumer confidence levels and a decline in consumer spending.

Despite all these difficulties, Biden is unwilling to accept any culpability. He has blamed Republicans, “ultra MAGA” supporters, President Donald Trump, the media, the COVID-19 pandemic, and, most frequently, Russian President Vladimir Putin.

Unfortunately for Biden, none of these tactics are working as the Rasmussen poll indicates that 52% of Americans blame him, and not his scapegoats, for the country’s economic problems. Only 11% of poll respondents felt Putin was responsible.

Instead of acting to solve any of our nation’s problems, Biden and the Democrats have tried to distract Americans by focusing on gun control, the war in Ukraine, the January 6th hearings, and, most recently, abortion. Biden will attempt to take political advantage of the Supreme Court decision to overturn Roe v. Wade and return the power to the states to either outlaw, restrict or legalize abortions.

On Friday, Biden declared his disgust with the decision and implored Americans to give Democrats more seats in Congress so his party could pass legislation legalizing abortion. On abortion and every other issue, Biden divides Americans. Although he was advertised to the American people as a moderate who would unite the country, he has been a captive of the far left, who shows no inclination to moderate his policies.

Sadly, weak Republicans in Congress have given Biden legislative victories by passing his infrastructure bill and the most consequential gun control legislation in three decades. Biden has taken their votes without compromising his leftwing views.  Instead of working with Biden, Republicans should be opposing him at every turn.

As the midterm elections draw closer, Republicans need to present a bold agenda that is diametrically opposed to the President’s failed policies. The GOP should ask for a mandate. In contrast, Biden had no mandate for his unworkable progressive agenda. This is a major reason why Americans are so disgusted with his administration.

Americans also know that Biden is old, frail, and unable to effectively communicate. Without oratory skills, Biden cannot lead or inspire Americans. Instead, he often displays anger and impatience, not attractive traits for any President. Obviously, Biden has suffered a decline in mental acuity, but he refuses to submit to a mental competency test to reassure Americans.

With these limitations, it is not surprising to see that Biden is taking orders from others, either inside or outside the White House. For example, during his infrequent press conferences, Biden is overly scripted. During a White House meeting last week, Biden inadvertently displayed a note card giving him basic instructions such as enter the room and “YOU take YOUR seat.” Biden is a puppet who is angry that he is being controlled by others and cannot lead Americans because of his diminishing mental faculties.

Tragically, he has failed on every major challenge he has faced, while adamantly refusing to address the fears, hopes and dreams of the American people. In fact, he has destroyed the American dream.

There must be consequences for such an utter failure. It is time for “We the People” to make our voices heard. If the GOP wins control of Congress in the midterm elections, it is imperative that Republicans pursue impeachment charges against Biden.

His actions on the border and in Afghanistan merit impeachment and his ties to his son’s crooked business deals merit investigation. If not, the concept of impeachment is meaningless, and Republicans will have been exposed as political pushovers once more.