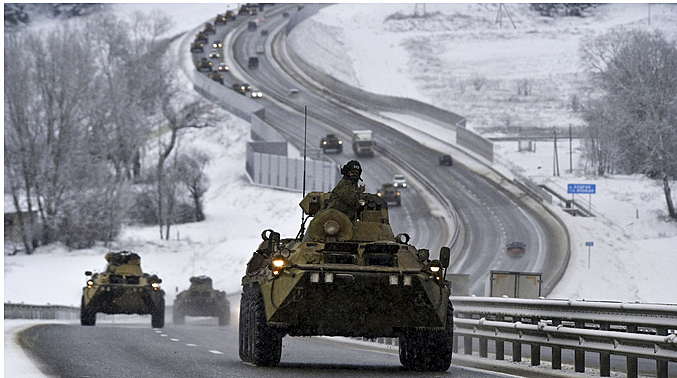 Secure Borders for Ukraine and America by Cliff Kincaid

Pete Hegseth of Fox News questions why Biden is worried about the borders of Ukraine and not those of the United States. The correct answer is that we should support secure borders for both countries and oppose Russian aggression.

Hegseth, a true patriot, served in the Middle East, and we thank him for his service. The difference between his wars and Ukraine is that the anti-communists running this former Soviet republic are not asking for American troops, only American arms. Why can’t we demand security for America and Ukraine? There is no reason we can’t do both.

As we demand security on our southern border, we should also affirm sovereignty for the U.S. and Ukraine while objecting to Russian aggression. Why is this position so difficult to understand and adopt?

We are not nation building in Ukraine. The country is already independent of Russia.

Some conservatives are frustrated that Biden won’t protect our own border and they take out their anger on Ukraine. Another factor is corruption in Ukraine and financial ties to the Biden family. But Russia is even worse. It supplied the dossier the Democrats used to investigate and impeach Trump.

Too much faulty logic is being displayed by personalities like Tucker Carlson that seems intended to benefit Russia and consign the fate of 40 million people to Vladimir Putin’s dreams of a new Russian empire.

On the surface, Biden is doing and saying some things that are correct about Ukraine. But we all know that he can’t be taken seriously. What conservatives should be doing is drawing attention to how the Bill Clinton and Obama/Biden Administrations disarmed Ukraine, putting that country at the mercy of Russian aggression today.

Everything that is happening in Europe is the result of pro-Russian appeasement policies set in motion by Democratic presidents.

To understand this bizarre state of affairs, consider the fact that Ukraine once had some 1,900 strategic nuclear weapons, the world’s third-largest nuclear arsenal.

My column, “How Clinton and Obama Disarmed and Abandoned Ukraine,” explains all of this. In exchange for Ukraine removing its strategic nuclear weapons and sending them to Russia, the Budapest Memorandum confirmed that the United States, Britain and Russia “reaffirm their obligation to refrain from the threat or use of force against the territorial integrity or political independence of Ukraine, and that none of their weapons will ever be used against Ukraine except in self-defense or otherwise in accordance with the Charter of the United Nations…”

Clinton/Obama/Biden have created the conditions for the Russian attacks on Ukraine.

Now, Biden postures as a friend of freedom, while “conservatives” like Tucker Carlson of Fox News act indifferent to the fate of Ukraine and seem willing to turn the country over to Russia. In effect, Tucker is adopting the old Biden position.

In the face of the Biden betrayals, and his too-little-too-late approach, conservatives should not excuse Russian aggression. We should support border security for Ukraine and the United States. That’s the consistent and principled position. That’s the conservative position.

A country without borders is not a country. That applies to the U.S. and Ukraine.

Remember that an anti-communist revolution is still underway in Ukraine and that we need something like that here, in the United States. We have to support the people of Ukraine and encourage anti-Russian resistance.

Tucker Carlson isn’t the only prominent pro-Russia “conservative” indifferent to the fate of Ukraine. I just got an email message from Ilana Mercer, a contributor to the conservative Townhall website, saying, “With central and eastern Europe being swallowed up progressively by the NATO alliance, Russia has legitimate security concerns. Abutting its border, Russia will soon have to endure all NATO members carrying out military maneuvers.”

Among other things, she seems ignorant of the fact that Russia is attempting to swallow up Ukraine, despite signing an agreement, the Budapest Memorandum, guaranteeing Ukraine’s independence.

This is the kind of pro-Russian disinformation conservatives are getting from the likes of Tucker Carlson and Steve Bannon and others of their ilk.

We are faced today with the prospect of a Russian war on Ukraine that is made possible because the Obama/Biden Administration failed to provide Ukraine the weapons the country needed while draining financial resources away from a major Ukrainian gas company to the Biden family.

As president, Trump, under assault as an alleged Russian agent, demanded that Ukrainian authorities investigate the corruption that was making the country weak in the face of the Russian threat. For this, Trump was impeached.

Even so, Trump helped Ukraine far more than Obama/Biden.

As noted by Senator Tom Cotton, “For four years, Democrats maligned President Trump as weak on Russia. In reality, Mr. Trump put pressure on the Kremlin by killing the Intermediate-Range Nuclear Forces Treaty, increasing NATO defense spending, and providing lethal aid to Ukraine, among other actions. This effectively deterred a renewed invasion or any big brinkmanship along the Ukrainian border. Mr. Biden’s feeble foreign policy has invited his aggression.”

As Cotton indicates, the situation has change dramatically under Biden. His family took money from Ukraine while failing to help the country defend itself — until it now seems too late.

This is not the time for conservatives to go wobbly.

To be sure, the use of American troops in Ukraine cannot be justified without Congressional approval, and there is no reason for Congress to approve such a deployment, with the U.S. Armed Forces in disarray over political correctness and unreasonable vaccine mandates.

Conservatives can oppose American troops in Ukraine while supporting the country’s independence and sovereignty. There is nothing contradictory in this position. It is the right thing to do.

What they should be worried about is Russia-China collaboration, at a time when the China virus continues to claim American lives, and seek ways to undermine both of these dangerous adversaries.

If we ignore the fate of Ukraine and sacrifice this country to Russia, we will be jeopardizing the future of freedom around the world. This surrender will send a strong message to other enemies as well.

This article may be cited as: Kincaid C. Secure Borders for Ukraine and America. HaciendaPublishing.com, February 1, 2022. Available from: https://haciendapublishing.com/secure-borders-for-ukraine-and-america-by-cliff-kincaid/.