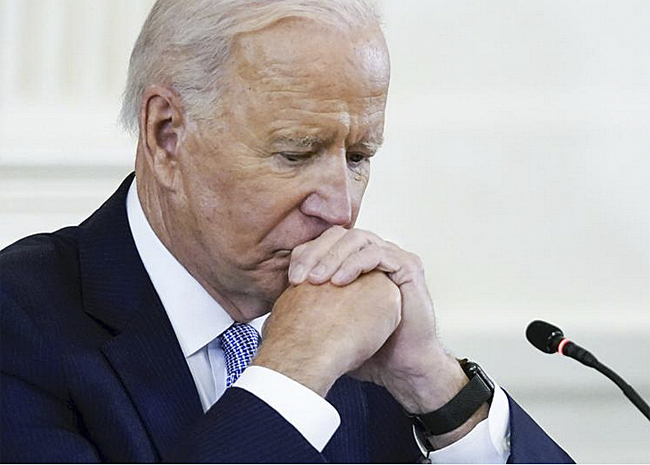 There’s nothing socialists and communists hate more than a disorganized dictatorship, unable to consolidate power. As a result, the plan for Biden’s $3 trillion “human infrastructure” plan, described by socialist scholar Paul LeBlanc as “Socialist Convergence” for America through the Green New Deal, remains in limbo. The “progressives” are angry.

This rage represents an opportunity to save America from the abyss.

Looking at foreign affairs, the Biden effect is working to the advantage of our enemies.

America-friendly countries in Europe and Asia, such as Ukraine and Taiwan, are in grave danger. China Joe’s foreign policy, an extension of that practiced by Barack Hussein Obama, is designed to make it risky to seek the kind of freedom and independence we once had in America. Israel is even in danger of nuclear attack by the Russian-armed religious fanatics in Iran, who are now targeting former Trump officials for death in retaliation for the killing of Iranian terrorist commander Soleimani.

Here at home, however, the communists are desperate.

Written before Biden “won” the election, socialist scholar LeBlanc said, “It is possible and necessary to build a powerful mass socialist movement in the United States by 2030 that could be in a position to provide an effective challenge to capitalism and transition to a socialist democracy.” Biden’s “victory” moved up the timetable.

But “moderates” like Senator Joe Manchin are standing in the way. “Anger erupts after Manchin kills Build Back Better” was the message from the once Moscow-aligned but now pro-China Communist Party USA in an email to party cadre, referring to the multi-trillion dollar bill.

In the other body of Congress, the party is happy with Speaker Pelosi’s job, issuing a message, “House Democrats push for votes on human needs.” The “progressives” are running the show and passing a series of socialist measures.

The message is crystal clear — the House is controlled by communist-friendly forces while the Senate has yet to succumb to the revolution.

Another base of support for the communists, if you read the People’s World,  lies in various unions, including those running the public schools, as the paper highlights National Education Association President Becky Pringle as a leading “progressive.”

Covering the pro-communist NEA was one of the first assignments I had when I worked for the national conservative weekly newspaper Human Events, almost 40 years ago. The speaker then was “Berkeley Ron” Dellums, a Congressman from Oakland, succeeded by Rep. Barbara Lee, a trusted confidant of House Speaker Pelosi.

Lee, former chairwoman of the Congressional Black Caucus and a member of the Congressional Progressive Caucus, is perhaps best known for casting the lone vote in the House against U.S. military action to remove the Taliban regime in Afghanistan after the 9/11 attacks. The Taliban had harbored the al-Qaeda terrorists responsible for 9/11.

In her book, Renegade for Peace & Justice, Lee declared her support for “a world vision of peace” and a Cabinet-level Department of Peace. She favors big cuts in the Pentagon budget and reliance on the United Nations in foreign affairs.

In the context of the “one-year anniversary of the Trumpite insurrection and invasion of the U.S. Capitol,” as the communists describe the events of January 6, the demonization of Trump is a clever tactic, designed to divert attention from the socialist takeover of the major institutions of government.

The left-wingers once started a group called “Move On” when they got tired of the effort to impeach President Clinton, a liar and philanderer.

However, with the economy in shambles under China Joe, it is apparent many people want to “move on” from the current administration. Hence, the “progressives” are desperate to consolidate power. Time is running short, as mid-term elections in 2022 approach.

But is House Republican Leader Rep. Kevin McCarthy the man to lead America out of the current predicament?

Staunch conservative and former Rep. Steve King’s new book, Walking Through the Fire, describes in detail how the GOP leadership, led by Kevin McCarthy, forced him out of Congress through lies and collaboration with the New York Times.

In an interview, he provided the inside story of moral corruption in the Republican establishment and names the names of the next conservative members being targeted for destruction.

In any case, Biden is facing opposition from other quarters. Various courts, including the Supreme Court, are striking down an assortment of unconstitutional executive orders on matters such as vaccine mandates and open borders that emanate from the White House occupied by China Joe.

China Joe’s promise to “shut down” the virus is in tatters, as people get sick and die with no end in sight and there are no tests to gauge the extent of the calamity.

Sensing this is an administration without even an amateurish degree of competence, Biden’s former advisers in the health field are now telling the American people this is the “new normal” and they just have to get used to it. Forgive and forget that China unleashed this monster on America and the world, and that China is undergoing additional lockdowns as the virus mutates and cases of hemorrhagic fever are documented.

America is the real target, the ground zero, for the next variant or disease that China decides to unleash on the world, even while American athletes participate in what critics call the “genocide games.”

Every day Americans with a foot in the real world learn of more shortages in the economy, as goods and services are difficult to obtain when people need them the most. It turns out the COVID test shortages are a symptom of a problem much greater in the real economy. And China Joe has no plan to make things right, except to rely on an ill-informed Fed chief promising higher interest rates and more economic pain and suffering .

Instead, as the communist People’s World as trumpeted, echoing the unions, Biden is using Donald J. Trump as the real threat, blaming the former president “for leading the ongoing conspiracy against democracy.”

The communists have completely embraced China Joe, perhaps as their last best hope to impose socialism on America and weaken it further in global affairs.

At the same time, the communist paper recognizes the Supreme Court as an obstacle on the path to dictatorship, insisting there is a GOP majority on the Court standing in the way of social progress. A caption in the paper over the photos of Justices Brett Kavanaugh, Amy Coney Barrett, and Neil Gorsuch declares that “the Trump Supreme Court Appointees tip the balance on the Court completely in favor of what is essentially a group of Republican operatives acting as a check on any and all progressive legislation or actions coming from the Executive and Legislative branches of government.”
​
Let’s hope and pray that the communists’ fears are realized.

This article may be cited as: Kincaid C. Biden’s Disorganized Dictatorship. HaciendaPublishing.com, January 15, 2022. Available from: https://haciendapublishing.com/bidens-disorganized-dictatorship-by-cliff-kincaid/.