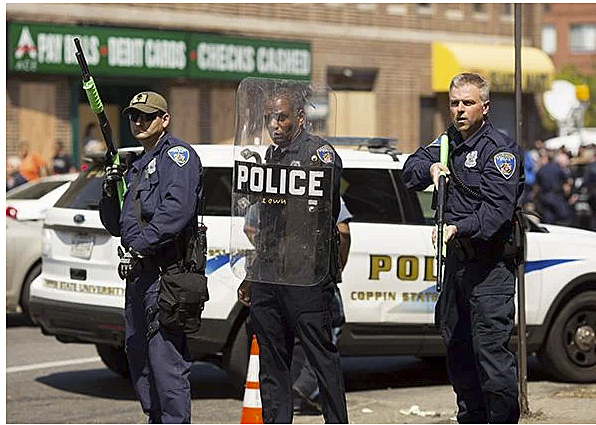 A Year Of Living Dangerously In American Cities by Jeff Crouere

In today’s urban America, if you are a thief, why wouldn’t you smash a glass door or glass display case and grab all the merchandise you could? Seriously, why wouldn’t you? In the old days you wouldn’t because you would be scared that you would get caught.

In the past, “smash and grab” robberies occurred, but it was a very infrequent occurrence. It was rare because thieves understood if they were caught there would be consequences, and even punishment, perish the thought! A criminal would have to raise bail to be released. If not, he would have to spend weeks or even months in the slammer.

Afterwards, there would be a trial or a plea deal, and a criminal might have to go to prison for more months, if not years. Thus, the prospect of incarceration was a serious deterrent, which forced criminals to exhibit some limited self-control.

This is no longer the situation in urban America, everything has changed. At first the change was gradual, with incarceration and punishment being viewed by certain “intellectuals” as a racist tool used to control urban minorities.

Thereafter, liberal politicians started parroting the same line. These political leaders claimed communities needed to focus on the “root causes” of thievery and stop punishing people who stole from others.

It was already trending in the wrong direction, but a sea change occurred in 2015. After the Freddie Gray incident sparked the widespread riots in Baltimore, the Mayor made an incredible statement. She openly declared that the criminals, who were looting and burning her city, had to be given “space to destroy.” Thus, businesses and neighborhoods in Baltimore were sacrificed because the rioters were angry.

It was the first time in the modern era that a major political figure openly declared she would rather surrender to the mob than fight lawlessness. It was obviously a very foolish decision, and it revealed true moral weakness.

She was no “Iron Lady” like British Prime Minister Margaret Thatcher. She exhibited none of the qualities of former U.S. Ambassador to the United Nations Jeane Kirkpatrick, who during the Reagan administration, stood up for human rights and challenged brutal communist dictatorships.

Baltimore Mayor Stephanie Rawlings-Blake, a liberal Democrat, was not even a good, elected official with a modicum of political skill. Sadly, she was a true moral weakling, who caved under pressure, and turned her city over to criminals while neglecting to safeguard the interests of her citizens.

This type of despicable political behavior was emulated in the years to follow. Mayor Rawlings-Blake became an unfortunate trendsetter. She set the example, which was followed by Democratic Party mayors all over the country.

We saw the results in the summer of 2020 as over 2,000 police officers were injured in the 574 violent riots which occurred in cities like Seattle and Portland. The riots of 2020 led to the record setting murder rates of 2021. At least sixteen cities set murder records in 2021. All these dangerous cities, except one with non-partisan leadership, is saddled with Democrat Mayors, who failed miserably in their main duty, to provide safe environments for their citizens.

Other cities with Democrat Mayors experienced massive increases in murder in 2021. In Chicago, there were 3,561 shooting incidents and 797 murders, the most since 1996. In New Orleans, there were 218 murders in 2021, the highest total since before Hurricane Katrina in 2005, when almost 100,00 more people lived in the city.

In urban America today, there exists an entire class of mayors and council members who believe they can control thieves, muggers, rapists, and murderers by surrendering to them. Truth be told, some of these politicians are only concerned about their careers and couldn’t care less about the real victims of these crimes and the productive, tax paying residents who are forced to live in these violent hellholes.

Regardless of their meaningless rhetoric, they are obviously not alarmed as their cities crumble and their policies make it impossible for law-abiding residents to live in peace.

Of course, they do care about their salaries and benefits and collecting lucrative pensions when they retire from politics and enter their next careers as well-paid lobbyists. They expect there will always be enough tax money to pay for their political rewards, even if the federal government must print money 24-7.

Well, it is time for a wake-up call for these selfish and idiotic politicians. No, there will not always be enough money to pay for their salaries, benefits, and pensions. In fact, nice, juicy lobbying gigs may not be waiting for them when they leave politics and enter the realm of influence peddling.

As their stupidity and weakness continues to damage our economy and create dangerous, unlivable urban areas, an increasing number of productive citizens will leave our major cities. The tax base of urban areas will continue to plummet and even the federal printing presses will not be able to save the day.

The United States may soon resemble 1920’s Germany where even a wheel barrel full of paper money was not enough to buy a loaf of bread. Our economy could also mimic what happened in the once prosperous country of Venezuela that became an economic nightmare due to disastrous socialist policies. Hello Democrat Mayors, this may be the future of America as well.

When will productive and law-abiding citizens of major American cities throw these selfish politicians out of office? Unfortunately, not soon enough. Those concerned citizens are too few in today’s urban areas. The hardworking citizens remaining will soon realize that it is better to flee our legacy cities than fight losing battles against corrupt city governments.

The United States of America is living through such a demographic trend today. People are fleeing cities and states led by left-wing Democrats and moving to areas controlled by pro-business and tough-on crime Republicans.

Since Democratic Party leaders refuse to modify their failed policies, these trends will continue indefinitely.