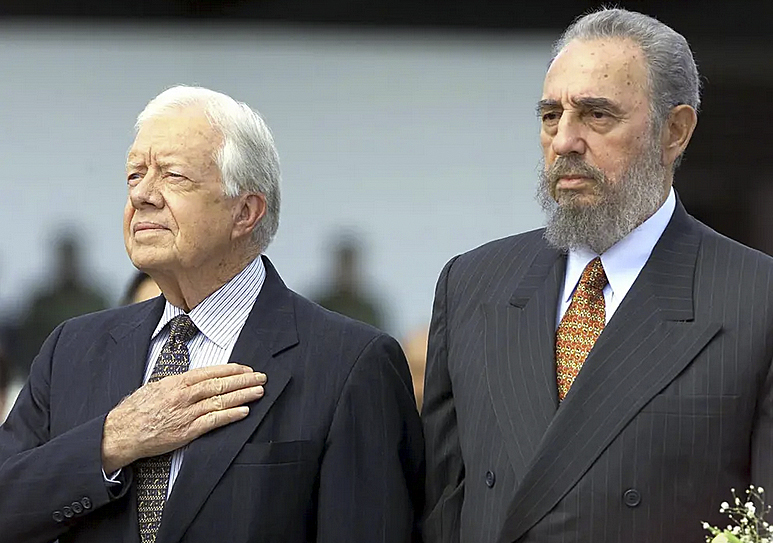 Former U.S. president Jimmy Carter’s recent visit to communist Cuba has renewed the calls for normalization of relations with the workers’ paradise from many quarters ­ from statist politicians who have admired Fidel Castro for decades to exporting firms like Archer Daniels Midland, which salivates at the prospect of taking its agribusiness to Cuba ­ all of them placing potential profits above freedom.

Much of the discussion from that crowd has centered on lifting the U.S. embargo against the communist island, while forgetting that Castro is a Stalinist dictator, who has devastated and desolated a once beautiful and prosperous island.

Under Fidel Castro’s dictatorship, trading with Cuba’s totalitarian, communist system is like prospecting for fool’s gold. Sure, under the communist system Cuba’s labor is cheap, basically slave labor, but this is not the American way.

Is it right for foreign companies to pay Fidel Castro $800-$1,000 per month per worker in the tourism industry, and then for the fascist tyrant to turn around and pay the Cuban worker only $10-$20 per month and keep the rest for himself? Isn’t this really a form of indentured servitude ­ or worse, slavery?

Supranational firms based in the U.S. and headed by Americans should remember Alexis de Tocqueville’s admonition that “America is great because America is good, and if America ever ceases to be good, America will cease to be great.”

But are there really any profits to be made in Cuba under the present system? Or is it “fool’s gold” that is being prospected?

Cuba has defaulted payment on all of its international loans and the communist nation is bankrupt. Yet as far back as 1997, Forbes magazine discovered that Fidel has amassed a fortune of $1.4 billion. Castro owes the Paris Club of European bankers $12 billion; Spain, $9 billion; and another $10 billion is owed to Argentina, Great Britain, Japan, Canada and other nations foolish enough to place their citizens’ monies in the iron grip of the tyrant. Ditto for Mexico, Venezuela and Russia and other friends of Castro ­ Cuba has not paid them either for oil and other commodities received over the years.

If you travel to Cuba, you will see every item and luxury commodity available in the diplotiendas (dollar stores) for foreign tourists. How did these items get there? Because Castro is able to trade and has been trading with anyone he wants to in the world, except for the U.S. And yes, the U.S. embargo is porous.

Last year Congress eased the embargo, and the U.S. now allows American firms to send food and medicine to Cuba. The communist dictatorship, which has been turning more and more fascist in recent years to survive, has, in fact, already received shipments of food from the U.S.

All that is left standing of any substance, as far as the U.S. embargo is concerned, is that Congress wisely has not allowed U.S. taxpayers to finance the loans that would be made to the dictator. Were we to completely lift the embargo, U.S. taxpayers will be subsidizing the necessary loans made to the communist nation.

When the dictator defaults, as he has done on all other loans, then American taxpayers will be left holding the bag, paying Castro’s debts, just like the Spaniards, the Argentineans, the British, and every other nation whose leaders were foolish enough to lend money to the communist tyrant.

As far as an investment risk, Cuba is 183rd on a list of 187 places (just above Somalia) in a European investment survey for investment opportunity.

And Cuba correctly remains listed by the U.S. State Department as one of seven states that sponsor terrorism, along with Syria, Iran, Iraq, Libya, Sudan and North Korea. Cuba and those other rogue nations are among 17 countries that the U.S. asserts have the potential for making chemical and biological weapons and possess the ability to launch a biological war and bioterrorism against the U.S., according to another government agency.

The U.S. embargo has not been a failure. Not only has it been a moral statement, but it has also been a tool, the only tool America has had, or that it has been willing to use consistently against Castro. The U.S. embargo has forced the dictator time and again to divert funds away from his repressive policies at home and from subversive activities in Latin America.

Because Castro has been cash strapped since the collapse of the USSR, he has been unable to wreak the havoc he would like to. Yes, the embargo has limited the damage that the dictator has done to the Cuban people at home and to U.S. interests abroad – and to freedom everywhere.

The embargo, for example, has forced Castro to legalize the dollar, allow Cubans to use their old jalopies as private taxicabs, allow small family restaurants to open, and permit campesinos to sell small amounts of their surplus produce. Even some diplotiendas are now allowing ordinary Cubans with dollars to purchase goods in their stores.

What lifting of the embargo will do is:

1. Saddle the U.S. taxpayers with more debt that will soon follow the defaulted loans made to the Cuban dictator;

2. Permit the dictator to resume his repressive tactics in Cuba and his subversion elsewhere in Latin America totally unimpeded; and

3. Allow the entrenched communists, including Raúl Castro, to remain in power once the Maximum Leader dies of old age or excesses.

Fidel Castro, the evil genius, has been able to weather every political and economic storm that has befallen him for 43 years, but his underlings possess neither the popularity, cunning or intellect to survive and continue the oppression of the Cuban people ­ without American assistance.

When should the U.S. end the embargo and restore normal relations with Cuba? It would be appropriate to do so when the Castro brothers step down and permit free and fair elections to take place, restoring constitutional governance in the Caribbean island; allow free speech and a free press; restore individual liberty, freedom of worship, and private property rights; and free all political prisoners.

Miguel A. Faria Jr., M.D., is Editor-in-Chief of the Medical Sentinel of the Association of American Physicians and Surgeons (AAPS) and author of “Cuba in Revolution ­ Escape From a Lost Paradise” (2002; HaciendaPublishing.com).

This article may be cited as: Faria MA. Prospecting for Fool’s Gold in Cuba — Again. NewsMax.com, May 16, 2002. Available from: https://haciendapublishing.com/prospecting-for-fools-gold-in-cuba–again/.