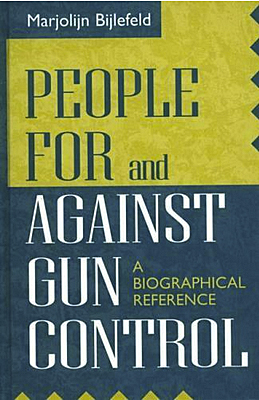 People For and Against Gun Control: A Biographical Reference by Marjolijn Bijlefeld

This biographical reference book on “the key figures in the gun control debate today” delivers arguments and counterarguments on the meaning of the Second Amendment to the U.S. Constitution, Americans’ right to keep and bear arms. This book puts human faces on the argumentation. The figures featured in the reference book came from different backgrounds and disciplines, law, medicine, academics, law enforcement and plain mothers, fathers, brothers, sisters, etc. who have become, because of their own experience, activists in the great debate.

Ms. Bijlefeld has dealt adeptly and in a neutral manner with this debate, a debate on which the contestants often argue hotly and emotionally. She should be applauded for her efforts, for this book belongs in the hands of all of those involved in the debate, as well as politicians, teachers, journalists, and in all of the public libraries, as an invaluable source of reference. Some of the personalities featured in this book on the pro-gun side, Neal Knox, Gary Kleck, David Kopel, Don B. Kates, Sheriff Jay Printz, Suzanna Gratia Hupp, etc, contrast greatly, as can be imagined with those on the gun control camp headed by James and Sarah Brady, Carolyn McCarthy, Garen Wintemute, Phillip J. Cook, etc.

The volume contains fifty stories, biographical sketches of these figures. The tome is well and concisely written, and for those of you not previously introduced to this debate, I suspect, the author is correct that the reader will experience a range of emotions and many “will change their minds several times over” before coming to an informed conclusion. The well researched indices contain a summary of federal and state firearm laws (e.g., what bans are in effect in certain states, which states require registration, etc.), and various other compilations and sources of reference.

As one of the participants in the debate, I can categorically state she was fair, as fair as one can be, in her difficult task of writing this sort of book. One point that should be made is that in the months since the publication of this book, public opinion has decisively swung toward less gun control and more crime control. This was reflected in the polls taken during the presidential campaign and, the relatively mild tone of Vice President Al Gore, who wanted more gun control laws, versus Texas Governor George W. Bush, who wanted to enforce existing laws and not implementation of further restrictions on the right to keep and bear arms by ordinary Americans. Sensing this, Al Gore wisely and uncharacteristically remained quiet on this issue in the final days of the Presidential Election, but the damage was done. Given the economic prosperity, peace, and stability, he should have won the election. The fear of many Americans of losing their gun rights may have contributed to his defeat.

Ms. Bijlefeld’s magnum opus should be a good starting point for those readers not yet initiated in the gun debate as well as those of us who have been baptized in the fire of this controversy and desire to know more about our intellectual adversaries.