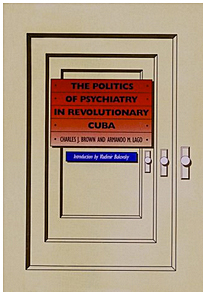 The Politics of Psychiatry in Revolutionary Cuba by Charles J. Brown and Armando M. Lago

This slim tome can be read in one or two settings — if one can stand the poignant drama and the horror stories recounted in the pages of this book.

The Politics of Psychiatry only came to my attention because its documentation value was mentioned in two special issues of The New American magazine chronicling the Elián González saga (March 13, 2000 and May 22, 2000), the story of six-year-old Cuban boy who has been a point of contention between the Cuban-American community in Miami who wants him to stay in American freedom, on the one hand, and the U.S. and the communist Cuban government, which want him returned to Cuba, on the other.

The Politics of Psychiatry graphically documents that the totalitarian government of Cuba has used (and continues to use) psychiatry for political purposes — in this case, political repression, the crushing of dissent, and establishing conformity within the political structure of the island prison which communist Cuba has become.

The authors have carefully investigated the cases and personal stories of 27 Cuban dissidents who were charged with political crimes (non-violent opposition to the regime in one form or another), arrested, interrogated by the State Security apparatus, and then treated horribly as psychiatric cases. In Cuba, psychiatrists must cooperate with the State Security apparatus or face reprisals, arrest, and punishment by the communist government; thus, there is no opposition to speak of.

Among the 27 cases cited in this book, a clear pattern emerged. After arrest, they were usually taken to Villa Marista State Security Headquarters for harsh interrogation, then to the Havana Psychiatric Hospital (also known by its old name, Mazorra) where they underwent unspeakable terror. They were not taken to the meticulously polished floors and corridors of the Paredes ward, where foreign dignitaries are taken to be shown the marvelous advances in psychiatry in the Cuban health care system, but to the horrible Salas Carbó-Serviá and Castellanos wards which are under the control of State Security. Yes, psychiatric prisoners underwent unspeakable horror, but you must read this book. . .

Suffice to say Cuban psychiatry has been perverted by the communist government of Fidel Castro, and it has become totally subordinate to the state’s nefarious political purposes. In the past, the World Psychiatric Association (WPA) has refused to investigate these charges because “complaints are examined in association with the WPA Member Society in the country in question. As the WPA has no Member Society in Cuba, we cannot examine the complaint appropriately.” Perhaps it is time that the information in this book becomes widely available to the American public and a cry for justice will be made by an outraged public.