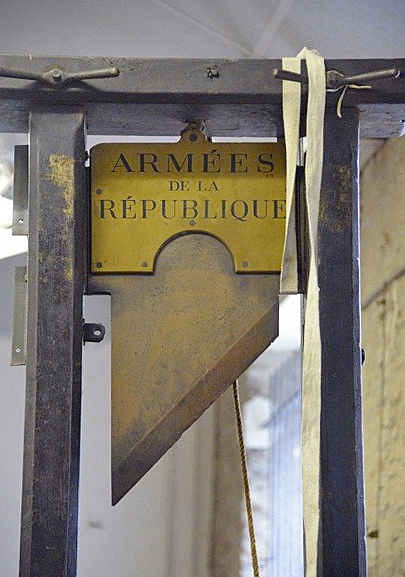 Paris in the Terror by Stanley Loomis

The reader could say that this compelling tome about the breathtaking events of the French Revolution during the Reign of Terror really comprises three books in one — three human conflict stories carefully webbed into the sinister tapestry of the French Revolution, particularly during the Reign of Terror (June 1793 to July 1794).

This sanguinary period takes us through the assassination of Jean Paul Marat, the rapid rise and fall of the Girondins, the use in full of the killing power of the guillotine by the dictates of the Revolutionary Tribunals and, ultimately, the ascendancy of the most radical Jacobins and Maximilien Robespierre, the Incorruptible.

The first part of this tome explains the events in Charlotte Corday’s life, her innermost thoughts and reflections, her courage and the patriotic sentiments that consumed her and gave her strength to plan and carry out the assassination of the radical, blood-thirsty Marat, right in the belly of the beast at his residence at 30 Rue des Cordeliers on July 13, 1793! Marat had already expulsed the brave Girondin leaders from the National Convention (June 2), and he was now finalizing his plans for their arrest and grisly trip to the guillotine at the Place de la Révolution. His direct participation in the bloody conspiracy was cut short by Corday. However, his demise only served to fuel the fire of the gathering conflagration.

The second part deals with the conflict between the Girondins led by Madame Roland and Georges Danton, followed by the struggle for power between Danton and Robespierre. The Girondins, divided, remained oblivious to the mortal threat of Robespierre; they were young patriots and idealists, not conniving politicians or statesmen. As a party, they failed to recognize the need, or rather the necessity, for them to forge an alliance with Danton, not just to win politically against the treacherous Robespierre, but for their very own survival.

The third part deals with the complete takeover by Robespierre, St. Just (also Saint Just) and Couthon of the Committee of Public Safety and the Revolutionary Tribunals of state prosecutor, Fouquier-Tinville. By then, the Convention had been wheedled or extorted to give up much of its power.

By the spring of 1794, the valiant Girondins, Danton, and his friends Camille and Lucile Desmoulins, and even the sanguinary Hébert — had all been guillotined. The right side of the Convention stood empty; the center, “the Plain,” remained silent, cowed and stupefied; even the radical Jacobins on the left, the Montagnards, feared for their lives. The far ends of the political spectrum, like an excessively bent horseshoe, representing the extremes of anarchy (on extreme right) and tyranny (on extreme left), became separated by a narrow gap, that of anarcho-tyranny that agent provocateurs, immorality, and chaos had bridged with the establishment of Robespierre’s stern dictatorship.

As the Deputies trembled in fear, and Paris becomes deserted and terrorized, one man relatively unknown in history senses his own life is in danger. He exhorts and finally convinces his fellow deputies they must act together decisively and swiftly, if they are to save their lives and end the Terror.

They did so on 9 Thermidor (July 27). The rallying figure is relatively obscure in history, although the details of his life are well known. He conspired and bred intrigue in the shadows. To find out the engrossing details of the denouement of this dramatic final clash prompted by a few desperate men, you must read this riveting book. Once you begin reading it, you will have difficulty putting it down.

For those interested in the Reign of Terror during the French Revolution, check online for this spellbinding book!

Miguel A. Faria, Jr., M.D., is an Associate Editor-in-Chief and a World Affairs Editor of Surgical Neurology International (SNI); Clinical Professor of Surgery (Neurosurgery, ret.) and Adjunct Professor of Medical History (ret.) Mercer University School of Medicine. He served under President George W. Bush as member of the Injury Research Grant Review Committee of the Centers for Disease Control and Prevention (CDC; 2002-05); Realclearhistory Author (2012-present); Founder & Editor-in-Chief of the Medical Sentinel (1996-2002); Editor Emeritus; Author, Vandals at the Gates of Medicine (1995), Medical Warrior: Fighting Corporate Socialized Medicine (1997), and Cuba in Revolution: Escape From a Lost Paradise (2002). His website is https://HaciendaPublishing.com.

This article may be cited as: Faria MA. Review of Paris in the Terror by Stanley Loomis. Hacienda Publishing Inc. December 10, 2000. Available from: https://haciendapublishing.com/paris-in-the-terror-by-stanley-loomis.