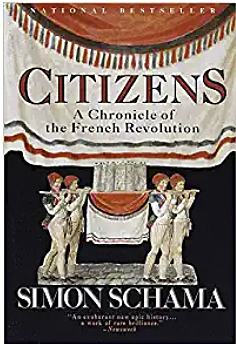 Citizens: A Chronicle of the French Revolution by Simon Schama

This book, in compelling narrative, makes is clear that the French Revolution actually began not with the clamor of the common people but with the blue-blooded aristocracy and the high clergy of the ancien régime who had been enamored with the writings of Jean-Jacques Rousseau and the views of the enlightenment (i.e., convincingly demonstrated in the Assembly of Notables convened in February 1787). Moreover, the revolution spilling into the streets of France began not in Paris but in the streets of Grenoble, the actual cradle of the revolution, with the Day of Tiles (June 10, 1788), and from there eventually spreading to the countryside with the grain riots and finally in March through April of 1789 in the concerted defiance of the hated game laws protecting birds and animals. The mobs learned to command the streets after the Réveillon Riots (April 1789) so that by July 14, 1789, they had had ample practice for the storming of the Bastille.

One gets to know with almost casual familiarity the important personages in the ancien régime, including those working behind the scene. (This has been heretofore usually the case only with the most bloodthirsty revolutionaries like Marat and Robespierre.) Regardless of what you have been led to believe, the earliest revolutionaries were not bourgeoisie, but nobility and high clergy, many of them functionaries in the old regime. Intoxicated by idealism and Rousseau’s sublime concepts of virtue, reason, equality, etc., they had set out to correct real or perceived iniquities in France. Louis XVI’s ministers saw the dangers lurking ahead, but seemed impotent to effectively protect the monarchy and solve the problems afflicting France, particularly the looming, serious financial problems and the threat of national bankruptcy. Nevertheless, these old regime functionaries, for the first time, are seen by the author as people of flesh and blood, although with all the frailties of ordinary men when all too often in times of crises — unlike other books in which they are portrayed almost anonymously as faceless aristocrats imbued not in human virtue, but only suffused of arrogance and other vices of idle and luxuriant living.

This book argues persuasively that the old regime was of itself undergoing changes of modernity in trade, technology, and laissez faire capitalism influenced by the teachings of the physiocrats, and these changes, rather than being openly welcomed by the people because of the advent of greater economic freedom, were actually decried and resented because these changes brought them insecurity and incertitude. The common people wanted cheap bread and regimentation whereas the lesser nobility wanted to hold onto the only thing left to them — their titles of nobility and what remained of their ancient land privileges, poor as most of them had become. It wasn’t the lesser nobility or the bourgeoisie who led in the revolution.

From the outset of the revolution, for the most part, the liberal elite coming from the upper crust of the high nobility and clergy pushed for progressive change from above (operating in the voice of Mirabeau, Siéyès, Tallyrand, etc.) leading, whereas the poor and displaced persons militated from below. The destructive winter of 1788-1789 had forced the destitute and other disaffected elements of society to tread in the path of the revolution. The bitter harvest of 1787, the scarcities that followed, and the concomitant high prices for grain, bread, and other commodities did not help the looming economic and financial crisis. Mr. Schama certainly provides good evidence and persuasive arguments that those men of the nobility and clergy who were making war against their own classes set the revolution in motion — a tumbling, violent cascade that later they were unable to control.

One must visualize the French Revolution from its inception in 1789 to the end of the Terror on 9 Thermidor as a speeding log moving from left to right representing first the alleged enemies of the people, the aristocrats, the refractory priests, then the constitutional monarchists and foreigners, then the Feuillants, Girondins, Dantonists (and the Cordeliers), Hébertists, even more moderate or inconvenient Jacobins, and finally the Robespierrists — devoured by their own revolution. This log is ever being mounted by fresh radicals on the left while it continuously moves and is turned into lumber on the right by the circular saw of the revolution. (Only the Hébertists were out of sequence in the political spectrum only because the dictatorship of Robespierre outflanked them in the struggle for power.)

In the end, if the aristocratic leaders didn’t escape as émigrés from the flames of the revolution they had created — almost uniformly, they, like reluctant ordinary Frenchmen, paid the ultimate price in the guillotine.

Miguel A. Faria, Jr., M.D., Editor-in-Chief of the Medical Sentinel of the Association of American Physicians and Surgeons (AAPS) and author of Vandals at the Gates of Medicine (1995) and Medical Warrior: Fighting Corporate Socialized Medicine (1997).

This book review was originally published on Amazon.com on December 5, 2000.