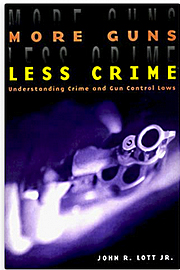 In this most momentous book, John R. Lott, Jr., studied the FBI’s massive yearly crime statistics for all 3,054 U.S. counties over 18 years (1977-1994), the largest national survey on gun ownership and state police documentation in illegal gun use, and comes to some startling conclusions:

1. While neither state waiting periods nor the federal Brady Law is associated with a reduction in crime rates, adopting concealed carry gun laws cut death rates from public, multiple shootings (e.g., as those which took place in Jonesboro, Arkansas, and Springfield, Oregon, this year, or the 1993 shooting on the Long Island Railroad) – by 69 percent.

2. For each additional year that concealed carry gun laws have been in effect, the murder rate declines by 3 percent, robberies by over 2 percent, and rape by 1 percent.

This book debunks much of the sensationalized mythology surrounding what has been published in the medical literature based on the politicized, results-oriented gun (control) research of the public health model, and supports and elaborates on Profs. Don B. Kates’ and Gary Kleck’s previous research about the benefits of gun ownership by ordinary citizens, albeit from different perspectives.

This is a must have tome for those genuinely interested in the criminological aspects of gun and violence research. Dr. Lott deserves the respect of all social scientists working in this area for his groundbreaking research and the accolades of all freedom-loving citizens of this great nation.

(This book review was originally published on Amazon.com on May 1, 2000.)