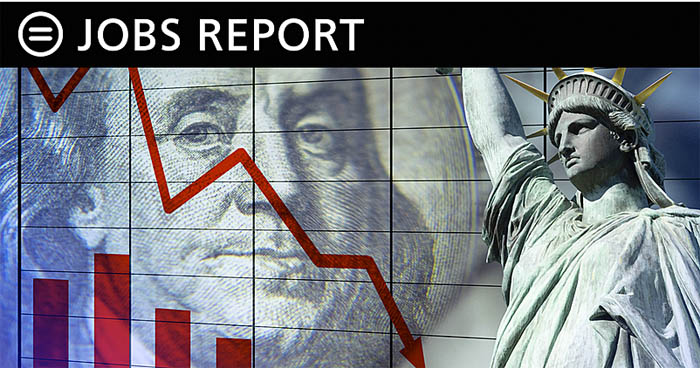 During the Trump administration, the liberal media always tried to discount any positive news and spin events in the worst way for the President. They hated Trump and attempted to destroy him.

These liberal media “watchdogs” have become today’s “lapdogs.” Instead of reporting factually, the liberal media strive to find “positive” news to boost the sagging poll numbers for President Joe Biden and the Democrats.

The latest example of this cheerleading occurred with the release of the July jobs report by the Bureau of Labor Statistics. It showed an increase of 528,000 jobs from June, while the unemployment rate dropped to 3.5%, matching the nation’s lowest level in the past fifty years.

This report was better than the expectations that the economy would add 250,000 new jobs in July. Soon after the announcement was made, President Joe Biden boasted that the report was a positive economic sign. He said, “Today’s jobs report shows that the economy added 528,000 jobs in July. More people are working than at any point in American history. That is no accident, it’s results.”

Vice President Kamala Harris noted that the “unemployment rate matches the lowest it’s been in more than 50 years. More people are working than ever before.”

The biggest problem is that inflation is raging at 9.1%, which is the highest level in 41 years. Simultaneously, the country is mired in a recession, as defined by two quarters in a row of negative Gross Domestic Product growth. In addition, there are still supply chain problems and shortages remain of key items such as baby formula and feminine hygiene products.

Most importantly, there is a lack of consumer demand because real weekly earnings have fallen 5.6% since the end of 2020. In the view of Brownstone Institute President Jeffrey A. Tucker, these numbers are extremely troubling. He said, “We are living through the longest consecutive month-by-month decline in real personal disposable income since 1959, and it is combined with a most recent 16% increase debt service as a percent of that same income stream. Translation: dramatic moves toward personal impoverishment.”

As a result of increasing “personal impoverishment,” more Americans are unable to pay for their basic needs and are forced to access community food banks to prevent starvation This has resulted in critical shortages at food banks all over the country.

Because of a vast array of economic problems, 56% of Americans are delaying making large purchases, while 61% are worried about their savings. It is also not surprising that the savings rate has fallen to only 5.4%, much lower than pre-pandemic levels.

With higher prices and a decline in real wages, consumer confidence in the economy is declining rapidly. After posting the lowest rating in a decade in June, the consumer confidence index fell again in July to 95.7%. According to Lynn Franco, Senior Director of Economic Indicators at the Conference Board, “Concerns about inflation – rising gas and food prices, in particular – continued to weigh on consumers.”

There are good reasons for the American people to continue to worry. Gasoline and grocery prices are still significantly higher than last year. With high inflation and an ongoing recession, the Federal Reserve has raised interest rates significantly for two consecutive months.

As expected, these moves have led to negative consequences for many aspects of the economy. For example, interest rates are rising rapidly on the credit card debt for Americans. As more people are facing a decline in real wages, the amount charged on their credit cards is increasing dramatically.

Higher interest rates are also harming the housing industry. In June, new home sales dropped a staggering 17.4% from last year. As interest rates are expected to continue to climb in the months ahead, there is no relief in sight for this vital industry.

All these signs show an economy in trouble, not one that is expanding with robust job growth. Thus, the so-called record job numbers and low unemployment rate being touted by the Democrats and the media are truly a mirage.

Upon closer examination, the July labor report shows plenty of troubling statistics. Fox News host Charles Payne noted that in July there were 68,000 fewer Black Americans employed.  He also discovered that there were 71,000 fewer full-time jobs, while part-time employment exploded by 384,000. This economy is so awful that the number of people forced to work two full-time jobs increased by 92,000 in July to a staggering level of 433,000 Americans.

Other compelling statistics indicate the true economic problems the country is confronting. In July, the number of self-employed Americans dropped by 279,000, while the number of Americans not in the workforce altogether increased to a staggering level of 100,051,000 in July, an increase of 239,000 from June.

These are individuals who may be retired, receiving an education, serving as a family caregiver, or choosing not to work or seek employment. With so many Americans not in the workforce, the labor force participation rate dropped in July to 62.1%.

With over one hundred million Americans not participating in the workforce, it is no surprise that the gross domestic product has been declining. Not only are more Americans surviving by accessing the funds in their retirement accounts, but more Americans are depending on financial assistance from a myriad of federal government programs.

Prior to the start of the pandemic, the labor force participation rate was 63.4%. This shows that the media reports that the labor force has returned to pre-pandemic levels are patently false. In fact, there are 623,000 fewer people in the workforce today than in February of 2020, right before the pandemic began.

A detailed examination of the jobs report shows no reason to celebrate, only more reason to worry about our nation’s economic health.