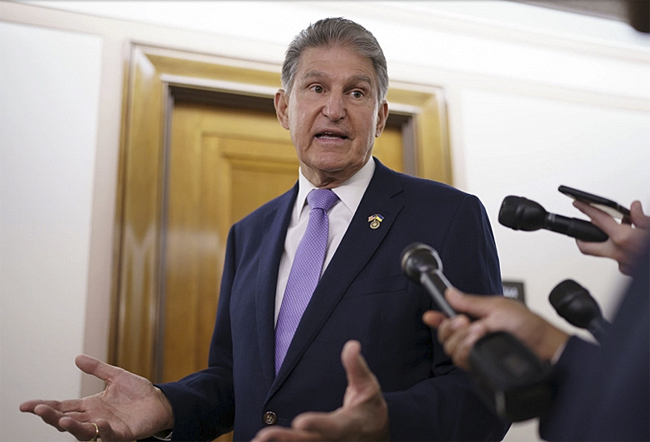 In announcing a deal with far-left Senate Majority Leader Chuck Schumer (D-NY), U.S. Senator Joe Manchin (D-WV), exposed his true ideology once again. Manchin, who balked at supporting the $3 trillion “Build Back Better” legislation, reached an agreement with Schumer after months of negotiations.

The $433 billion legislation is erroneously being labeled the “Inflation Reduction Act.” According to Manchin, the bill does not raise taxes and will reduce our 9.1% inflation rate.

Unfortunately for Manchin, an analysis from the University of Pennsylvania Wharton Budget Model reached a different conclusion. According to the report, “We estimate that the Inflation Reduction Act will produce a very small increase in inflation for the first few years, up to 0.05 percent…in 2024.”

The bill will also increase taxes in numerous ways. For example, $313 billion will be raised by establishing a 15% minimum corporate tax for businesses valued at $1 billion or more. A new army of Internal Revenue Service agents will be hired to bring in an additional $124 billion and the carried interest loophole will be closed, which will generate $14 billion in revenue for the federal government.

While groups such as Americans for Tax Reform argue that the bill raises taxes, Manchin claims it only closes “loopholes.” This phony narrative will allow Manchin to support this bill. However, most economists would agree that when more revenue flows into the federal government, taxes are increasing.

The impact of the legislation directly contradicts a promise Manchin made in an October 2010 televised debate. At that time, Manchin vowed “I don’t think during a time of recession you mess with any of the taxes or increase any taxes.”

This tax increase will occur while the country is now officially in a recession, despite the word games being played by members of the media and the Biden administration. It was announced last week that in the second quarter of 2022, the nation experienced a decline of the Gross Domestic Product (GDP).

It is never a suitable time to raise taxes, which are already too high, but the worst time to do it is during a recession. According to U.S. Senator Pat Toomey (R-PA), the corporate tax increases in the bill will “slow down” the economy and “hurt manufacturing and domestic investment.”

Toomey believes that in supporting such unwise legislation Manchin was “taken to the cleaners” by Schumer and Senate Democrats. He was promised an “energy infrastructure bill” at some point in the future, but Toomey is confident such legislation will never materialize. He asked, “why isn’t that in this bill? and the answer is because Democrats don’t support it.”

The sad reality is that Senator Manchin knows that an “energy infrastructure” bill will never emerge. He needed a reason to give to the conservative voters in his state why he was supporting a reckless bill that increases the size of the federal government and raises taxes when the nation is suffering from both high inflation and a recession.

Manchin is a typical liberal Democrat who does not keep his word to his constituents and is an unreliable ally for conservative Republicans. In the horrific 18+ months of the Biden administration, Republicans have been counting on Manchin to stop the excesses of this radical agenda and preserve fiscal sanity.

The record shows that Manchin has regularly disappointed Republicans and supported President Joe Biden whenever his vote was needed. He endorsed the super liberal Supreme Court nominee Ketanji Brown Jackson. Manchin voted for the $1.2 trillion infrastructure bill and supported the recent bi-partisan gun control legislation, passed in the aftermath of the school shooting in Uvalde, Texas.

Most significantly, Manchin supported President Joe Biden’s $1.9 trillion “American Rescue Plan,” which is a major reason the country is suffering with 9.1% inflation. Initially, Manchin claimed that he voted for the bill because he was convinced it would not lead to inflation. After seeing inflation skyrocket from 1.4% at the end of the Trump administration to its current level, Manchin is finally admitting his mistake.

In an interview on Fox News, Manchin vowed that in endorsing the new legislation “I’ll make sure I don’t make that mistake again.” Yet, as outlined in the Penn-Wharton Budget Model, his new legislation will  definitely lead to more inflation at a time when the people of West Virginia and the rest of the nation are reeling from the terrible effects of high prices of food, gasoline and other items families need for their survival.

Despite the wishes of conservatives, Manchin has a lifelong voting record which exposes his liberalism. According to the American Conservative Union, Manchin’s lifetime rating is 27.4%, a failing grade even using “Common Core Math.”

Manchin does not accurately represent the conservative people of West Virginia. In the 2020 election, West Virginia voters awarded 68.62% of their votes to President Donald Trump. It was his second highest percentage vote total in the country, behind only Wyoming. Yet, while his voters supported Trump, Manchin joined fellow Democrats in strongly endorsing Joe Biden in 2020.

Since that time, despite his image as a “conservative Democrat,” Manchin has been a key ally for Biden and Senate Democrats for many important votes. It is time that Republicans stopped romanticizing that Manchin is their friend. His endorsement of this $433 billion “Inflation Reduction Act” should put an end to that fantasy for the last time.

In 2024, when Manchin must face the voters for re-election, the people of West Virginia need to support a Senator that is more in line with their conservative values. Republicans need to make his defeat one of their top priorities in 2024.