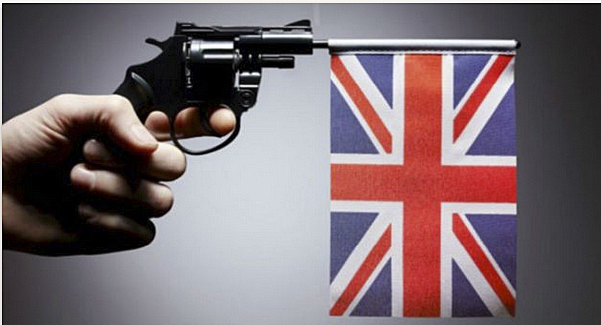 Great Britain and Gun Control: With Neither Liberty nor Safety

Since 1996, when a madman went on a rampage killing 16 children and their teacher in Dunblane, Scotland, Great Britain has tightened to strangulation its already draconian gun control laws so that only certified members of approved target-shooting clubs are allowed to own guns. These must be .22 caliber or smaller and must be kept locked up at the club at all times.

Dramatic Increase in Robberies and Other Crime

To make matters worse for England ­ and this is also true for Canada ­ in those countries where citizens are disarmed in their own homes, day burglary is commonplace and dangerous because criminals know they will not be shot at if caught flagrante delicto. Not so in the U.S., where burglars not only prefer night burglaries but try to make sure homeowners are not in to avoid being shot at by the intended victim.

The rising tide of thievery and burglaries in England has dubbed Britain “a nation of thieves,” wrote the London Sunday Times, which noted: “More than one in three British men has a criminal record by the age of 40. While America has cut its crime rate dramatically Britain remains the crime capital of the West. Where have we gone wrong?”(2) Perhaps England should look introspectively.

The most drastic ascendancy of crimes in Britain was found in those types of felonies where recent studies in the U.S. have shown that guns in the hands of law-abiding citizens not only save lives but also protect private property, reduce injuries to good people, and crime is generally deterred.(3)

Writing in the May/June 2000 issue of the Medical Sentinel of the Association of American Physicians and Surgeons (AAPS), Dr. Michael S. Brown writes that while the British laws have disarmed law-abiding citizens, “a black market has flourished, as usual with prohibitions, to supply criminal elements. Up to 3 million illegal guns are in circulation in Britain, leading to a rise in drive-by shootings and gangland-style executions.”

Dr. Brown continues, “Young criminals (ages 15 to 25 with prior convictions), according to the Sunday Times, ‘own or have access to guns ranging from Beretta submachine guns to Luger pistols, which can be bought from underworld dealers for as little as £200 ($320 U.S.).'”(4) In the U.S., ordinary citizens shoot three times as many criminals in self-defense as do the police.

Recent work by professor John R. Lott Jr. at the University of Chicago has shown that allowing people to carry concealed weapons deters violent crime – without any apparent increase in accidental death or suicide. While neither state waiting periods nor the federal Brady Law is associated with a reduction in crime rates, adopting concealed-carry gun laws cuts death rates from public, multiple shootings like those in Littleton, Colo., this year or Dunblane, Scotland in 1996.

Professor Lott found that when concealed-carry laws went into effect in a given county, murders fell by 8 percent, rapes by 5 percent and aggravated assaults by 7 percent. For each additional year concealed-carry gun laws have been in effect, the murder rate declines by 3 percent, robberies by more than 2 percent and rape by 1 percent.(5)

Moreover, studies in the U.S. have shown that guns are the great equalizer for females when accosted in the streets or assaulted in their homes.

When a woman is armed with a gun, up to 83 percent of the time she will be successful at preventing rape, and only half as likely of being injured in the process.(3) These figures should be good news in the U.S. for the 17 million American women estimated to carry guns, but not for those in Great Britain who have been proscribed from keeping guns for self-protection.

While the number of rapes in the U.S. is still higher than in Great Britain, it is falling, whereas the rate of sex crimes and violent assaults in England and Wales is increasing rapidly because of their permissive criminal justice system and even greater tendency than the U.S. to rehabilitate rather than punish criminals — and, of course, the stringent policy of citizen disarmament.

This pusillanimous policy advertises to sex criminals that they have nothing to fear not only from their criminal justice system but also from their intended victims.

Will the British require another American Revolution to come to their moral senses? Or, instead, will we Americans reject our Second Amendment, the palladium of our liberties and our legacy of freedom?

Miguel A. Faria Jr., M.D. is the editor-in-chief of the Medical Sentinel, the official journal of the Association of American Physicians and Surgeons (AAPS) and author of Vandals at the Gates of Medicine: Historic Perspectives on the Battle Over Health Care Reform (1995) and Medical Warrior: Fighting Corporate Socialized Medicine (Macon, Ga., Hacienda Publishing Inc., 1997), https://HaciendaPublishing.com.

This article may be cited as: Faria MA. Great Britain and Gun Control: With Neither Liberty nor Safety. NewsMax.com, July 11, 2000. Available from: https://haciendapublishing.com/great-britain-and-gun-control-with-neither-liberty-nor-safety/.