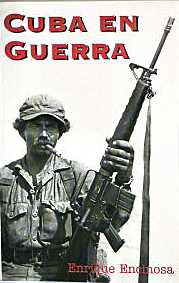 Cuba En Guerra (“Cuba In War”) by scholar Enrique Encinosa is the definitive work on the guerilla wars waged by anticommunist rebels against the repressive totalitarian regime of Fidel Castro from 1959-1993. Written in Spanish, it needs to be translated into English and other languages for wider dissemination. An English edition has come out and is recommended.

This book is not for the easily offended or faint-hearted. The poignant text, carefully annotated, meticulously research and succinctly put together by its author is accompanied by graphic photos of rebel leaders with machine guns and bandoleers, armaments, armed rebel battalions, and also pictures of those who died attempting to bring freedom to Cuba or captured and executed by the communist dictator.

Why would campesinos (peasants), workers, or students pick up arms and lead open revolts in the Escambray Mountains against Castro’s “worker’s paradise?” Why would Cuban exiles living good comfortable lives in Miami with their families leave to go back to Cuba, breach communist defenses to conduct clandestine operations, infiltration, and uprisings against Fidel Castro’s communist government? You must read this book to find out.

This 428-page book has complete notes and references, bibliography and index and should be in the library of all freedom-loving people who truly want to know the truth about Cuba’s communist regime and the heroic effort of those who have tried to bring change by armed insurrection.

Miguel A. Faria, Jr., M.D. is the author of Cuba in Revolution: Escape from a Lost Paradise (2002) and numerous articles on Cuba, Castro, and communism.

This article may be cited as: Faria MA. Cuba En Guerra (“Cuba In War”) by Enrique Encinosa. HaciendaPublishing.com, August 7, 2000. Available from: https://haciendapublishing.com/cuba-en-guerra-cuba-in-war-by-enrique-encinosa/.