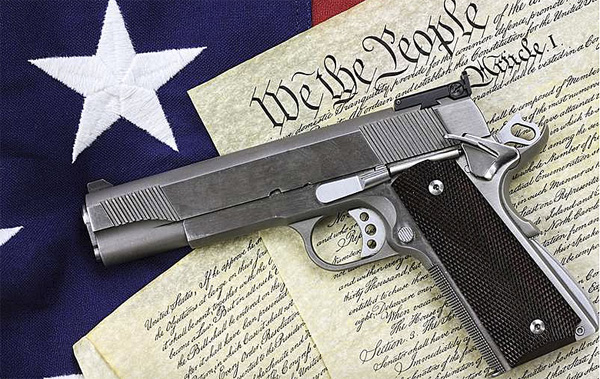 Firearms, gun control, and the role of the militia in modern society by Miguel A. Faria, MD

Showdown: The Looming Crisis Over Gun Control by Lenden A. Eakin (Mascot Books, 2014) is more than a book about the politics of gun control in the United States. It is a concise narrative not only about “the looming crisis over gun control” but also a clear and concise tome explaining the relevance of military firearms, “assault weapons,” the militia, and the Second Amendment in modern society. Eakin, a Virginia attorney and avid shooter with over thirty years experience in gun laws, an Army National Guard veteran and personal protection instructor, weaves the narrative effectively into eight succinct chapters.

The book is engaging because it is written based on well-conducted research and the perspective of Eakin’s experience in the National Guard, not to mention his expertise with firearms. Eakin is very familiar with early guns that were used or issued in the American military, from the matchlock and flintlock muskets of colonial times to the lever action rifles of the Western frontier (e.g., the Models 1886 and 1895). In the 20th century, he describes the development and use of the bolt action rifles, the Springfield 1903 and Enfield 1917 of World War I, and the Thompson Submachine Gun, the M-1 Garand, and the M-1 Carbine of World War II, as well as the modern M-16 service rifle (i.e., M-4 for the compact model and the AR-15 for the civilian semiautomatic version) of the present age. Most of these firearms from the late 19th and 20th centuries are still functional today and used in little known government sponsored training and competition programs. (p. 157-160)

Many military rifles, such as the 1918 Browing Automatic Rifle (BAR) and the FN/FAL, of which the civilian semiautomatic version is the R1-A1, use the standard .308 Winchester (7.62 NATO). Others use the .223 Remington (5.56 NATO) ammunition, such as the M-16, of which the civilian semiautomatic version is the AR-15. The .308 caliber offers longer range and greater penetration capabilities, as Eakin relates, but has significant recoil. The .223 caliber is lighter, easier to carry, and has less recoil. These two types of ammunition are also commonly available in the civilian market. (p. 151-152)

Eakin’s tome provides one of the clearest constitutional and legal definition and subsequent description of the evolution of the militia from its inception in the American tradition to modern times that citizens can find in any book. The militia has not disappeared into thin air or become irrelevant or obsolete, as asserted by gun control activists. Eakin makes it clear that while in modern times the “organized militia” has evolved into the National Guard — in which he served and indeed has been federalized by acts of Congress — the general militia is the body of the people capable of bearing arms, using the same type of firearms as those commonly used in the military. The general militia is still relevant and needed for individual self-defense and home protection as well as providing for the common defense, such as in the mass of the people aiding government forces in the case of large scale terrorism or homeland invasion, particularly when large portions of the U.S. Armed Forces and National Guard are engaged elsewhere; and in defending constitutional government and preventing the inception of tyranny at home.

Another interesting facet of the book actually relates to “the looming crisis over gun control” in 2013 and 2014, during the second term of the Obama administration. Eakin builds to a crescendo of suspense as he describes the concerted Democratic effort, strongly supported by President Obama, to pass Senator Dianne Feinstein’s ill-fated “Assault Weapons Ban of 2013.” They failed. Undeterred, the Democrats vowed to renew their effort and encouraged by President Obama hoped to make gains in Congress in the 2014 midterm election to resume the gun control push. The book leaves us in suspense as it was published in 2014. What subsequently happened was that Obama and the Democrats suffered a devastating and humiliating defeat. The Democrats lost 9 U.S. Senate members losing their majority, going from 53 to 44 seats, and losing 13 members in the House of Representatives going from 201 to 188 seats. The drubbing extended to governorships and the state legislatures. These loses may have helped paved the way for the presidential victory of Donald Trump in 2016, despite the predictions by pollsters and the cheerleading of the mainstream media for Hillary Clinton.

Most ironic to recent developments in the judiciary, in particular the contentious but successful appointment of Brett Kavanaugh as Associate Justice of the U.S. Supreme Court on October 6, 2018 by a close 50 to 48 vote, is the fact that it was Obama who apparently pressured Senator Harry Reid (D-NV) and the Senate Democrats in November 2013 to successfully push for the “nuclear option,” that is the use of a simple majority (51 rather than 60 votes) for confirmation of appointments to the U.S. Supreme Court. Obama reportedly wanted to make the federal judiciary more flexible to the executive branch in upholding gun control laws. (p.127-130)

I also found of interest the salient discussion pertaining to “fear of violence and active self-defense” in which Eakin described several scenarios beside the obvious fear of street crime, home invasions, mass shootings, and natural catastrophes. He described other national emergencies in which citizens may have to act individually or collectively to defend their homes and communities, end lawlessness, and restore order. These included the possibility of indirect nuclear war by third-world nations impacting the United States. He writes:

“Local devastation from nuclear war does not require an attack on America. ‘Research by Dr. Ira Helfand shows that limited use of nuclear weapons, such as a nuclear exchange between India and Pakistan, could cause widespread crop failure and worldwide famine.’ ” (p. 48) This devastation would result from radioactive dust clouds and fallout, despite the fact the nuclear explosion occurred elsewhere in the world.

Likewise, rogue nations, such as North Korea or in the near future Iran, could launch a destructive pre-emptive strike against the U.S. Eakin asserts, “A single nuclear detonation above North America would cause a catastrophic electromagnetic pulse (EMP) that would cause long-lasting electricity blackout.” An EMP could damage the electric grid and destroy the functioning of infrastructure in communication, finance, contaminating food and potable water, severely endangering America. Chaos could potentially result in lawlessness, looting, riots and violence, worse than what we have experienced during natural catastrophes. Citizens would be, at the very least, required to help government forces in restoring order and provide protection for their own families and communities. The same would be true for a major terrorist attack. (p. 49-51)

In short, if the reader is looking for an introductory tome to the topic of firearms and the politics of gun control, Showdown: The Looming Crisis Over Gun Control is a good choice. This book also provides clarification of certain heretofore murky topics, such as the historical development of military rifles in the U.S. Army, the meaning of militias, the role of the Army National Guard in the modern U.S. military, and the real reason why the Founding Fathers included militias and the right to keep and bear arms in the Second Amendment of the Bill of Rights. I highly recommend this book to gun enthusiasts as well as those genuinely interested in gun violence prevention while recognizing and respecting the right of others to armed defense in protecting themselves, their families, their homes and their communities.

This article may be cited as: Faria MA. Firearms, gun control, and the role of the militia in modern society. HaciendaPublishing.com, October 26, 2018. Available from: https://haciendapublishing.com/firearms-gun-control-and-the-role-of-the-militia-in-modern-society-by-miguel-a-faria-md/

1 thought on “Firearms, gun control, and the role of the militia in modern society by Miguel A. Faria, MD”