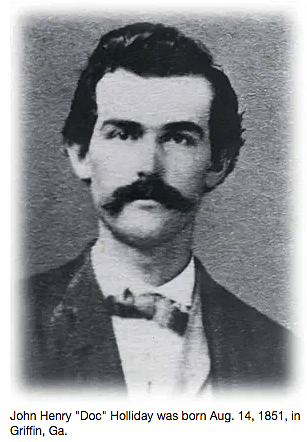 What we can learn from Doc Holliday by David C. Stolinsky, MD

Doc Holliday received a classical education in his native Georgia. He then graduated from the Pennsylvania College of Dental Surgery, class of 1872. But his frequent cough from tuberculosis, from which his mother and brother had died, caused patients to go elsewhere. Holliday abandoned his dental practice and went west to the Arizona Territory, hoping that the dry air would help his condition. He settled in Tombstone, a boisterous mining town.

The character of the town is exemplified by this grave marker in Tombstone’s Boot Hill Cemetery. Whether it is real or a grim joke remains unknown. There is no Les Moore in the town’s death register, but an old man recalled a Wells Fargo stagecoach driver by that name who was killed in a robbery.

Doc became a gambler and gunfighter. He remained unscathed by these dangerous activities, while the disease continued to take its toll. Perhaps he hoped to die by gunfire rather than by tuberculosis.

This brings us to the First Doc Holliday Rule:

In the 1993 film “Tombstone,” lawman Wyatt Earp, his brothers, and his friend Doc Holliday confront a violent outlaw gang. Doc has tuberculosis — of which he will die at age 36 — and should be resting. A member of the posse asks Holliday why he is exerting himself. Doc explains, “Wyatt’s my friend.” The man objects, “Hell, I’ve got lots of friends.” Doc replies, “I don’t.” Here we have the Second Doc Holliday Rule:

When trouble comes, it’s not how many friends we have that counts — it’s what kind of friends they are.

This is relevant to what we call “coalitions.” Some members of the coalition in Afghanistan send only a few hundred troops. Even worse, some of these troops do not patrol at night, do not go into “hot” zones, and fire only when fired upon. That is, even if they spot a Taliban leader, they do nothing if they aren’t fired upon first.

This concept of a “coalition” accords more with the posse member’s idea of friendship than with Doc’s. The concept is so broad that it includes all acquaintances except actual enemies. It bears no relation to loyalty. On the other hand, we have the Brits. They accord more with Doc’s concept of friendship — those who are there when we really need them, even if the situation is dangerous, and even if they are in a weakened condition.

Then we have so-called “friends” who get us into trouble, not out of it. Take the situation in Libya. The Europeans, especially the French, urged military action against Qaddafi’s brutal regime. But because of decades of military decline, they were too weak to take on even a third-rate power, so again they depended on America to do the heavy lifting. As a result, Qaddafi is dead, but Libya is now in chaos and a base for Al Qaeda.

As Mark Steyn observed, “You can have massive welfare or a credible military, but not both.” Europeans found this out years ago. It worked for them — they enjoyed the welfare while America provided the defense. We have yet to discover this sad fact. But if we continue cutting our military, we will be forced to confront it. Then who will provide defense for us?

But back to “Tombstone.” Wyatt Earp is challenged by Johnny Ringo, an unstable killer. Earp knows that Ringo is faster on the draw, yet feels honor-bound to meet him. But as Ringo is waiting at the appointed place, who should show up but Doc Holliday.

Ringo insists that he has no quarrel with Holliday. Doc reminds him that they challenged each other. Ringo protests, “I was only fooling about.” Doc replies, “I wasn’t.” They proceed with the gunfight, and Ringo comes out second best. Here we come to the Third Doc Holliday Rule:

In matters of life and death, the first thing to decide is whether the person is serious or just pretending. And if he is serious, it is best to be careful.

It is impossible to have half a gunfight. Johnny Ringo wasn’t serious about the challenge, but Doc was. It takes only one side to make a fight. If the other party isn’t serious, he can lose just as badly. The runner-up doesn’t get a silver medal — he gets six feet of dirt.

President Obama declared that he didn’t want “perpetual war,” but the choice wasn’t his to make. If extremist Muslim terrorists continued attacking us, Obama’s desires were irrelevant. Narcissists imagine that the world revolves around them. Realists know better.

Movies, like all art, are not meant to provide a precise picture of reality, but to reflect and clarify some aspects of reality. “Tombstone” did not show us exactly what happened during the gunfight at the OK Corral. It did something far more important. It showed us the value of true friends, and it emphasized the difference between being deadly serious and merely fooling about.

The world has changed remarkably since the days of Wyatt Earp and Doc Holliday. But some things haven’t changed at all. The value of true friends hasn’t changed, nor has the importance of recognizing them and treating them accordingly. This lesson we seem to have forgotten. Our best friends through two World Wars, Korea, the Gulf War, Afghanistan, and Iraq are the Brits.

But how did President Obama treat the Brits? On entering the Oval Office, he removed the bust of Churchill the Brits sent us after 9/11. He ostentatiously snubbed Prime Minister Gordon Brown. He gifted Queen Elizabeth with an iPod, and Brown with a set of DVDs of movies — DVDs which could not be viewed on European players. But Obama bowed before the Saudi king. On entering the Oval Office, President Trump did the opposite — restored Churchill’s bust, and had a cordial meeting with British Prime Minister Theresa May.

Like it or not, we have been cast in the role of Wyatt Earp. Like him, we too have reluctantly put on the badge of lawman in a lawless and dangerous world. We too have many faults, as do our friends. But despite these faults, we alone have the capability to stand up to the outlaws.

The question is this: Like Wyatt Earp, do we also have the courage and steadfastness to stand up to outlaws? Or, unlike Earp, are we so busy apologizing for our faults, and so occupied with distancing ourselves from our friends and being submissive to our enemies, that we have no time or energy left for fighting evil?

Finally, we have the Fourth Doc Holliday Rule:

Loyal friends are hard to find. Some, like Doc, are taken from us far too soon. Others we are blessed to have for many years. But there is no way to know this in advance, so we need to cherish them while we can.

Author’s Note: Bill Paxton’s untimely death impelled me to watch “Tombstone” on DVD and post this column. Paxton was the actor who played the youngest Earp brother, Morgan. Morgan Earp was killed in Tombstone by the outlaw gang at age 30. Tombstone was a rough place. So is today’s world. Like the Earps, we need good friends — and we should do the best we can to keep them.

This article may be cited as: Stolinsky DC. What we can learn from Doc Holliday. HaciendaPublishing.com, March 16, 2017. Available from: https://haciendapublishing.com/what-we-can-learn-from-doc-holliday-by-david-c-stolinsky-md/.

5 thoughts on “What we can learn from Doc Holliday by David C. Stolinsky, MD”