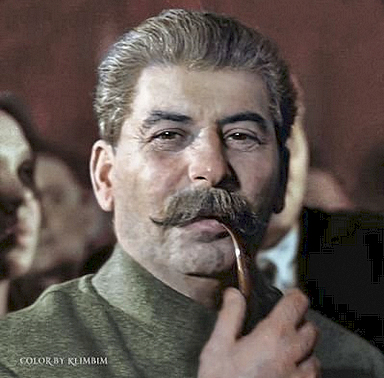 No, Mr. Biden, it was “Progressives” who loved Stalin by David C. Stolinsky, MD

He [Trump] would have loved Stalin.
— Vice President Joe Biden

Although it is difficult to fathom what causes Mr. Biden to make his trademark offhand comments, we can at least try to understand this defamatory remark. Here are two possible explanations for Biden’s latest episode of verbal flatulence:

First, Trump jokingly suggested that if the Russians had indeed hacked the Democratic National Committee e-mails, perhaps they could also find Hillary Clinton’s 30,000 missing e-mails. But Trump said this only after Democrats blamed the Russians for the hack, even claiming that Putin wanted to help Trump get elected. That is, Trump was accused — without any evidence — of being a foreign agent. In light of this very serious slander, Trump’s remark pales into insignificance.

Second, Trump has expressed grudging admiration for Vladimir Putin. Trump remarked, “At least he’s a leader, unlike what we have in this country.” Would I have put it that way? No. I would have said something like this: “Putin and I disagree on many points. But Putin is a strong leader who loves his country and wants to see it stronger. Wouldn’t it be nice if we had someone in the Oval Office who loved our country and wanted to see it stronger?” But I’m not running for president; Trump is. So I am stuck with projecting my ideas onto Trump’s remarks, which are admittedly sometimes poorly thought through.

But what about the substance of Biden’s accusation? Who, in fact, were the warmest admirers of Stalin, and who were his severest critics? One need not pore though history textbooks to find the answer. Take the official organ of the Left, The New York Times (please!). In the 1930s, Stalin forced the collectivization of all Soviet farms.

Stalin seized all farms from the owners and put government bureaucrats in charge of agriculture. Farmers resisted, particularly in the agriculturally rich Ukraine — which had been the breadbasket of Europe since the time of ancient Greece. But no one resisted Stalin and survived. Stalin ordered the seizure of all grain from Ukraine, leaving the people with little to eat. In other words, Stalin engineered a famine in which between 2.4 and 7.5 million Ukrainians and others died, with 6 million a generally accepted figure.

A word was invented to describe this atrocity: Holodomor, meaning extermination by hunger. It is considered an example of genocide, rivaling the Armenian Genocide and the Holocaust. And it is the primary cause of continuing animosity of Ukrainians toward Russians and the Moscow government, whether Putin or anyone else is in charge there.

This sad episode resulted in even more sadness. When Stalin ordered farmers to hand over all their grain, some hid grain to feed their families. But like all totalitarian regimes, the communists encouraged informers. One of them, 13-year-old Pavlik Morozov, informed on his father. As a result, the father was executed, the boy was killed by his family, and Pavlik was honored with a postage stamp. Totalitarians honor informers, even those who inform on their own family — perhaps especially those who inform on their own families.

But how was the Holodomor reported in Western media? The New York Times sent reporter Walter Duranty to the Soviet Union to check out the story. He reported that there was no famine — and was awarded the Pulitzer Prize for his fabrication. To this day, The New York Times refuses to return the award.

So-called liberals, from the Roosevelt administration to leading Democratic politicians, were apologists for Stalin’s tyranny. Leading leftist authors like H. G. Wells and George Bernard Shaw praised the communist “paradise.” Meanwhile, conservatives both in America and elsewhere condemned it, as witness Winston Churchill.

And what about the other crimes of Stalin?

So who really loved Stalin? And who didn’t?

If I were Joe Biden, I’d keep my mouth shut about this subject. But, thank goodness, I’m not Joe Biden, who rarely keeps his mouth shut about anything. And, also thank goodness, I’m not a spokesperson for the Democratic Party. So I am not burdened with the task of trying to explain away its sad history of ignoring, denying, and apologizing for the crimes of communism. But for those who have that burden, projecting the blame onto Donald Trump might seem like an expedient way to sweep that guilt under the carpet.

This article may be cited as: Stolinsky DC. No, Mr. Biden, it was “Progressives” who loved Stalin. HaciendaPublishing.com, September 2, 2016. Available from: https://haciendapublishing.com/no-mr-biden-it-was-progressives-who-loved-stalin-by-david-c-stolinsky-md/.