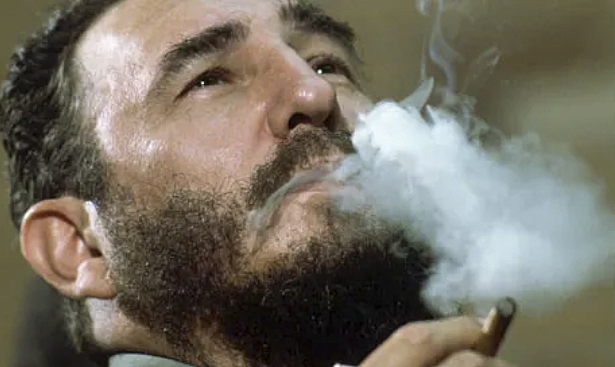 On Dec. 4, 2002, the Associated Press (AP) reported how Fidel Castro has given up smoking his beloved cigars, despite the Caribbean Island fame and investment in that tobacco product. Now Castro is critical of rum drinking as well, in the name of advocating for the well-being and public health of his people.

Speaking to a group of medical students the previous evening, the Maximum Leader, who the AP cited as the Cuban “President” Castro, rhetorically asked the question, “How much damage has rum caused any society? How many deaths from the irresponsibility of accidents and alcoholic drinks?”

The AP report carried by CNN described the so-called “heavy investment in [Havana’s Latin American Medical] school by his poor country as proof of the superiority of socialist morality and as example of its health system.”

Yet the report failed to mention that of the eight U.S. medical students attending Havana’s “free” medical school and who arrived in April 2000, only two remain. The Rev. Lucius Walker, founder of the New York-based Pastors for Peace, who has been in charge of the admission process for U.S. medical students, blames the extremely high dropout rate not on the deplorable conditions in the communist island but on the “[low] quality” of the applicants. He also complained to the Orlando Sentinel (June 3, 2002) that “We get a lot of interest expressed but not everyone is ready to go. “

So much for “free” medical education in the socialist “worker’s paradise.”

The AP report also failed to mention that Cuba’s sending of “thousands of its own doctors to remote, often disaster struck areas to help millions of the poorest people in the hemisphere” has less to do with humanitarian concerns and more to do with the exportation of socialism to underdeveloped and other Third World nations, a propaganda scheme that has been appropriately entitled Castro’s ‘Doctor Diplomacy.’ (1)

As I pointed out in my book “Cuba in Revolution: Escape From a Lost Paradise” (2002), the exportation of Cuban doctors for propaganda purposes to Third World countries by the communist regime is easy because Cuba has an overabundance of physicians and professionals of all types, a perpetual oversight of the communist central planners.

Yet many of these physicians, professionals and other overly educated technocrats, if not sent abroad, prefer to work in the tourism industry, which provides access to U.S. dollars, sometimes up to $300 per month, rather than accept the $20 to $45 monthly State salary paid to Cuban doctors and other professionals. (2) A sizable number of them would escape to freedom if they had a chance. Ask the Cuban entertainers and athletes who have done so in droves in recent years!

The reality is that the socialized “free” system of Cuban health care remains in dire straits. (3) “Be that as it may, because of the oversupply of doctors, physicians are sent abroad to export Cuban medicine and extol socialism and ‘free and equal’ health care. Yet, collectivism and (false) egalitarianism in medicine do not begin to equate to quality (or even meaningful) medical care. The hard reality is that what Cuban physicians can do for their sick patients remains quite limited and that was the case well before the collapse of the Soviet Union in 1991, with the end of overt Soviet economic aid.” (4) The indoctrination purpose of Castro’s ‘doctor diplomacy’ is spelled out by the authors of the previously cited Medical Sentinel article:

“The indoctrination begins with the premise that the physician owes to society and the Castro regime their medical education. It continues in terms that the physician must become a communist and he or she must pledge to improve his or her skills as a communist in parallel to his or her skills as a physician. Finally, the graduate swears to be like Ché Guevara. Although this last goal of Castro’s medical education may provide a new fashion to European designers, the fact remains that violent revolution, destruction, and death were all part and parcel of the preaching and deeds of the communist martyr of Cochabamba.” (5)

Incredibly, an American radio icon, Paul Harvey, has also fallen for Castro. On the same day the AP report appeared in print, Harvey praised the Cuban Autocrat-in-Chief in his noon radio broadcast, convinced that Castro now “has changed” in the same way that he, Harvey, has changed ­ a man, we learn from Harvey, he has been acquainted with since before the Cuban revolution!

Amazingly, Harvey approved and seemed to agree with Castro’s statement: “We will not rest until this is the most humane, most just and most honest society that has ever been created.” Again, incredible!

Apparently, it doesn’t bother Harvey that thousands of Cubans from all walks of life have died because of the communist nightmare that Castro has unleashed. If I may humbly quote my book once more:

The best conservative estimate is that between 30,000 to 40,000 Cubans have perished attempting to flee Castro’s regime, mostly succumbing in the treacherous waters of the Florida Straits. My figures for death at sea are consistent with Juan Clark’s “Cuba: Mito y Realidad,” who estimated that more than 16,000 Cubans had made it to freedom since 1959 up to the time of the publication of the book in 1992. Clark estimated that figure represented only one out of three Cubans who attempted to make it to freedom. Countless thousands of others have died indirectly as a result of Fidel Castro’s collectivist policies, unspeakable privations, malnutrition, and the general desolation of a once prosperous island ­ an island that Christopher Columbus called the “Pearl of the Antilles.” Since Fidel Castro took over the island in 1959, the best figures that we can glean is that between 30,000 to 40,000 people either have been executed en los paredones de fusilamiento (in the firing squad wall) or have died in the hands of their communist jailers. The scholar Armando Lago has arrived at a death toll of 105,000 victims directly attributed to the regime of Fidel Castro. Yet, if we use the higher estimates, all of those who died escaping the regime, shot or in custody, the figure well exceeds 100,000. One day, like with the Soviet Union, we will learn the truth, and more accurate numbers will be available, recording the full extent of the brutality and destruction of communism in Cuba. (6)

I have always respected Mr. Harvey. I would like to think he was misled, perhaps by his younger staff, but then you pause to think ­ Harvey is a spokesman for Archer Daniels Midland (ADM), the giant agribusiness mega-corporation that has been a staunch supporter of Fidel Castro and the lifting of the U.S. embargo!

ADM has been at the forefront of trading with the enemy. Dwayne O. Andreas, its former Chairman and CEO, has long been an advocate of lifting the Cuban embargo. He has been identified as being “the financial angel” who funded the much-publicized grandmothers visit to Elián in the U.S. And Charley Reese in the Orlando Sentinel revealed that Mr. Andreas already has extensive commercial interests in Cuba, some of which involve exploitation of Cuban workers. Clinton’s impeachment attorney and Juan Miguel González’s counsel, Gregory B. Craig (who commanded an $800 per hour fee paid by the United Methodist Church), belongs to the law firm that represents ADM as a client.

Asked specifically about Cuban political repression and the fact a half million Cubans have passed through Fidel’s political prisons since 1959 (as substantiated by Freedom House), and the overall, shameful human rights record of the regime of Fidel Castro, Mr. Andreas replied that he “didn’t think about them” in his conversation with Fidel, according to the Reader’s Digest article, “Fawning over Fidel” (May 1996), by veteran reporter Trevor Armbrister.

As to the accumulating evidence of Fidel’s political executions? “That is for the politicians to worry about,” replies Mr. Andreas. Obviously, for these corporations, profits come ahead of freedom. The irony is that without freedom they would also lose their profits ­ as well as their liberties! (7)

And now to conclude, let me suggest to Mr. Harvey that before he invokes the media mantra that I must be another “right-wing Cuban-American from Miami,” perhaps he should read my book to find out for himself the true story of the Cuban Revolution.

In the meantime, I have been told that I need to follow the money for the complete story of the Andreas family and ADM. And that I must read the book “Rats in the Grain” by James B. Lieber about ADM business practices and ethics. Perhaps it’s time that I follow that advice in fact, I’m on my way to the library right now!

Miguel A. Faria Jr., M.D., is Editor-in-Chief of the Medical Sentinel and author of “Vandals at the Gates of Medicine” (1995); “Medical Warrior: Fighting Corporate Socialized Medicine” (1997); and “Cuba in Revolution: Escape From a Lost Paradise” (2002). All three books are available from https://HaciendaPublishing.com.

This article may be cited as: Faria MA. Fidel Castro, Fine Rum and Cuban Cigars. NewsMax.com, December 6, 2002. Available from: https://haciendapublishing.com/fidel-castro-fine-rum-and-cuban-cigars.