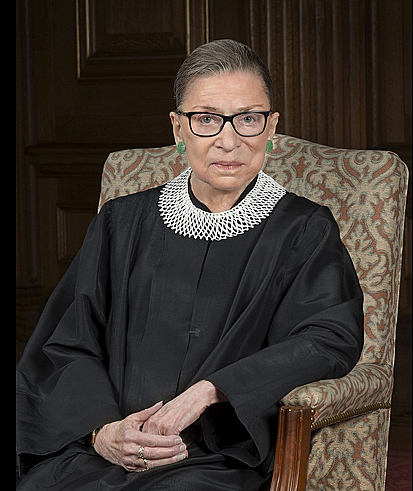 We need resignations from more officials than Justice Ginsburg! by James I. Ausman, MD, PhD

Justice Ruth Bader Ginsburg’s comments were totally inappropriate for her position as Supreme Court judge. Justice Ginsburg should no longer serve as an Associate Justice as she has forfeited her impartiality in future decisions, particularly, if Donald Trump is elected president.  Ginsburg stated on reflection that her comments were “ill advised.” By whom? Is this another Clinton move to influence the election?  Ginsburg, who was a Clinton appointee, knows what she did was wrong.  Either she is not in control of her faculties to have made such statements or she was induced to make them, likely by the Clintons. Either way she is unfit to continue as a U.S. Supreme Court Justice. However, if Hillary wins, it would be another example of the Clintons’ infiltration (and subversion) of the Judiciary, the FBI and the Attorney General’s office in their administrations.

Further, the Director of the FBI, James B. Comey, should resign, as he too offered an inappropriate conclusion to the data the FBI investigation uncovered about Hillary’s violations of handling secret information. Comey issued a long list of violations of Clinton’s written pledge taken at the State Department not to use communications outside of those approved for her job as Secretary of State. The FBI Director concluded that no reasonable prosecutor would bring charges against Hillary for her actions by having an independent server to store and transmit secret government information. Congressman and former prosecutor, Trey Goudy, decimated Comey’s legal logic during his appearance before a congressional panel investigating his conclusions on the FBI investigation into the Clinton e-mail scandal. Goudy deftly indicated how Comey’s conclusions would not be reached by any reasonable prosecutor. Comey’s place was to obtain the facts. He did so. But his conclusions did not fit the facts.  He did not even investigate if Hilliary told lies to Congress, which the evidence shows she did. Comey has lost his credibility and tainted the impartiality of the FBI. He should resign, but won’t.

Likewise, Attorney General Loretta Lynch should resign as her actions in meeting Bill Clinton were obviously pre-planned, held in secret, which is highly unusual, and cast a shadow over what was communicated during their one half hour meeting that might have influenced Lynch’s decision on the FBI conclusions. Her highly touted treasured integrity is compromised, as is Comey’s, and both should resign. How can they face themselves and say that they are honest public servants.

But neither of them will resign. Why? In Comey’s case, according to sources who know him well, he stated that he did not want to make a decision so momentous that would influence the national election by bringing charges against Hillary Clinton. He bowed to political fear and political correctness, and was unwilling to do what was right because he was afraid of the consequences personally. That was a personal decision, not one expected from the Director of the highest domestic investigative agency in the USA. He should not have been put in the position of making the legal decision on his investigation but was by Loretta Lynch’s refusal to decide in the case. She also acted to preserve her political future over personal integrity by withdrawing from making the decision only after the public disgust with her secret meeting with Bill Clinton. She knew better than to meet Clinton privately, whose wife was the subject of an investigation that would ultimately reach her office. Lynch also likely was rewarded with the opportunity to have a place in the upcoming Clinton administration, if that occurs.

All of these events show the tentacles of corruption and the disregard of law
that the Clintons have demonstrated over his political careers, as Bill Clinton now reached the Attorney General, Director of the FBI, and an Associate Justice of the U.S. Supreme Court likely influencing what they would say. My conclusions are not proved and can never be proved because they are cloaked in secrecy.  But they outline the stench of the Clintons’ meddling for personal gain. The above scenarios are similar to the corrupt practices that skirt the laws that the Clintons have used for years. This corrupt behavior is also part of the formation and use of the Clinton Foundation, which has money from donations that are virtually untraceable from foreign powers, according to other sources.  Bill Clinton has likely persuaded three people in high positions to jeopardize themselves and their integrity by making inappropriate statements and actions that would favor Hillary in her presidential campaign.

It is all an example of how corrupt people can use the legal system to enrich themselves and stay above the law in a system they design for themselves that no average citizen could use. It is an example of the corruption in our sources of Power also used to enrich the self-selected elite who believe that they know more than the people and are smarter than the average citizen and thus, should be above the Law. It is Animal Farm (1946), “All pigs are equal but some are more equal than others” written by George Orwell as a satire on communism. Similar descriptions about the corruption of the Principles of Liberty were written by Frederic Bastiat in France (1850). Yes, all of these actions are the results of the corrupting socialistic system of the self-anointed elites who are gaining control of the nation. That is what we are seeing worldwide.

But they will not resign and that is a tragedy for the rule of law — a result of the loss of integrity from the corruption of morality and the complete separation of religious teachings from civic affairs and government. The outcome is a further deterioration in the democratic system of law, a compromise of integrity, and a loss of faith in the parts of the government they represent as public servants. That there is one set of rules for the Establishment and the self-appointed elite and another for the people is contrary to liberty and is tyrannical. This inequality in the application of law is the fundamental cause of the worldwide climate of revolution that we are seeing, starting with the Arab Spring revolt in the Middle East that was quickly hijacked by others interested in power and control, not the liberation of the people. This potential revolution could reach from the Middle East, Ukraine, and the rest of Europe to China, South America, Cuba, Venezuela and eventually to North America.  It is the same revolution against those self-anointed elites and corrupted elected officials whose purpose is to gain and maintain power; we are beginning to see this all over the world. The principles of the revolution are the same everywhere, but its expression is shaped by the circumstances in each country and timing.

This revolution is happening in the USA and is symbolic of the popularity of Bernie Sanders and Donald Trump as anti-establishment candidates. They have received unexpected but overwhelming support from the people, particularly with their stances against separate rules for the elite and the people, which resonate with the public. We are seeing the end result of these policies in the subjugation of the people in the Middle East, as well as the socialized Europeans with leaders who want ultimate power over the people. Compromise of democratic principles leads to authoritarian collectivist states. It is the fundamental policy of Obama, who advocated “Discussion and Diplomacy” with Iran, as well as in dealing with the recent uprisings and murders in France by radical Islamic terrorists. Appeasement and anarchy are the consequences of compromises with Truth and with one’s integrity to sustain power. Unquenchable thirst for power is ultimately the cause of the destruction of political systems, which we witness worldwide. But much of the public is in denial of what is truly happening.

This article may be cited as: Ausman, JI. Obama’s minions need to resign. HaciendaPublishing.com, July 19, 2016. Available from: https://haciendapublishing.com/we-need-resignations-from-more-officials-than-justice-ginsburg-by-james-i-ausman-md-phd/.