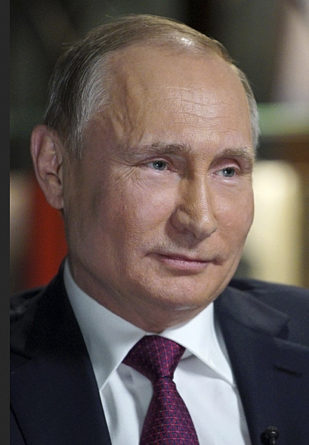 Vladimir Putin — Part 1: The enigmatic Russian leader will need to show statesmanship in the Syrian crisis by Miguel A. Faria, MD

I write these words and I shudder because as I read the BBC headlines and reports in the early morning hours I learned that President Trump ordered, and the U.S. has launched, a devastating missile strike on a Syrian airbase. The American attack is in retaliation for the Syrian chemical attack on a rebel-held town in northwestern Syria a few days ago in which at least 80 of their own Syrian people, including dozens of women and children, were killed. Here is how the BBC reported the U.S. missile launch:

Fifty-nine Tomahawk cruise missiles were fired from two US Navy ships in the Mediterranean. Six people were killed, the Syrian army said. It is the first direct US military action against forces commanded by Syria’s president. The Kremlin, which backs Bashar al-Assad, has condemned the strike.

Up until now Trump and Putin have tried to collaborate in Syria at least against the areas held by the terrorist Islamic Caliphate (IS). How Putin reacts to this American unilateral action, devastating for his protégé and main ally in the region, Syrian dictator Bashar al-Assad, may help decipher the long-term political and military intentions of the enigmatic Vladimir Putin.

Following the U.S. airfield strike, China released a neutral message calling for restraint. The UK, Nato, and Japan supported the American action, while Iran, Syria, and Russia condemned it. In the Middle East, Israel, Saudi Arabia and Turkey strongly supported the American missile strike. Prime Minister Benjamin Netanyahu stated: “President Trump sent a strong and clear message today that the use and spread of chemical weapons will not be tolerated. Israel fully supports President Trump’s decision and hopes that this message of resolve in the face of the Assad regime’s horrific actions will resonate not only in Damascus, but in Tehran, Pyongyang and elsewhere.” Turkish President Tayyip Erdogan, who had been a strong opponent of the Assad regime and had already denounced the Syrian chemical attack a few days earlier, also supported the American action as “strongly positive” and his foreign ministry spokesman stated that “Turkey would fully support steps that would ensure accountability for the Syrian regime.”

But what do these developments mean for Putin’s and Russia’s aspirations in the Middle East? Consider the fact that Putin has his sights on building an Eastern Mediterranean power base centered in Syria, relying on the acquiescence and assistance of his ally Syrian dictator Bashar al-Assad.

Russia has plans for building military bases in Egypt and just recently had been given the go-ahead by Assad to build an offensive submarine and naval base in Tartus, Syria, a development that would have tilted the balance of power in the Mediterranean towards Russia. Those with knowledge of geopolitics and history would recognize that Putin’s actions in the Eastern Mediterranean have been unprecedented by the Russians. The Soviets attempted these actions in Egypt and Libya and ultimately failed. In centuries past, Catherine the Great and her all-powerful minister and lover, Grigory Potemkin (1739-1791), and their successors, Tsars Nicholas I and Alexander II, only dreamed of projecting Russian power through the Straits with the building of naval bases in the straits and the Mediterranean that could challenge the Western powers. The Ottoman Turks, supported by England and France, prevented the fulfillment of that Russian dream, a dream that would have been a nightmare for the British fleet, French possessions in the Mediterranean, and the European balance of power.

Putin had been fulfilling a statesmanship role in the Middle East, easing tensions with Russia’s traditional enemy Turkey, increasing Russian influence in the region, and projecting Russian power in Syria and planning to do the same in Egypt and Libya as well — with the help and connivance of Syria and Iran. Iran’s Supreme Leader Ali Khamenei has continued to court Putin and has even offered the Russians an airbase in Iran. This generosity of course is a quid pro quo arrangement for Iran to continue to exert power in Syria though Hezbollah, as well as asking for Russian acquiescence in building a railroad passing through Syria allowing Tehran access to the Mediterranean Sea.

After the American missile strike, it appears the U.S has made reinvigorated allies in the region besides Israel and Jordan. Turkey’s Tayyip Erdogan may be at the forefront of that alliance  — this despite the capricious animosity of the European Union (EU) towards the Turkish president. Closer ties between the U.S and Turkey is practical not only because of their common fight against ISIS but also because of Turkey’s traditional fear of Russia, a fear that spans the time farther back than the communist USSR to tsarist times. Russia has been for centuries the natural enemy of Turkey for geopolitical and historic reasons — namely the attempted use of power in the region and the Russians’ repeated efforts for unconditional passage, if not outright possession and even annexation, of the straits between the Black Sea and the Mediterranean. In the Crimean War (1853-56), France and England supported the Turks and fought Tsarist Russia to preserve the littoral and straits in the Black Sea and the Sea of Marmara of the flagging Ottoman Empire, “The Sick Man of Europe” — from falling in the hands of the expansionist Russians. It appears that Trump may have capitalized on this history and has managed to force a wedge between Erdogan and Putin with the U.S. attack on the Syrian airfield. But was it worth it?

I had hoped the Trump-Putin cordiality, in general, and the close military cooperation in Syria against ISIS, in particular, could have continued, but that may not be the case. The Russians, though, may be forced to cooperate, as ISIS and Islamic terrorism target not only America and the West, but also Russia, as happened in the suicide metro bombing attack of April 4, 2017 by a young Moslem Kyrgyz terrorist in St. Petersburg. Russia’s underbelly is surrounded by Islamic nations and territories, not all friendly to the Russian Federation. Moreover both Trump and Putin along with Theresa May of Great Britain and Tayyip Erdogan of Turkey have been at the forefront opposing the New World Order globalization, forced secularization, collectivization and regimentation campaign of the EU and the internationalist elites.

For this reason I think the strike on Syria was a mistake: ISIS is the immediate enemy, not Syria; and the NWO globalization is the long-term enemy, not nationalist Russia. Trump was misled by his newer, neoconservative and internationalist advisors. I only hope that he will gain some political capital out of it, but otherwise that he returns to his instincts and common sense, and to the promises he made to his conservative supporters, who elected him against all odds.

With the globalization drive and the new Syrian crisis ahead, Russia will see itself more than ever surrounded by hostile powers, and Putin will have to decide who are and who are not his friends and separate friends from foes. Trump will need to do the same. The message has now been sent to Syria and other rogue nations that violation of treaties to which both the violator and the U.S. are signatories (i.e., in the Chemical Weapons Convention of 1993) will not be tolerated; committing war crimes in the process, and in a war in which the U.S. is also involved, will have dire consequences.

Putin may also take home the message that further aggression toward his neighbors and seizure of territories by force, as he did in the Crimea, will lead to untoward effects for Russia; that the war in the Eastern Ukraine should end; that hostility to his neighbors should cease; and that the national security of the U.S. and its allies will be safeguarded.

North Korea and its dangerous infant terrible, Kim Jong-un, with his tantrums and his restless fingers threatening nuclear war, should also take notice that further missile attacks and provocations towards South Korea and Japan, America’s allies, are acts leading them likewise down the perilous path of a defensive American pre-emptive missile strike; and the same goes for China and its belligerent actions in the disputed islands of the South China Sea.

None of this, we hope for the peace of the world, negates the intention of the United States to have cordial relations with both Russia and China, on one side, and the EU, Great Britain, and Japan, on the other. By the same token, the U.S., should not become the world’s policeman and impose “democracy” in all parts of the world, nor to change its tune to joint the European socialist elites in their campaign of globalization and regimentation. The people worldwide have recently made it clear they yearn for nationalism and the freedom to follow their own road of self-determination, independence, and peace.

This article may be cited as: Faria MA. Vladimir Putin — Part 1: The enigmatic Russian leader will need to show statesmanship in the Syrian crisis. HaciendaPublishing.com, April 7, 2017. Available from: https://haciendapublishing.com/vladimir-putin–part-1-the-enigmatic-russian-leader-will-need-to-show-statesmanship-in-the-syrian-crisis-by-miguel-a-faria-md.

Similar versions of this article appeared in GOPUSA, April 10, and in the Telegraph (Macon), April 17, 2017.

7 thoughts on “Vladimir Putin — Part 1: The enigmatic Russian leader will need to show statesmanship in the Syrian crisis by Miguel A. Faria, MD”