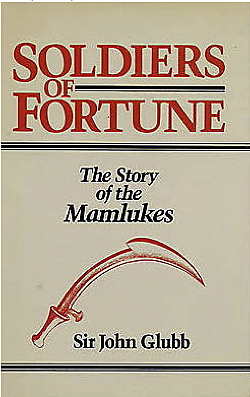 Soldiers of Fortune: The Story of the Mamlukes (1973) is another undiscovered gem of a book by a scholar, historian, author, and soldier, a British Lieutenant General, Sir John B. Glubb (1897-1986), better known as Glubb Pasha by the Arabs he commanded in the Middle East in his many years of service while in the British army. The tome is a masterpiece of research on a topic little known to students of history — arcane, indeed, to most Western scholars and historians!

This tome is really a chronicle of the redoubtable Mamluks of Egypt and Syria, who ruled for 250 years, but whose accomplishments have all but been forgotten from the pages of history. Who were the Mamluks?

The Mamluks were Turkish or Circassian (i.e, from the north Caucasus) slave soldiers, bought in the slave markets of Ukraine, Georgia, Kazakhstan, Turkmenistan, and other areas of southern Russia. They were bought as children in the Islamic slave markets and brought to Cairo by the ruling class of Egypt where they were given military training to serve as mercenary slave soldiers serving the Ayoubid dynasty of Sultans (1169-1250). The Ayoubid dynasty, you will remember, had been founded by Saladin, who succeeded the Seljuk Turks in Egypt and Syria. Eventually these Turkish slaves overthrew their masters and became the rulers, establishing a unique from of government in Medieval Egypt and later Syria. Rather than hereditary rule, Egypt under the Mamluks was ruled by a disciplined, military caste of Turkish and Circassian soldiers, headed by a Mamluk Sultanate (1250-1517), which continued the same tradition of recruitment and military training under Islamic law. The social status of the Mamluk slave soldiers as military leaders ranked above the freeborn Egyptians and others in the Arab Muslim population, who served in the civil service, religion, and all other occupations, but not in the military.

Most history buffs identify the Mamluks as the mounted Egyptian warriors who, gallantly but inadvisably in 1798, charged Napoleon’s seasoned French Army of the Orient at the Battle of the Pyramids, only to be massacred with infantry and artillery fire. But there is a lot more to their story. The Mamluk army that fought the French were only the distant descendants of the Mamluks of yore. These Turkish remnants were no longer Mamluk warriors, but Egyptian patriots of Turkish descent, who took the arms and banners of their military ancestors — scimitars, lances, uniforms and banners — which had been stored by their families for centuries as priceless relics of a glorious past. These same relics were then pulled out of their old trunks, dusted off, and used to fight and repel the French invaders! Eventually some of these defeated Mamluks joined the French army of Napoleon and fought in the Battle of Austerlitz of December 2, 1805 and in the suppression of the Madrid uprising of May 2, 1808.

In the years that followed, the Egyptian Mamluks were perceived as a threat to the ruling Ottoman Turks and their appointed governor in Egypt, Muhammed Ali, who wanted to seize power for himself. The glorious Mamluk past haunted their descendants. On March 1, 1811, Muhammed Ali invited Mamluk leaders to a parade in Cairo. Seven hundred Mamluks paraded and then were led to an ambush by Ali’s army in what has come to be called the Massacre of the Citadel. Over the next several weeks, three thousand Mamluks and their relatives were hunted down and massacred, ending their legacy in Egypt. Hundreds of Mamluk structures —i.e., marvelous art and architecture in tombs, mosques, and madrassas, stand as forgotten sentinels of the Mamluk glorious past in the suburb of Cairo.

What did the Mamluks accomplish? In 1250, the Seventh Crusade led by the King of France, Louis IX, a saintly monarch who wanted to recover the Holy Land for Christendom, was defeated at Damietta in the Nile delta by the Egyptian Mamluks, led by their commander Baybars. After this victory, his overlord, Qutuz, became the founder of the first Mamluk Sultanate in Egypt.

A more serious event was then to follow. The Mongols were advancing, pillaging, plundering, and killing as they went, seemingly unconquerable warriors. These fierce nomadic Asian hordes galloping from the deserts and steppes of Central Asia were now invading and devastating the once prosperous Middle East, sweeping and terrorizing Arabs, Persians, Turks, Christians and Muslims alike. The Mongols were erasing the beautiful mosques, churches, palaces, and market squares, as well as destroying the simple abodes of the common folk; cultivated fields were trampled and burnt and hundred of thousands of people massacred — this destructive scourge of the earth of the undefeated Mongol hordes was led by Genghis Khan’s grandson, Hulagu (1256-1265). Mongol policy was indiscriminate pillage and plunder, supported by terror as their modus operandi; villages and towns, so terrorized and demoralized, would submit immediately to their will.

Unbeknownst to most historically informed denizens of the world, it was the Egyptian Mamluk army that stopped the advance of the fierce Mongols hordes. Baghdad was sacked by Hulagu in 1258; Damascus followed suit in 1260. As reports of the devastation trickled down to Cairo and became known to the newly installed ruler of Egypt, Sultan Qutuz marshaled his army to meet the invaders. That same year in 1260 at the Battle of Ain Jalut (“The Spring of Goliath”) Hulagu’s Mongol commander and his army encountered the Mamluk Army led by the Sultan Qutuz and his Emir Baybars. The Mongols were shocked to behold the perfectly discipline Mamluk army waiting to meet them with colorful banners fluttering in the wind, their treasures on display, and their scimitars flashing. And in the fierce battle that followed, the Mongols for the first time ever met utter defeat. The Mongols watched their armies being soundly defeated, and those of their comrades who stood their ground saw their bodies sliced cleanly in half, severed in battle by those same flashing scimitars wielded by the dextrous hands of the Mamluk cavalry. Thousands of Mongols were killed in battle, many more drown trying to swim the river separating them from an escape route. Those captured were also sliced in half as their comrades watched in horror. It would be a lesson that would take over a century for the Mongol khans to forget.

The Mongols thus repulsed, the Mamluks turned their attention to the Latin Kingdoms established by the Crusaders to the north in the Holy Land. One by one, the small armies of these Christian kingdoms bordering the Mediterranean were defeated, and their territories annexed by the Mamluks. Tripoli fell to the Mamluk Sultan Qalaoon in 1289. The last bastions of resistance were now in the Crusader city of Acre and the island of Cyprus. Acre fell to the Sultan Khalil who defeated the desperate, last remaining garrison of Knight Templars in 1291. Cyprus was not conquered until 1426, when the Mamluks launched a major naval expedition by order of the Sultan Barsbai. It is worth recounting that it was not Saladin, the chivalrous Ayoubid Sultan who befriended King Richard the Lion Heart, but these Mamluk Sultans, who are remembered fondly in the ballads and histories of the Moslems of the Middle East today because they defeated the last Christian Crusaders and expelled their Latin Kingdoms from Palestine.

And when the second wave of Tatar and Mongol warriors, led in 1394 by the ferocious Timur the Lame (Tamerlane; 1336-1405), swept again through the Middle East and Palestine, desolating civilizations as they went, it was the Mamluks rulers of Egypt and Syria who came north to confront them. Tamerlane’s army was checked for the first and only time ever in an indecisive battle in Syria. Shortly after in incredibly mysterious circumstances, the Mamluk army left the field and began disintegrating as it marched south, back to Egypt, where a child sat in the throne of the Mamluk Sultanate. Tamerlane had already overrun the Persians. He now turned north and began wreaking havoc in the Ottoman Empire, sacking, looting, and burning with his nomadic army. In 1401, Baghdad and Damascus were once again pillaged, plundered, and burnt to the ground by Tamerlane, just as Hulagu had done less than a century and a half earlier. Tamerlane did not march to Egypt, instead he marched northwest and defeated the Ottoman army led by Sultan Bayazid I at the Battle of Ankara in 1402. Bayazid and his son were captured, and they died in captivity. Tamerlane died of fever in 1405 on his way to conquer China.

How did the Mamluk saga end? We have already recounted their final end. A better question is how did they lose their power? A ferocious Ottoman Turk, Selim I “the Grim,” assumed power following the forced abdication of his father Bayazid II. The Mamluks have been disdainful of the use of cannon, which they considered dishonorable warfare. In two battles in Syria in 1514 and 1516, the Mamluk army was defeated by the Ottomans. The gallant and old-fashioned Mamluk cavalry was no match for the modernized army of Janissaries backed by Selim the Grim’s state-of-the art massive artillery. In 1517, Tuman Bay II, the last Mamluk Sultan of Egypt, was defeated and his army destroyed in Cairo. Thereafter, Mamluk histories virtually cease, except for occasional rebellions that the Ottoman Turks easily crushed. All power passed to the Ottoman Turks and Constantinople, until Napoleon as we have described.

Pasha Glubb has given us an enchanting book full of fascinatingly arcane (but not forbidden) history worth reading and possessing in a treasured library. This book is recommended without caveats, lucky you if you can find a nice copy!

This article may be cited as: Faria MA. The Story of the Mamlukes by British Commander Glubb Pasha (1897-1986). HaciendaPublishing.com, February 19, 2014. Available from: https://haciendapublishing.com/the-story-of-the-mamlukes-by-british-commander-glubb-pasha-1897-1986.

(Soldiers of Fortune: The Story of the Mamlukes by Sir John B. Glubb (Glubb Pasha). Hodder and Stoughton, London, England, 1973, 480 pages with Index.)

The photographs used to illustrate this book review for Hacienda Publishing came from a variety of sources and do not necessarily appear in Glubb’s Soldiers of Fortune.