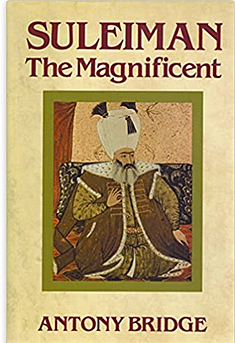 Suleiman the Magnificent and His Time

Suleiman the Magnificent: Scourge of Heaven by Antony Bridge is an engaging, but not exhaustive, narrative of the major events in the life and times of the great Ottoman Sultan Suleiman (r. 1520-1566). I was not disappointed in this book, which reads like a charming storybook. The tome is at times suspenseful, always informative, and frequently suitably illustrated, including excellent illustrative maps. I wanted to learn not only about Suleiman’s life and his position in the constellation of Renaissance rulers of this age but also about the interplay with other rulers and subordinates — and in that regard I was satisfied. This book is as much a sketch of the life of the Holy Roman Emperor Charles V (r. 1519-1556) and a recollection of the treacherous exploits of Francis I, King of France (r. 1515-1547), as it is a biography of Suleiman. We must also mention the book contains vivid descriptions of the heroic defenses of the Knights of St. John in Rhodes in 1522, led by their Grand Master Philip Villiers de L’ Isle Adam, and in Malta in 1565 after becoming the Knights of Malta, led by Jean Parisot de la Valette; the raids of the Barbary Coast corsairs in the Mediterranean and the islands and coastal towns of Italy commanded by the renegade admirals of the Turkish fleet, Barbarrosa and Dragut.

In the narrative, Charles V stands out as a hard-working, conscientious, wise ruler without pretenses and more tolerant than his successor, Philip II, King of Spain, who was also hard-working and devoted but ascetic to the point of being puritanical. Charles is a courageous soldier and commander. Although always short of cash and hard-pressed for money, the Emperor is correctly depicted as the greatest ruler of his age, contended for the post only by the Sultan Suleiman, despite the surfeit of great Renaissance figures vying for the title. Francis I, King of France, who remains a great hero of the French up to the present day, is pretentious, always jealous of Charles, handsome, arrogant, easy going to his friends, but overbearing and treacherous to those he dislikes or perceives as enemies. A pain in the side to Charles V, Francis I is willing to collaborate with the Turks to oppose the Hapsburgs, Christendom, and the security of the West. We even get an incomplete sketch of Henry VIII, who is only tangentially involved in the struggle between the Cross of the West and the Star and Crescent of the Islamic Turks. Henry is more favorably depicted by Bridge in this book than the veritable tyrant he became in the historic record. The portrait of Don John of Austria is surprisingly desultory, as unfavorable as it is incomplete, but he features later in the Battle of Lepanto after the reign of Suleiman. A much better picture of Don John is painted in The Galleys of Lepanto by John Beeching (1982), which is, in fact, recommended as an even more colorful book on the characters and the era.

But in this book you will learn fascinating details about the siege and evacuation of Rhodes by the heroic Knights of St. John (aka the Knight Hospitallers), details of the celebrated Turkish assault on the island of Malta (1565), the invasions of the Balkans and Hungary by Suleiman, as well as his siege of Vienna, and you will not be disappointed. In fact, the book also covers a bit of the life and misadventures of his successor, Selim II, the Sot, which was necessary in concluding the narration of the story of Suleiman the Magnificent. And the author did so, concluding with the conquest of Cyprus and the Battle of Lepanto, which followed in its wake (1571).

Suleiman comes out of the pages of the book as usually a very wise but crafty ruler; another law-giver, a Justinian, but at times megalomaniacal for fame and honor. Usually just, but still a man of his age, Suleiman could be as ruthless and cruel as he felt the occasion demanded. And yet he was easily influenced by the two people closest to him — his loyal and devoted Grand Vizier, Ibrahim, who he eventually had strangled because of the suspiciousness and intrigues of the other most important person in Suleiman’s life, his wife, Roxelana. Cruel and ruthless he could be: Suleiman (photo, right) also had his two most able sons strangled, Mustafa and Bayezid, as to have his youngest worthless son, Selim, the favorite son of Roxelana, succeed him as Sultan.

I recommend this book for those interested in the chronicles of Ottoman history and its clash with the West in the years when the Sultan Suleiman ruled, and up until 1571 when the Battle of Lepanto took place with its historic consequences. Suleiman the Magnificent: The Scourge of Heaven by Anthony Bridge is an easy read of history as well as a suspenseful adventure that complements an even greater book about this period, The Galleys of Lepanto by John Beeching, which I have already mentioned. I categorically recommend these books for those seeking a pleasurable journey into history and more knowledge of this critical period without being exhaustive or tedious in the effort.

This article may be cited as: Faria MA. Suleiman the Magnificent and His Time. HaciendaPublishing.com, March 4, 2014. Available from: https://haciendapublishing.com/suleiman-the-magnificent-and-his-time/

The photographs used to illustrate this book review for Hacienda Publishing came from a variety of sources and do not necessarily appear in Bridge’s Suleiman the Magnificent.