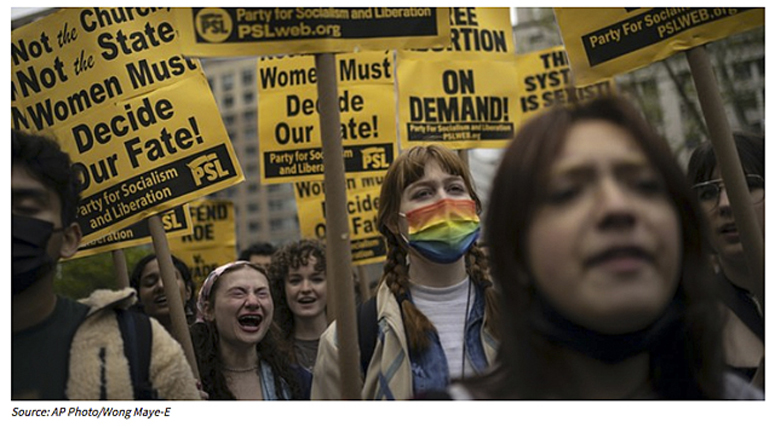 The Real Threat Is the Violent Left-Wing by Jeff Crouere

Ever since the emergence of Donald Trump as a presidential candidate, the media and Democrats have portrayed his supporters as violent. In contrast, almost all the Trump supporters have been peaceful and the left-wing agitators at his rallies were the ones who engaged in violence.

Even on January 6, 2021, most Trump supporters in Washington D.C. were peaceful. Only a few engaged in property destruction and violence against police officers. Nevertheless, ever since that day, the media and Democrats have demonized Trump supporters as violent “insurrectionists.”

There is a sham January 6th congressional committee engaged in a witch hunt, trying to tie President Trump to the violent actions on that day. Instead of encouraging mayhem, in his speech on January 6, 2021, President Trump called for his supporters to march to the U.S. Capitol and “peacefully and patriotically make your voices heard.”

Later that day, President Trump made a video calling on his supporters to leave the U.S. Capitol. He was not advocating the overthrow of the government, the destruction of the U.S. Capitol or any sort of violence toward members of Congress.

Still, he was impeached by partisan Democrats motivated by their blind hatred of him. It was the second unfair impeachment of President Trump. Fortunately, neither one resulted in a conviction by the U.S. Senate.

This dishonest narrative of Trump supporters who support a “Make America Great Again” agenda as violent was being peddled by President Joe Biden last Wednesday. He said, “This MAGA crowd is really the most extreme political organization that’s existed in American history.”

Of course, it is not “extreme” to want politicians to focus on the United States instead of pursuing a globalist agenda. It is not “extreme” to advocate for policies that promote secure borders, low taxes, less intrusive government, more individual freedom, safe cities, law and order, and education that is not infused with the toxicity known as “Critical Race Theory.”

Once again Biden and Democrats are trying to distract from extremism from within their own ranks. For decades, the real threat of political violence has been from left-wing extremists. In the 1960’s and 1970’s, the country experienced actual terrorism from radical leftist groups such as the Weather Underground and the Black Panthers.

In recent years, violence has been perpetrated by far-left activists such as James Hodgkinson, a Bernie Sanders supporter, who almost killed House Minority Whip Steve Scalise and his congressional Republican colleagues at their baseball practice.

On June 14, 2017, Hodgkinson brought two weapons to the baseball field and engaged in a ten-minute shootout with Alexandria, Virginia police officers and a U.S. Capitol police security detail who were at the practice to protect Scalise. If those officers were not present, this violent left-winger may have killed several dozen Republican congressmen.

During the summer of 2020, after the death of George Floyd in Minneapolis, Minnesota, progressive protesters associated with Black Lives Matter and Antifa engaged in a rampage of violence across the country, committing 574 violent riots. This carnage resulted in 2,000 police officers being injured, and countless businesses being destroyed.

Incredibly, after 60 straight days of Antifa violence in Portland Oregon, leading Democrats such as U.S. Representative Jerry Nadler (D-NY) portrayed the left-wing organization as a “myth.” Nadler claimed that the reports of Antifa violence were “being spread only in Washington D.C.” The victims of this violence and the business owners who had their buildings destroyed would undoubtedly disagree.

Unfortunately, the left-wing erupted in threatening protests again this week after a draft opinion from the Supreme Court was leaked to Politico. The opinion, written three months ago by Supreme Court Justice Samuel Alito, had the support of five justices, thus overturning Roe v. Wade and Planned Parenthood v. Casey.

The decision would return the issue of abortion to the states, giving voters the opportunity to determine whether the procedure is legal or not, instead of nine Supreme Court justices.

Since the final decision will not be reached until June or July and changes could still be made, the unprecedented leaking of the draft opinion was surely done to energize abortion supporters and intimidate members of the Supreme Court into changing their position.

According to Chief Justice John Roberts, these efforts will not succeed. In his statement, he vowed that “this betrayal of the confidences of the Court was intended to undermine the integrity of our operations… The work of the Court will not be affected in any way.”

Hopefully, Roberts is correct, and this leak will not succeed in changing the eventual opinion, but it is not stopping the far-left crazies from engaging in blatant intimidation. It has become so terrifying that Justice Alito has been moved to an undisclosed location for his safety.

Groups such as a militant left-wing organization known as “Ruth Sent Us” have shared the home addresses of the Supreme Court Justices reportedly in favor of overturning Roe v. Wade and encouraged protests in front of their homes, putting the lives of the Justices and their family members at risk.

On their website, the fanatics of “Ruth Sent Us” claim that the Supreme Court “routinely issues rulings that hurt women, racial minorities, LGBTQ+ and immigrant rights.” They vow to “rise up to force accountability using a diversity of tactics.”

These “tactics” are unclear, but it is a violation of federal law to interfere or attempt to influence a judge or be “in or near a building or residence occupied or used by such (a) judge.”

Sadly, the Biden administration has done almost nothing to condemn these protests or investigate these fanatical leftists. Would the same response be happening if the threat came from Trump supporters?