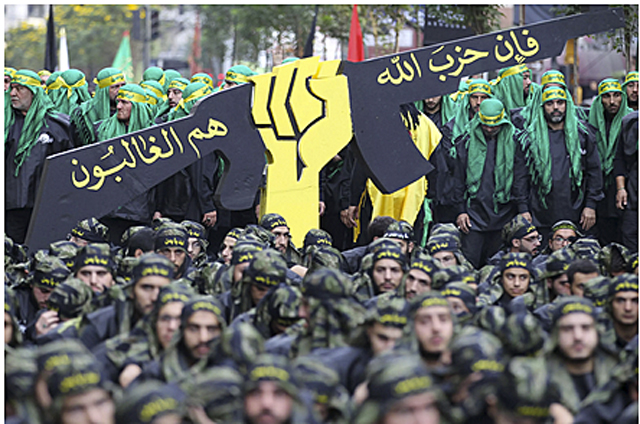 The Challenge of Counterterrorism: Terrorist Groups and Political Legitimacy — A Strategy for the 21st Century by Douglas P. Harden

For example, Hamas, the Irish Republican Army, the Palestinian Liberation Organization, among others engage in terrorism in an attempt to achieve political goals. One group in particular Hezbollah, not only engages in terrorism but also tries to be a legitimate political party in Lebanon, and had a very strong showing in recent Lebanese elections.

Hezbollah, known in Arabic as the “Party of God,” is based in Lebanon and funded and supported by Iran and other entities. Lebanon’s close proximity to Israel makes it an ideal location for Hezbollah to direct activities toward Israel. Developed in 1982 as a result of the Israeli invasion of southern Lebanon, Hezbollah describes itself as the leader of the Islamic resistance against Israel and conducts attacks against Israel and Western targets. They play a role in the Lebanese government as one of two major political parties in Lebanon that represent Shiite Muslims.

Additionally, Hezbollah has cleaned its image in the eyes of Arabs by providing many social services — all the while operating as a militia force. It administers and maintains an extensive social development program that includes hospitals, news outlets, and schools. Hezbollah then is a major force in Lebanese society — a fact that allows the lines to become blurred between Hezbollah’s potential terrorist activities and its legitimate social service initiatives.

Therefore, this is a multidimensional problem possessing several elements for which the United States must devise effective policies.

The current question for US policymakers and political leadership becomes how does the United States deal with terrorist groups that act like legitimate political parties and undertake legitimate and lawful initiatives, albeit aside from terrorism? The answer: Let’s explore.

There are policymakers in the United States political, military, diplomatic, and intelligence establishment who see some distinct advantages in engaging Hezbollah with dialogue and recognition. This proposed strategy, some argue, would assist US counterterrorism efforts because it could be an opportunity to start talks and negotiations that would give US leaders an opening to attempt to convince Hezbollah leadership to stop using terrorism. This proposed approach — i.e., that the United States should engage terrorist movements in select, pre-defined opportunities where the benefits of establishing lines of communication, dialogue, and ideas outweigh the costs of legitimizing violence and alienating allied countries or non-violent opposition groups within Lebanon and elsewhere — could be a very effective counterterrorism strategy. It is complicated because it is a two-dimensional problem — it involves a terrorist group and a political actor, which are one and the same. And that is a vexing problem for the United States.

Political parties and terrorist groups attempt to influence government and government policies, each in their own unique way — one with violence and the other through the political process. Some groups have made a transition from a terrorist group into a legitimate political party, these include the African National Congress in South Africa, the National Liberation Front in Algeria, and the Farabundo Marti National Liberation Front in El Salvador, among others. These examples frame the argument and pose the question for the United States: Should the US pursue, as a component of a counterterrorism strategy and if conditions are ideal, a terrorist group’s transition into a political party? Some terrorist groups maintain separate and distinct sub-organizations, political and military operations being separate. However, some of these groups, as noted, respond to certain incentives. We see this for example with militant groups in Spain’s Basque area, where these groups have oscillated between politics and violence for several decades.

A start to successfully implementing this proposed policy for the United States would begin with the notion that a diplomat would meet with the leadership of Hezbollah, for example, and that this meeting would bestow some amount of legitimacy for the organization. Since Hezbollah’s inception in the early 1980s, they have maintained two major objectives: 1) to liberate Shebaa Farms from Israeli occupation and 2) to increase its political influence as the protector of Lebanon’s Shiite community. Hezbollah has maintained its place in society by competing in Lebanese elections and doing well at times, while remaining, by some assessments, “the most technically capable terrorist group in the world.”

They have shrouded their operations around the world with elements of political activity, military activity, and social services and provisions for Shiite Muslims. For many years, the United States did not distinguish between these three activities. Perhaps, this should change? With the new, proposed approach the US could condemn the military activity but work to amend and alter the political and social elements. The United States is also hindered by the lack of effectiveness of economic sanctions since Hezbollah is a sub-state actor and receives support from Iran.

Confronting terrorism is difficult because terrorism is difficult to counteract and defend against. It is perpetrated by non-state actors who do not conform to modern or accepted forms of warfare. In the twenty years since September 11, 2001, the United States has done well with its counterterrorism policy and strategy, however, there is always room for growth and improvement. The United States counterterrorism establishment should consider adding a prong to its approach: in limited circumstances and under pre-defined conditions, the United States should attempt to begin a dialogue with groups like Hezbollah to assess whether or not such an initiative would bear fruitful results and thus, lead to a change in behavior by Hezbollah and others.

Peaceful resolutions to a conflict are always better than continued terrorist attacks against innocent civilians.

Note: Dedicated to the memory of mentors of the author, Benjamin B. Tate, EdD (Macon State College) and in honor of Loch K. Johnson, PhD, (University of Georgia).

This article may be cited as: Harden DP. The Challenge of Counterterrorism: Terrorist Groups and Political Legitimacy — A Strategy for the 21st Century. HaciendaPublishing.com, May 10, 2022.  Available from: https://haciendapublishing.com/the-challenge-of-counterterrorism-terrorist-groups-and-political-legitimacy–a-strategy-for-the-21supst-sup-century-by-douglas-p-harden/