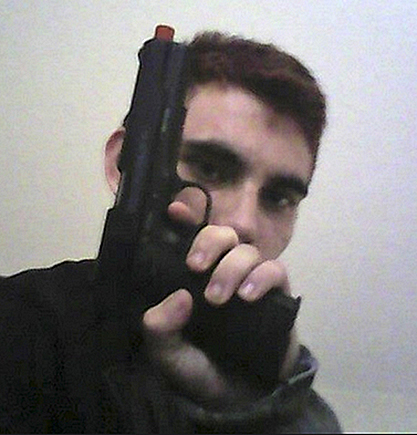 The mass shooting derangement (MSD) syndrome, PC, and the modern liberalism (socialism) ethos that created them! by Miguel A. Faria, MD

Note: After the tragic Parkland, Florida, high school shooting on Valentine’s Day, 2018, there are facts that need to be considered about these killers seeking the limelight and celebrity status and the possible causes behind the morbid motivations that animate them. In the wake of the most recent shootings in the Texas Walmart and the Dayton shooting of August 3, 2019, within a 24-hour period, as the mainstream media is now touting, this article again becomes apropos, and unfortunately it will not be for the last time.

Che Guevara, an icon of the left, thought that socialism and egalitarianism would create a “new socialist man” dedicated to the common good without the need of material incentives to work and live. Che lived long enough to see it did not, although he persisted. Socialistic policies have instead created deranged individuals who resent the success and blame others for their failures, and at some point become killers.

It does not bode well for us as a society that we have a broken criminal justice system with revolving prison doors that panders to criminals and forgets the victims. We have the popular culture of Hollywood, which led by producers like Harvey Weinstein and actors like Kevin Spacey, glorify antiheroes. We have a mainstream liberal press that sensationalizes crime and grants celebrity status to mass killers, while it has moved so far to the left that it has become a propaganda organ of the Democrat Party. It glorifies sex, vulgarity, and violence, and then clamors for gun control and not crime control. And if the popular culture glorifies antiheroes, the media sensationalizes mass murder: Every shooting rampage is supposedly the “worst case of a single shooter in the workplace” or the “deadliest case of multiple shooters in a school place incident,” or some variation thereof.

So deranged killers end up with various motivations, from psychopathic hatred in their hearts to competing with each other for sociopathic ghastly notoriety. Some of us outraged by the heinous acts sometimes also get caught in the sensationalizing and only come to our senses when out of the mayhem the media suddenly calls for more gun control. One journalist even called for gun control after the Halloween New York truck terror attack!

It does not bode well that the socialistic egalitarian ethos promulgated by the liberal press, the progressive academic establishment, and the popular culture, has so permeated our society that when borderline individuals and outright malcontents, are not able to reach for the stars and succeed to the grandiose dreams promised them by the intelligentsia, they blame society and seek deadly revenge in others.

Men have been told they are equal, and because of the limits of public education, the meaning of the phrase has not been explained to them that they are equal in front of the law and in their freedom to pursue happiness, but not in looks, IQ, motivation, intellect, industry, or what they ultimately attain in life. When their great expectations are not fulfilled and their delusions come crashing down, they seek victims because they believe they have been cheated.

So on October 1, 2017 we had the Las Vegas shooting because of a man with the aspiration of being a “successful high-stakes gambler,” turned out to be a loser, who had lost “quite a bit of money on his gambling.”

And on October 31, 2017, we had the Halloween truck massacre in New York City, where an Islamic terrorist plowed into a crowd in the name of jihad and ISIS. Why are we allowing all of these potential and actual terrorists into this country? It is utter madness. We must implement drastic security measures against the enemy so that we can preserve our way of life and freedom. Yet our borders are porous if not wide open, and President Trump is not allowed to exercise his prerogative as commander in chief with his order to ban immigration from countries with strong ties to terrorism in order to safeguard our national security. Not even profiling of potential Jihadists is allowed in our airports or highways because of fear of violating ethnic rights of suspects and other PC inanity. What about the rights of the community and national security?

We have yet suffered another tragic mass killing: A young man dressed in black and armed with a Ruger AR-556 rifle entered the First Baptist Church in Sutherland Springs, Texas, on November 5 and opened fire killing 26 people and wounding 20 other parishioners. No one who was at the church was untouched by death and destruction. The gunman fled the church but was pursued by two armed citizens. Thankfully those two Texas heroes (Langendorff and Willeford) ended what could have been a series of massacres by another deranged malcontent.

Why was this man in possession of a firearm? If someone has a military conviction and is dishonorably discharged from the military by US federal law, he forfeits the right to own firearms. In fact the shooter had tried to get a gun license, and the Texas Department of Public Safety denied it. But the Air Force failed to report the guilty verdict to the FBI that would have placed him in the National Instant Background Check System (NICS). So because of the failure to report the system failed once again, despite the $1 billion dollar per year cost, compliments of the American taxpayers.

The mass shooting derangement (MSD) syndrome is a psychopathic-sociopathic character disorder created by the politically correct nonsense and the progressive modern liberalism (socialism) of the last several decades, particularly since the 1990s. Those who survive need to know that they would be prosecuted to the full extent of the law, face capital punishment, or be locked up in a mental facility for life. And if so, they will be stigmatized and studied as the homicidal freaks of nature they are.

I would be remiss if I did not admit to and express openly some feelings of apprehension regarding the fact that after all the figures are analyzed, there might actually be a cluster of increased incidence of mass killings for the year 2017, whether arising from deranged mass killers, jihad-inspired terror, or the political hatred of the left. They are all ramifications of the malignant socialistic, egalitarian ethos that pervades the world and particularly the United States.

There is no doubt in my mind the progressive zeitgeist of the last several decades have contributed immensely to the MSD syndrome: the institutionalization of government dependency; the nauseating and depraved popular culture on TV and cinema, especially the garbage coming from Hollywood; the incitement of the politics of envy and class warfare hatred by political demagogues (constantly underscored and hammered in by the academic establishment and the mass media) — all have been major contributors to this alienation and derangement disorder we see so clearly in America.

All the politically correct nonsense, such as gun free zones, zero tolerance for guns (including, ludicrously, water guns and even pictures of firearms, all banned in schools and which have resulted in young children been suspended from schools) must cease. Demonizing guns, inanimate objects, at the same time that criminals are pandered in the criminal justice system — must stop! More armed good citizens are needed in crowded places, including teachers in schools and ministers in churches.

The nonsense political correctness and the socialization of American culture have to end, or we will all have to be carrying concealed — locked and loaded!

Miguel A. Faria, M.D. is an Associate Editor in Chief in socioeconomics, politics, medicine, and world affairs of Surgical Neurology International (SNI). He is the author of Vandals at the Gates of Medicine (1995); Medical Warrior: Fighting Corporate Socialized Medicine (1997); and Cuba in Revolution — Escape From a Lost Paradise (2002). His website is https://HaciendaPublishing.com.

This article may be cited as: Faria MA. The mass shooting derangement (MSD) syndrome, PC, and the modern liberalism (socialism) ethos that created them! HaciendaPublishing.com, November 9, 2017. Available from: https://haciendapublishing.com/the-mass-shooting-derangement-msd-syndrome-pc-and-the-modern-liberalism-socialism-ethos-that-created-them-by-miguel-a-faria-md/