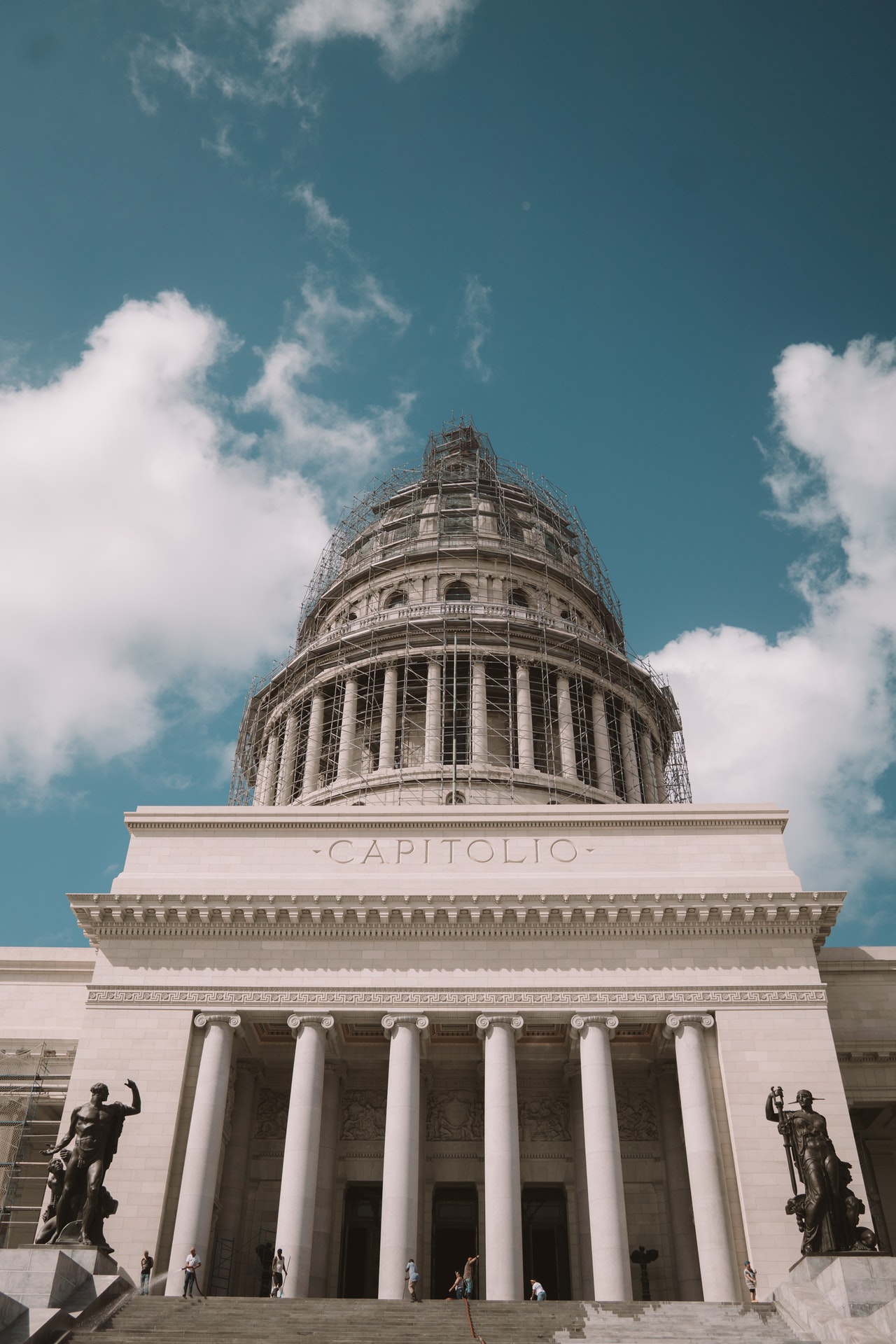 The Fall of Fidel Castro (Part II): A Social(ist) Democracy or a Constitutional Republic for Cuba?

In Part I of this article, we discussed plausible scenarios that could take place in Cuba after the much-awaited death of the tyrant Fidel Castro. After the initial turmoil within the ruling communist ranks and the quiet jubilation inside and outside the island, it is my belief that communism in its autocratic and Stalinist form will utterly collapse and freedom will finally be within reach for my Cuban brethren in the Pearl of the Antilles — if they seize the moment.

But while hard-core communism ultimately will end, there are unscrupulous politicians, businessmen, and internationalists who would want to impose upon Cuba less perceptible forms of socialism, global collectivism, and saddle Cuba with economic policies that may not be most beneficial to the Cuban people.(1,2)

Cubans, while there is still time, need to become informed and vigilant that their future in freedom is not lost. They will need to do so to establish a government for Cuba that is most beneficial to the new nation. In short, they will have to implement with conviction a wise, just and frugal government in which free enterprise can flourish or those in the shadows with an internationalist bent who are in positions of political and economic power will pull the strings to establish socialism and internationalism in Cuba for the benefit of their own agenda.

Cuba should reject socialism in any of its incarnations. Cubans will have to choose between being ruled as a social democracy (democratic socialism) by purported majority rule or being ruled as a constitutional republic under the rule of law. Information then will be liberating. Knowledge is indeed power.

As events unfold, the ultimate question, will be whether a bright future for Cuba lies in a collectivist, social democracy as in Great Britain, Germany, France and the Scandinavian countries, or in an individualistic, constitutional republic, as in the United States and Switzerland.

Some readers here may object: “Switzerland, a republic? Excuse me, but that neutral nation is a direct (mass) democracy where the people have local assemblies where they voice their opinion, and where they are frequently asked to ratify policies passed by the National Assembly!”

It’s because of Switzerland’s ordered liberty, long tradition of freedom and constitutional principles that the Swiss can have within their great republic such deliberation and demonstrative expression of self-governance. Still, the Swiss, like the Americans, have political rights, inalienable individual rights that no majority rule or government can take away! I will come back to these inalienable principles soon enough.

During the Cold War, we had two Germanys — one was a federal republic (West Germany); the other, a democratic republic (East Germany). Many Germans died trying to escape over the Berlin Wall attempting to escape from one form of government to the other. Guess in which direction the people moved to attain liberty?

In Cuba, Fidel Castro also claims to give the Cubans democratic rule and insists that the vast majority of Cubans support his “presidency.” Many American journalists such as CBS anchorman Dan Rather support that point of view and overtly admire the Maximum Leader, whom Rather respectfully calls, “Mr. President,” with more respect, in fact, than he extended in 1988 to Republican Vice President George H.W. Bush, when the elder Bush was campaigning against Michael Dukakis. You get my drift.

Illustrative examples of how the United States functions as a constitutional republic rather than a democracy were shown in reference to the political scandals of Democrat President Bill Clinton and the impeachment proceedings during 1998-1999, and in the presidential election contest in the fall of 2000.

The fact is that during 1999, many Republican legislators were reluctant to speak out against Clinton because of his popularity and his high approval ratings, despite the scandals. With his popularity ratings hovering over 60 percent, conservative politicians feared the wrath of the voters, particularly soccer moms and other women, who were said to be enamored of the gregarious Clinton. Had the U.S. been a direct or even a parliamentary democracy, surely the president push came to shove would have won the required 51 percent majority in any popularity contest and would have quickly been exonerated of whatever misdeeds he had committed.

But it wasn’t so. Being a republic governed by the rule of law, despite his popularity and job approval ratings, Clinton was impeached in the U.S. House of Representatives for perjury and abuse of power in the sex-escapade scandal.

While democracies rely on people’s rule by simple majority and thus are subject to the passions of the moment and the incitement those passions can in turn arouse in the populace, constitutional republics follow written rules that apply to all citizens equally. Constitutional governance provides safeguards that protect the rule of law and ordered liberty.

For example, republics may have special provisions for the election of leaders, which, while based on “democratic” principles of representation, may supercede outright direct voting by the people. Although Democrat Al Gore may have won the popular vote, Republican George W. Bush ended up winning the election, because he won where the U.S. Constitution says the candidate should win, in the Electoral College, which provides for more equal representation of the states in the American confederation of the United States.

The U.S. Founding Fathers created for Americans a constitutional republic at the Constitutional Convention in Philadelphia in 1787 after the defeat of the British army after the American Revolution. The American Founders, George Washington, Thomas Jefferson, James Madison, Ben Franklin and other patriots rejected direct democracy as a government subject to mass demagoguery, government not by the judicious rule of law, but by the capricious rule of man.

James Madison, the Master Builder of the Constitution, wrote, “A pure democracy can admit no cure for the mischiefs of faction. A common passion or interest will be felt by a majority, and there is nothing to check the inducements to sacrifice the weaker party.

Hence it is, that democracies have ever been spectacles of turbulence and contention; have ever been found incompatible with personal security or the rights of property; and have, in general, been as short in their lives as they have been violent in their deaths.” Fisher Ames, a Massachusetts representative in the first U.S. Congress, passionately argued that “Democracy is a volcano, which conceals the fiery materials of its own destruction.”

So when the Founding Fathers drafted the American Constitution they incorporated the thoughts of Scottish professor Sir Alex Fraser Tytler (1714-1778) of the University of Edinburgh, “A democracy cannot exist as a permanent form of government. It can only exist until the voters discover they can vote themselves largess from the public treasury. From that moment on, the majority always votes for the candidates promising the most benefits from the public treasury, with the result that a democracy always collapses over loose fiscal policy, always followed by dictatorship.” And so have empires such as the Empire of Japan, the U.S.S.R., Mussolini’s Fascist Italian Total State, and other governments come and go, but the great U.S.A. is still here, still a beacon of freedom in the world.

And so, in addition to establishing an Electoral College, rather than the popular vote of president and vice president, the Founding Fathers also placed a series of checks and balances in the U.S. Constitution to prevent tyranny any one branch of government over the other, or a tyranny of the majority (mob rule).

They established, for example in Article V, two exacting processes for amending the Constitution, including the requirement of two-thirds congressional majority and three-fourths state ratification majorities, rather than simple majorities; treaties approved by two-thirds of the Senate; impeachment by majority vote in the House of Representatives but conviction by two-thirds super majority of the Senate; the power of the veto in the hands of the president that can only be overwritten by two-thirds of both houses of Congress, etc.(3)

First, it has been because of the wisdom of the U.S. Founders in establishing a representative constitutional republic, rather than a mass democracy, that these United States have been blessed with the freedom and prosperity that is the envy of the world. It’s precisely because of the American Constitution with its checks and balances, separation of powers, provisions for limited governance (with protection for individual rights), and (indirect) representation — including an Electoral College for the election of president and vice president — that we have enjoyed fruits of political stability and economic prosperity, almost uninterruptedly, for 200 years.

Other types of government — “people’s republics,” social democracies, and dictatorships of majoritarian or oligarchical leanings — have come and gone, blown by the winds of instability, oppression and/or economic failures. Not so for the American Constitutional Republic, it has grown strong, navigating steadily though rough seas while the governments of other nations wrecked and perished.

The American Founding Fathers chose this type of government because of their vast knowledge of history, philosophic consideration, and almost instinctively, because they also understood unchanging human nature.

In their wisdom and their appreciation of history (particularly their expressed knowledge of the events leading to the fall of Athenian democracy and the disintegration of the Roman Republic, which had after nearly five centuries fallen prey to demagoguery and had degenerated into mobocracy), the U.S. Founders gave Americans a representative government, enshrined in a constitutional republic that has been resilient, enduring and tested.(4) Cubans pay close attention to this great display of wisdom and take notice.

In 1787 when the Framers finally completed the Constitution, it was — and remains — the greatest document ever drafted for self-governance, written by the heart and minds of men but inspired by the wisdom of the ages, if not the hand of God. When a woman asked Benjamin Franklin, what kind of government have you given us? He replied judiciously, “A republic, Ma’am, it you can keep it.”

Let us hope Cuba can establish one very soon with a worthy constitution. We will continue in Part III of this article with a discussion of natural rights theory, which is essential for constitutional governance.

Miguel A. Faria Jr., M.D., is editor-in-chief of Medical Sentinel of the Association of American Physicians and Surgeons (AAPS), author of “Vandals at the Gates of Medicine” (1995) and “Medical Warrior: Fighting Corporate Socialized Medicine” (1997), and a contributor to NewsMax.com and LaNuevaCuba.com. Advance copies of his upcoming book, “Cuba in Revolution: Escape From a Lost Paradise,” will be available this fall. Web site: https://HaciendaPublishing.com.

This article may be cited as: Faria MA. The Fall of Fidel Castro (Part II): A Social(ist) Democracy or a Constitutional Republic for Cuba? NewsMax.com, July 6, 2001. Available from: https://haciendapublishing.com/the-fall-of-fidel-castro-part-ii-a-socialist-democracy-or-a-constitutional-republic-for-cuba/.