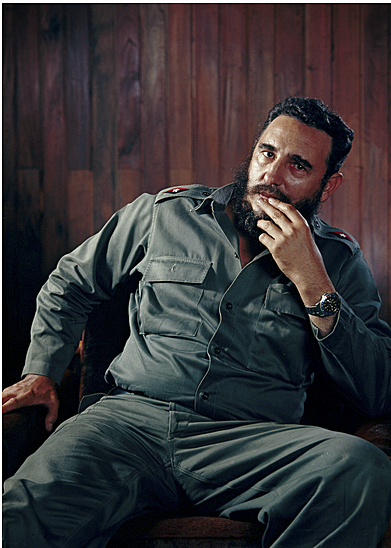 The Fall of Fidel Castro (Part I): Death of the Maximum Leader

A series of incidents in the last several weeks suggest that Cuban Maximum Leader Fidel Castro’s physical and mental health may be in rapid decline. On June 23, 2001, Castro nearly fainted while delivering a speech in El Cotorro, near Havana. Cuban security agents had to assist him at the podium and kept him from falling to the ground. The incident was caught on camera and shown live in Cuba, and subsequently the taped incident was viewed in Miami. Last April, the Cuban tyrant lost his train of thought while delivering a speech commemorating the Bay of Pigs invasion. In that speech, he fumbled through papers, unable to locate some pieces of information. In another incident, he went blank in front of television cameras in the municipality of Las Palmas in Pinar del Rio.

Many informed authorities believe the death of Fidel Castro will rapidly precipitate the downfall of communist tyranny in the Caribbean Island. Fidel and his brother Raúl assert that communism will survive them.

What follows is Part I of a four-part article that first appeared in LaNuevaCuba.com between March and May 2001. The articles describe what may happen in Cuba once Castro is out of the picture and what form of governance is likely to be established in the post-Castro Cuba.

This past March, Fidel Castro spent five hours with U.S. media moguls and reporters from the New York liberal daily Newsday at the festive opening of the Tribune Co.’s bureau in Havana. The Tribune Co. is the first U.S. newspaper chain to open a bureau in Cuba.

NewsMax.com reported: “While acknowledging that he has been using capitalist tools such as encouraging foreign investors to finance luxury hotels and resorts in order to help pump up Cuba’s sagging economy, Castro bragged that Cuban socialism will survive both the infusion of capitalism’s money and his own death.

“‘No one would be able to change the line of the revolution because that is what the people believe in — in the same way that the pope couldn’t turn his followers into Muslims,’ Castro boasted to the newsmen.’

“Asked by Tribune CEO John Madigan what will happen in a post-Castro Cuba, Castro replied that despite the flow of dollars coming into Cuba’s resort industry, the ideals of the revolution — especially its socialism and nationalism — will survive.”(1)

In the compelling epilogue to his 1999 book, “Viaje al Corazón de Cuba,” the eminent journalist Carlos Alberto Montaner describes a hypothetical but plausible ending to the regime of Fidel Castro after the sudden, but not completely unexpected, death of the Maximum Leader.(2)

In addition to Castro’s common-law wife, Delia del Valle, three of his children, as well as his brothers Raúl and Ramón, a number of the regime’s important personages gathered. Dr. José Machado Ventura (Communist Party chief), Gen. Julio Casas Regueiro (military follower of Raúl Castro), Juan Almeida (Council of State), Carlos Lage (Council of Ministers), Eusebio Leal (Havana historian), as well as Ricardo Alarcón, speaker of the rubber-stamping Cuban National Assembly, and Abelardo Colomé Ibarra, the dreaded head of the Ministry of the Interior, were all there.

The communist dignitaries, now under Raúl Castro, will not only carry out the previously planned funeral arrangements but will also decide the fate of the country — for once, without the guiding, iron-fisted hand of Fidel Castro.

In this hypothetical situation, Raúl Castro solemnly declared, “Fidel ha muerto,” and immediately gave the order to proceed with “Operation Alba,” the plan to crackdown on potential counterrevolutionaries, including errant military, and maintain political and military control over the island.

I will not reveal all of the interesting twists and turns that take place as the scenario unfolds. Montaner develops the chapter into an intriguing, non-stop, cliffhanger. You will have to read his book to find out the interesting details. Suffice to say, with the death of the Maximum Leader, Cuba, in Montaner’s scenario, would move toward “democracy” with private property rights and free market reforms. Everyone lives happily thereafter — Era como volver a nacer.

Perhaps after the death of the communist tyrant, Cuba’s immediate future will be as rosy as described in Montaner’s book. Maybe not. In an Internet article, “La Caida de Castro” (Castro’s Fall), Rafael Coutin does not foresee such an immediate rosy outcome.

He writes that Castro is already falling and that Raúl Castro, idolater of his brother, obsessive and sanguinary and unable to rule on his own, will likely usher in a transient but brutal repressive regime with the assistance of MININT and Gen. Abelardo Colomé Ibarra. This repression, in turn, will lead to a popular uprising that “with violence will sweep all the vestiges of Castro communism.”(3)

Coutin’s scenario is supported by Raúl Castro, who, in a threatening tone, told a television audience, “It would be in imperialism’s interest to try, with our irreconcilable differences, to normalize relations as much as possible during Fidel’s life.”

In other words, Raúl seconded Fidel’s assertion that Cuban socialism (communism) will remain in Cuba, and it would be even harder for the U.S. to deal with him than with Fidel.

Never mind that communism has been discredited worldwide, and, except for the redoubts of North Korea and Red China, it’s recognized as an inimical philosophy, a philosophy that is only defended in the bastion of the ivory towers of U.S. academia, and, perhaps under other euphemisms, in the chambers of the Council on Foreign Relations,(4) and the Progressive and Black Caucuses of the U.S. House of Representatives.(5)

Be that as it may, communism will sooner or later end in Cuba, but not necessarily the other less perceptible forms of global collectivism.

Today, the less perceptible forms of collectivism and authoritarianism are masqueraded in the more acceptable form of social democracies or democratic socialism. Because of the profound bankruptcy of overt communism and collectivism in any of its incarnations, lip service is paid to the “global economy” and the internationalism of the United Nations; but it all amounts to socialism and corporativism, other forms of collectivism, so identified by the great Austrian free market economist, F.A. Hayek.

It behooves those who care about the beautiful Caribbean island, the Pearl of the Antilles, and the new generation of Cubans both in and out of the island, to do our utmost to prepare ourselves to pave the road to individual freedom in the bright future of a free Cuba.

Because Cubans still in the island have been deprived of sources of information, it’s difficult for them to learn and prepare themselves for the aftermath of Castro’s death. In Cuba, independent librarians have been persecuted and private internet use forbidden.(6) So, those of us living in freedom have a Herculean task ahead of us. Knowledge is power. Despite the Castro brothers, communism will not survive Fidel for long!

The question, as we will answer in Part II of this article, is whether the future of Cuba lies in a collectivist social democracy, as in present-day Great Britain, Germany and the Scandinavian countries, or in an individualist constitutional republic, as in the U.S. and Switzerland.

Miguel A. Faria Jr., M.D., is editor-in-chief of Medical Sentinel of the Association of American Physicians and Surgeons (AAPS), author of “Vandals at the Gates of Medicine” (1995) and “Medical Warrior: Fighting Corporate Socialized Medicine” (1997), and a contributor to NewsMax.com and LaNuevaCuba.com. Advance copies of his upcoming book, “Cuba in Revolution: Escape From a Lost Paradise,” will be available this fall. Web sites: https://HaciendaPublishing.com.

This article may be cited as: Faria MA. The Fall of Fidel Castro (Part I): Death of the Maximum Leader. NewsMax.com, June 28, 2001. Available from: https://haciendapublishing.com/the-fall-of-fidel-castro-part-i-death-of-the-maximum-leader/.