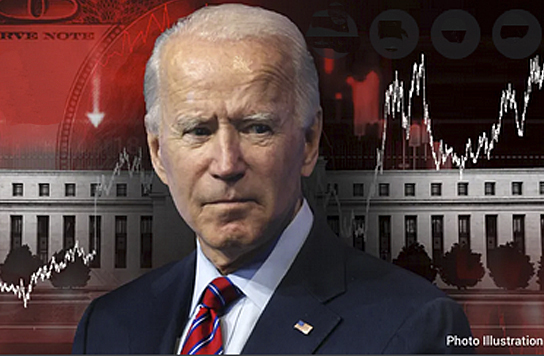 The poll numbers are looking great for the Republican Party. After seventeen months of the toxic Biden agenda, Americans are upset and taking out their anger on the Democrats. According to a CNN analysis, the Republicans are in the “best position…at this point in any midterm cycle in over 80 years.”

Why are the American people so upset at Biden and the Democrats? When Biden was inaugurated, the economy was on the upswing from the depths of the pandemic and gasoline prices averaged $2.39 per gallon nationally.

Under Biden, gasoline prices have skyrocketed, reaching new records daily. The price has more than doubled since his presidency began. These increases have been driven by foolish energy policies such as canceling the Keystone XL pipeline, removing tax incentives for oil and gas producers, and issuing a moratorium on new federal drilling leases.

Under President Donald Trump, the country was energy independent, but after seventeen months of the Biden administration, America is once again dependent on oil and gas imports from foreign countries. It has become so pathetic that Biden is considering a trip to Saudi Arabia to beg their authoritarian regime to increase their oil production.

Overall, inflation is surging, reaching a four-decade high, easily outpacing whatever minor wage growth Americans are receiving. This tax on working class Americans is forcing people to increase spending on credit cards and withdraw precious funds from their savings.

For most Americans, their number one investment is their home; however, with interest rates climbing, mortgage rates have started to increase, and the overall real estate industry is suffering. The stock market has not been a much better investment in recent months as investors have been nervous about the state of the overall economy.

There are plenty of other problems that plague the Biden administration. Most importantly, our southern border is wide open and millions of illegal aliens are pouring into the country. These illegal immigrants are coming from countries all over the world and among the throng of new arrivals are criminals and, potentially, terrorists.

During the Biden presidency, violent crime is on the upswing in urban areas around the country. Sadly, drug overdose deaths are setting new records, thanks to the influx of fentanyl coming across the southern border.

Despite the “green” rhetoric and the constant mention of electric cars, windmills and solar panels, the American people will continue to suffer significant economic harm. These “green” solutions are long term, if ever, and will not help American families who are currently struggling.

Unfortunately, President Biden refuses to be truthful with the American people. He will not accept blame for this crisis. Thus, some of his administration officials are “falling on the sword” for him.

Most prominently, Treasury Secretary Janet Yellen has offered numerous apologies for her misstatements about the threat of inflation. Last year, she boasted that inflation was only “transitory” and would not be a long-term problem for the American people. With the horrible economic numbers. Yellen has been doing numerous interviews to admit she was wrong, but ultimately linking the problem to new COVID-19 variants and the Russian invasion of Ukraine.

The real cause of this inflation, which looks long lasting at this point, is the President’s unwavering commitment to socialism and the cult of climate change. He will not adjust his economic or energy policies, so the game plan for Democrats from now until the midterm elections is to shift the blame for the economic disaster and try to distract the American people.

Here are some of the Democratic Party’s strategies to prevent an electoral bloodbath in the November midterm elections:

Over the next few months, the Democrats will use every political trick in their arsenal to hold on to power. They know the stakes are high, for if Republicans can win control of Congress, hopefully, some sanity will be restored, and the tables can be turned on the party that is working overtime to destroy our country.