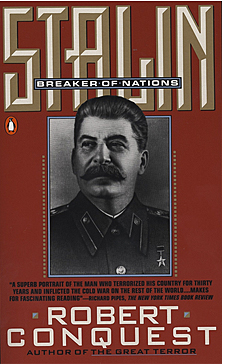 Stalin: Breaker of Nations by Robert Conquest  (1991) covers the life of Joseph Stalin, from his childhood in Gori to his death at his Nearer dacha (Kuntsevo) near Moscow on March 5, 1953. This book is 346 pages, including bibliographical notes and index. The book is easy to read, well-organized, and ideal for the beginning student of Soviet history and Stalinism. It contains two sets of photographs that put faces on the victims of Stalin, adding tangible personification to the almost surreal sense of totalitarian horror, i.e., socialist terror incarnate!  Consider the photograph in the book of the seven Bolsheviks elected to the Politburo in 1924 after Lenin’s death;  six — i.e., Kamenev, Zinoviev, Bukharin, Trotsky (killed with pick axe), Rykov, and Tomsky (possible suicide) would be killed (four shot) by the remaining one, the strongest hyena of them all, Stalin.

Through the sequential Congresses of the Party, we can follow Stalin’s career as he ascends the levels of power with words and deeds, until he reaches the zenith of despotic, autocratic, and absolute power, and then the Congresses cease convening. Stalin rules with his inner circle, his minions who cajoled but also feared him.

After the Party Congress of 1934,  “the Congress of Victors,”  his triumph was complete. He then used the assassination of Georgi Kirov in Leningrad as an excuse to launch the Great Terror of 1936-1938, despite the fact his power was now unchallenged. Millions perished, starved to death in government planned famines, shot, or worked to death in the gulag labor camps.

Conquest writes, “In the early summer of 1918, the Bolsheviks moved into a ‘socialist phase,’ with nationalization, food requisitioning and all the other dictatorial measures later described as ‘War Communism’ — though at the time clearly presented as the fulfillment of the party’s long term aims.” Only popular opposition and peasant rebellions forced Lenin to temporarily change course with the New Economic Policy.  Without exception all of the Bolsheviks  — i.e., Lenin, Trotsky, Kamenev, Zinoviev, Bukharin, Sverdlov, Ordzhonikidze, etc., had condoned violence and terror against the enemies of the Revolution, real or imagined. What separated Stalin from the rest was that Stalin would use terror indiscriminately, as a matter of course, against the population, not sparing the families of his political opponents (not even his own), but most ominously against his former comrades without flinching.

Joseph Conrad’s observation is valid: “Hopes grotesquely betrayed, ideals caricatured — that is the definition of revolutionary success,” for all of Soviet history: Stalinism was only worse. And yet, there were other examples of socialist and communist horrors — e.g., , Red China under Mao Zedong and Cambodia under Pol Pot, and there were others.

But the caricature worsens, and desolation, cruelty, and death follow in the path of “building socialism,” a path that began, not with Stalin but with Lenin, and was asserted at various points of the revolution by Trotsky (who crushed the Kronstadt rebellion without mercy) and most of the other Bolsheviks, including “the darling of the party,” Nikolai Bukharin.

A very critical stage for Stalin’s career, even his political survival, took place in the years 1922 to 1924, when Lenin, very ill and partially incapacitated, finally recognized Stalin’s boundless cruelty and unquenchable thirst for personal, political power. Stalin had even insulted Nadezdha Krupskaya, Lenin’s devoted wife, but it was too late. After Lenin’s stroke of March 7, 1923 until his death in January 21, 1924, Stalin’s career hung in the balance, but his political opponents, like Lenin, had underestimated him.

After the Party Congress of 1924, and despite the implied suggestion of what Bukharin called “the theory of sweet revenge, ” as we have seen, Stalin did not relax. He admitted to his Cheka Chief, Feliks Dzerzhinsky, and Politburo member, Lev Kamenev, “To choose one’s victims, to prepare one’s plans minutely, to slake an implacable vengeance, and then go to bed…there is nothing sweeter in the world.” And he was able to do this repeatedly and with tremendous precision, through to his anti-semitic campaign against alleged “Cosmopolitanism,” and the Doctors’ Plot Affair, two decades later up to the eve of his death in 1953. This book tells you all about it.

Miguel A. Faria Jr., M.D. is the author of Cuba in Revolution: Escape from a Lost Paradise (2002) and the essays, Stalin’s Mysterious Death (2011) and Stalin, Communists and Fatal Statistics (2011)

This article may be cited as: Faria MA. Stalin: Breaker of Nations. HaciendaPublishing.com, December 26, 2012. Available from: https://haciendapublishing.com/stalin-breaker-of-nations/.