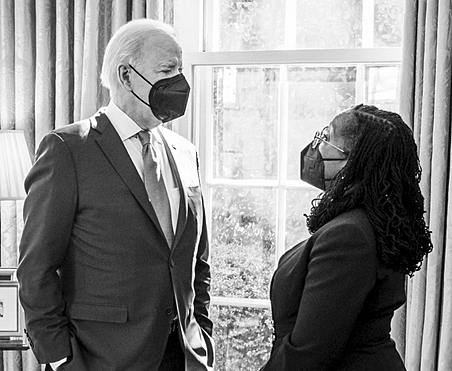 President Joe Biden has failed to deliver on my promise to unify the country or restore our reputation abroad, but he did follow through on his commitment to nominate an African American woman to the United States Supreme Court. In the middle of an international crisis he exacerbated, Biden announced his selection of Ketanji Brown Jackson, a far-left judge with an atrocious record on the bench.

As Biden promised, Jackson was nominated due to her gender and race, not her judicial qualifications. This decision perverts the entire Supreme Court nomination process. Instead of choosing the best qualified nominee for the most important court in the country, a selection was made due to a judicial affirmative action process and to satisfy a perceived need for a racial and gender quota system on the Supreme Court.

Jackson is a Democratic Party activist masquerading as a judge. Even NBC News admitted that Jackson “fits well (with) the progressive movement’s agenda.”

According to the Washington Free Beacon, prior to the start of her judicial career, Jackson served as a lawyer for several suspected terrorists, including a Taliban intelligence officer, imprisoned at Guantanamo Bay. Jackson’s support of her clients was described as “ideological cause lawyering, even in her capacity as a public defender. At times, she flirted with unsubstantiated left-wing theories that were debunked by government investigators. On other occasions, she accused Justice Department lawyers of egregious misconduct with little evidence.”

To bolster her left-wing credentials, Jackson filed an amicus brief on behalf of the National Association for the Repeal of Abortion Laws (NARAL) and other “pro-choice” groups in the McGuire v. Reilly case. In her brief, she described pro-life activists who protested outside of abortion clinics as “hostile” agitators who subjected women to a “gauntlet” that was like “labor picketing.”

With her progressive credentials established, Jackson was nominated in 2012 by President Obama for a position on the U.S. District Court in D.C. The following year, she was confirmed by a unanimous voice vote of the U.S. Senate. Obviously, the Republican Senators who supported Jackson either did not research her record or did not care about her liberal activism.

In her eight years as a Judge for the U.S. District Court in D.C., Jackson’s decisions were often supportive of Democratic Party politicians or liberal causes. For example, in 2015, she ruled that a Hillary Clinton aide, Philipe Reines, was justified in using a personal email account for work related activities.

Often, her partisan decisions were overruled by the liberal U.S. Court of Appeals for the D.C. Circuit. In 2019, Jackson ruled that the Trump administration infringed upon the rights of federal employees to collective bargaining. The appellate court unanimously ruled against Jackson, noting that she did not have jurisdiction in the case.

In another instance in 2019, the D.C. Circuit overruled Jackson in a case involving a decision by the Department of Homeland Security (DHS) to expand the definition of non-citizens. The higher court ruled that Jackson could not rescind this order because the Administrative Procedure Act gave the DHS the required authority to make the decision.

The D.C. Circuit also overruled Jackson’s decision that compelled former White House Counsel Don McGhan to testify before the House Judiciary Committee, which was investigating “meddling” in the 2016 presidential election. In her decision in the case, Jackson used “political” language to denounce President Donald Trump. She wrote that “presidents are not kings.”

In contrast, Republican Supreme Court nominations are often forced to undergo an intense and unfair nomination process. One of the most respected judges in American history, Robert Bork, was rejected by the U.S. Senate after his outstanding record was intentionally misconstrued by Democrats, including Joe Biden, who served as Chairman of the Senate Judiciary Committee.

Senate Democrats gave the worst treatment to Trump Supreme Court nominee Brett Kavanaugh. In his confirmation process, Democrats participated in a disgusting attempt to destroy his reputation by highlighting disputed allegations of inappropriate behavior during his college years. The Senate eventually approved Kavanaugh by an extremely close vote, but only after he was brought to tears and his reputation was shattered.

Republicans should not participate in the same underhanded tactics as the Democrats in the Jackson nomination process. However, they should seriously examine her pathetic record and her liberal activism.

Biden’s selection and the process he used should be vigorously challenged by every Republican in the U.S. Senate. Unfortunately, if history is any guide, many moderate Senate Republicans may refrain from criticizing Jackson due to her gender and race. However, if that is the case, such easy treatment is the epitome of racism. She should be held to the same exacting standards and the same questioning as every other Supreme Court nominee.

Based on her record and not the “politics of personal destruction,” every Senate Republican should easily reject Jackson. Along with her history of progressive activism and her record of being overturned by higher courts, Jackson has only served on the D.C. Court of Appeals for a mere eight months, which indicates that she does not have adequate judicial experience for the Supreme Court.

The Republican National Committee (RNC) will “fight this politicized appointment every step of the way,” according to Chairwoman Ronna McDaniel. Let us hope Senate Republicans display the same fighting spirit during the confirmation process.