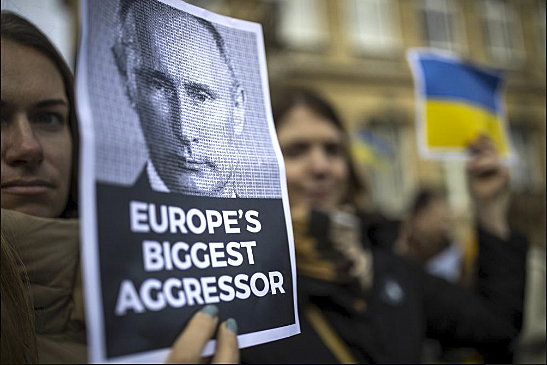 The Empire Strikes Back: Questions, but not many answers — only historical examples by Douglas P. Harden

Why has Russia lashed-out and invaded Ukraine? What does Vladimir Putin need in Ukraine that he cannot get in his own country? Is this an attempt by a Russian autocrat to resurrect the Soviet empire? Many people believe the hammer and sickle of socialism, communism, and totalitarianism perished with the fall of the Berlin Wall and the break-up of the former Soviet Union. Is Vladimir Putin a wolf in sheep’s clothing?

Will communism be resurrected? Many people think not since the freedom genie got out of the bottle at the end of the Cold War. Are we witnessing fascism again like we did in the run-up to World War II? Hitler annexed and invaded Poland and France, before the other countries could blink. Hitler was maneuvering to control Europe. Is Putin taking a page from Hitler’s playbook? Yesterday Crimea, today Ukraine, and tomorrow: Who else?

These questions lead scholars and experts to assess Putin’s motives and reasons for the invasion as distorted rationale, at a minimum, if not almost suicidal. Putin’s actions have caused international isolation, condemnation, and military action and intervention from other countries and potentially international organizations such as NATO. The United States and other nations have imposed economic sanctions — a textbook approach to a bad international actor but something that rarely affects the actions of a despot in a positive manner. The United States imposed many economic sanctions on Fidel Castro and the Cuban government for decades and got little, if any, change in behavior from Cuba. Sanctions usually hurt the populace of a country more than its leaders.

Scholars and experts have postulated recently that two avenues may materialize as a result of Putin’s actions. The first, his invasion of Ukraine might start World War III. The second, Putin may not be able to hold on to power and may be deposed. Which outcome is worse? The second outcome, Putin losing power, may cause a major war — the potential first avenue outcome. If Putin moves against NATO allies in the region, does this set off a foreign policy entanglement like we witnessed during the Cuban Missile Crisis? The United States will be obligated to defend NATO and Russia may see this as aggression and decide to continue its reckless conquest of Eurasia.

All peace-loving people and states do not want war or armed conflict. This is not the first power-grab or land-grab by Vladimir Putin. In 2014, he annexed the Crimea — an illegal incursion by a government that has recently shown little regard for international law and state sovereignty. Now, eight years later, he orchestrated a full invasion of Ukraine. Thanks to the tough foreign policy approach of President Donald J. Trump, Putin halted his rash land-annexation of former Soviet satellite states during the Trump administration. Does Putin see weakness in Democratic administrations?

There are more questions to ask:

Are there answers? We don’t know. As for now, we can only speculate.

Those of us in the United States can only hope that the foreign policy of President Biden is up to the challenge. While it is relatively untested, Democratic administrators tend to shy away from military intervention and the use of force on a large scale. Will this foreign policy approach be a 21st century replay of the lead-up to World War II? Are we seeing a “Betrayal of Munich” again? President Biden, Defense Secretary Austin, and Secretary of State Blinken have a major, complex problem on their hands. NATO, Putin, sovereignty, sanctions, international outrage, diplomacy, and human rights have all converged into the biggest foreign policy test in the last twenty years. Appeasement only strengthens the aggressor.

As President Reagan once told us, “There is no security, no safety, in the appeasement of evil.” He also warned us about the impulses of the “evil empire” — the Soviet Union.

The foreign policy strategy of the United States must not be one of appeasement. It must be peace through strength. It must be for strong civil society via the rule of law, liberty, free markets, and robust human rights.

Vladimir Putin must be “dispatched to the ash-heap of history,” and the United States needs to adopt a foreign policy strategy that achieves and sustains broad US interests while punishing regimes like Putin’s and simultaneously bolstering budding democratic states.

This article may be cited as: Harden DP. The Empire Strikes Back: Questions, but not many answers — only historical examples. HaciendaPublishing.com, March 3, 2022.  Available from: https://haciendapublishing.com/the-empire-strikes-back-by-douglas-p-harden/.