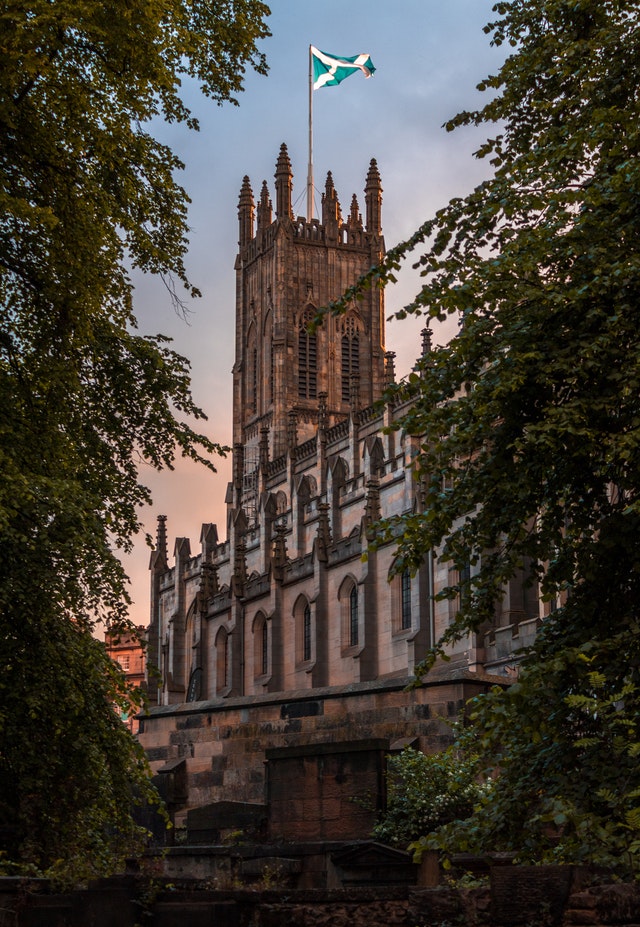 Scotland and Britain and the historic referendum for Scottish independence — a disinterested view from afar by Miguel A. Faria, MD

After a highly charged two-year campaign, the Scottish people have spoken, and the final vote and tally completed. On September 18, 2014, Scotland voted on the issue of Scottish independence in a massive referendum. The result being that Scotland would stay within the United Kingdom after all — rejecting, by a decisive vote, the call for independence: 2,001,926 citizens cast a No vote; 1,617,989, a Yes vote. In political concessions, Britain will be devolving more powers to Scotland and the Scottish Parliament, particularly in taxes, spending, and welfare.

British Prime Minister David Cameron says now it is “time to move on” and breathed a sigh of relief at the electoral victory! It had been a rough ride for the Prime Minister as well as for British Labor Leader Gordon Brown, who had campaigned extensively for a No vote. Scottish National Party (SNP) leader and Scotland’s First Minister, Alex Salmond, who had been a lightning rod inciting for Scottish independence and who headed the movement, announced that he would step down as First Minister, nevertheless vowing that, “For Scotland, the campaign continues and the dream shall never die.”(1)

But what is the dream? Since 1707, when Scotland joined England and Wales in the island of Great Britain, the glory of the British Empire has reflected on the two nations forming the United Kingdom along with Northern Ireland. Thus endowed Britannia ruled the waves in an unprecedented global empire where the sun never set.

True, before the union of the two kingdoms was established, there were more than rumors of wars, savage and historic battles were fought between the two kingdoms. English warrior King Edward I, aka Edward Longshanks, (r. 1272-1307) not only subdued Wales but was also called “the Hammer of the Scots,” for repeatedly humbling Scotland. Nevertheless, his dissipated son Edward II (r. 1307-1327) was drubbed by King Robert the Bruce (r. 1306-1329) and his Scottish warriors at the famous Battle of Bannockburn in 1314. A Scottish Queen, Mary Queen of Scots (1542-1587) was even beheaded by her English cousin the most regal Elizabeth I (r. 1558-1603).

The Scots were intimately involved in the English Civil War (1642-1651), supporting this side or the other at various points. Eventually, it was the Scots who delivered their own Stuart King Charles I (a Scottish dynasty) to his Roundhead enemies. Charles I was subsequently beheaded by the Parliamentary forces of Oliver Cromwell. No such participation was permitted to Irish Catholic subjects, who were treated with contempt before, during and after the English Civil War. Without rights, totally disenfranchised, involvement with Irish Catholics was treasonous. After the Civil War, Irish Catholics were to be treated brutally under the reign of Puritan Oliver Cromwell (1599-1658). With such history of brutality and oppressive disenfranchisement, secession of Ireland from Great Britain was just and inevitable. But the case of Scotland is in a completely different category.

I’m aware of the tragic events that followed the brief but savage rebellion incited in Scotland against British rule by Charles Edward Stuart, aka Bonnie Prince Charlie, who attempted to overthrow the Hanoverian dynasty and replace the Stuart Crown on his own head with the help of the courageous Scottish Highlanders. I am also aware of the disastrous Battle of Culloden Moor in 1745, and the brutality exerted by the Duke of Cumberland in hunting down “the Young Pretender” and his defeated Scots.

A Part of Anglo-American Civilization

But by in large, despite language and ethnic differences far back in history, intense religious differences and conflicts, despairing alliances and bloody wars, as noted above, the Scots and their English neighbors for the most part shared a stressful but largely bearable relationship.

After the Union of the two Kingdoms was officially established in 1707, the relationship blossomed in the eyes of the world. During the 18th century, Edinburgh was a center of learning, medicine, metaphysics, political philosophy, economics, and the rest of the Scotland along with England and Wales, led the world in the Industrial Revolution.

In the 18th and 19th centuries, elite Scottish regiments fought with distinction in the British armies, extending British civilization to the farthest corners of the globe. In the 20th century, Scotland, England and the rest of the British Commonwealth, including Canada and New Zealand, joined America in confronting tyranny and bringing peace, freedom, and prosperity to much of the world.

By the 21st century, Western Civilization led by Anglo-American cooperation and preeminence reached a zenith in prosperity in the history of man. Even as the British Empire receded, friendship with America continued to flourish; the English language remains the lingua franca of the world, and the British pound and the U.S. dollar are still respected currencies. The British economy (entwined with Scotland) ranks sixth in the world. Yet, Anglo-American predominance, relative peace, and aspirations for freedom are being threatened by Islamic terrorism and economic woes. Leadership of the world, particularly in economic and military power is being challenged by Russia, China, India, and other nations, not always friendly to the United Kingdom or America. We are living in dangerous times. It is no wonder that 55% of the Scots wisely opted to remain within the United Kingdom.

In my estimation, as a distant observer, there are possible winners and losers based on the result of this referendum. Who are the winners?

1. Both the Scottish and British people for all the reasons previously alluded to in my narrative, including geopolitics and realpolitik, the worthwhile preservation of historic ties, and most particularly, greater chance presently for economic prosperity in the whole of the United Kingdom.

2. The Labor Party of Great Britain, which has a proportionally greater political support in Scotland, sometimes tilting the balance in the internal affairs of the entire United Kingdom. This explains, at least in part, the herculean efforts of labor leaders, particularly Gordon Brown in lobbying for unity, a “no” vote, in the weeks preceding the historic referendum.

Who are the losers?

1. The SNP and fervent Scottish nationalists, particularly those who aspired to political leadership roles in the new nation.

3. Possibly, British conservatives, whose power will remain diluted, and who may have to yield further in making growing political and economic concessions to Scottish politicians to preserve a workable union.

In Conclusion: What Triggered This Movement for Scottish Independence?

Both the British and the Scots have their own ideas as to what went wrong (or not quite right) in the relationship. From where I stand across an ocean, I smell not only nationalism (and the associated nostalgia for ages past) but also the smell of division, class warfare and the politics of envy fostered by socialism in Great Britain and in Western Europe. There seems to be a general idea that Margaret Thatcher’s conservative government triggered Scottish thought of independence because free market economy went and supposedly goes against the grain of Scotland’s social welfare fabric! But the fact is that had Scotland opted for independence, it would have immediately dropped from sixth to 42nd place in world GDP ranking. As Tom Gallagher wrote in the National Interest, “One of the world’s most extensive public sectors would need to be financed from a tax base of under 4 million people instead of the present 52 million…”(2)

Forty-five percent of Scots seem to have developed a sense of entitlement that goes beyond what they can afford, not unlike the disastrous situation going on in much of Western Europe. Those Scots who voted for independence must realize unrestrained socialism is destroying the Continent and austerity is what is urgently needed. They should feel fortunate that fiscal management by conservative governments in Britain have brought them relative prosperity they would not otherwise have had. The 55% who voted for preserving the union with cooler heads did so wisely. Scotland’s independence could very well have led them the way of Portugal, Italy, Ireland, Greece and Spain (PIIGS), to unrest and misery! Those Scots who desired and may still wish for independence are doing so for all the wrong reasons!

Bluntly speaking, the almost tearing apart of the United Kingdom by Scottish separatists should be a warning of what an unrestrained entitlement mentality can do to the unity of a nation. Although the United States is in no imminent danger of geographical/political divisions comparable to the United Kingdom, the situation there has lessons about what the exuberant growth of the entitlement mentality, socialism, and the welfare state can do to a once proud, heterogeneous nation.

Miguel A. Faria Jr., M.D. is Associate Editor in Chief and World Affairs Editor of Surgical Neurology International. He is a former Clinical Professor of Neurosurgery and Adjunct Professor of Medical History. Dr. Faria is the author of Cuba in Revolution: Escape From a Lost Paradise (2002). He has written numerous articles on the blessings of liberty and the venalities of totalitarianism, collectivism, and communism — all posted at his website: https://HaciendaPublishing.com

Another version of this article without illustrations also appeared in GOPUSA on September 23, 2014.

This article may be cited as: Faria MA. Scotland and Britain and the historic referendum for Scottish independence — a disinterested view from afar. HaciendaPublishing.com, September 22, 2014. Available from: https://haciendapublishing.com/scotland-and-britain-and-the-historic-referendum-for-scottish-independence–a-disinterested-view-from-afar-by-miguel-a-faria-md

2 thoughts on “Scotland and Britain and the historic referendum for Scottish independence — a disinterested view from afar by Miguel A. Faria, MD”