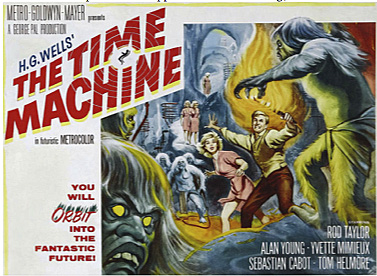 A Nation of Elois? by Miguel A. Faria, MD

In view of the multiple stories about wild hogs rampaging the land and the recent woman killed in Texas by a sounder of wild boars, I think, my classic article from 2014 — on wild hogs (and its observations on the subject)— needs to be re-published.

Hogs Gone Wild (II) in a Nation of Elois!

In the 1960 science fiction film classic, The Time Machine, based on H.G. Wells’ 1895 novel similarly titled, the hero (played by Rod Taylor) travels in a time machine to a distant future, which, at first sight, seems to be a utopia. But first appearances are deceiving, and soon a disconcerting reality becomes evident. The hero observes that the inhabitants of the distant future, the Elois, are effeminate and shallow beings, devoid of feelings or high intelligence, and they neither work nor read books. Civilization has collapsed, books have decayed, cities have crumbled. The Elois live a halcyon and apathetic existence with no cares, duties, or concerns, except for shallow self-indulgence. Food and leisure are provided for miraculously. During the day, the Elois, oblivious of their existence, pass the time in carefree activities, that is until nighttime. At dusk, a siren blares, and the Elois, conditioned by the sound, are herded like sheep to the slaughterhouse, where they are to be consumed, cannibalized by the underground and predatory Morlocks, the other degenerate, surviving human race of the apocalyptic future.

Returning to the 21st century, we find the civilized world in general and our nation in particular assailed by economic and security problems. The United States (and much of the Western world) is at war with a relentless and savage enemy that at this point in the conflict calls itself the Islamic State of Iraq and Syria (ISIS). But we have been at war, lest we forget, since September 11, 2001, when nearly 3,000 innocent Americans were incinerated in a brutal attack that also destroyed the Twin Towers, symbol of American finance, and damaged the Pentagon, symbol of U.S. military power. It has been thirteen years of war against terrorism and as many years of economic woes, not to mentioned six years of geopolitical decline, as China’s economic competition intensified, and Russia’s military resurgence against Georgia, annexation of the Crimea, and dangerous instigation of civil war in Eastern Ukraine, disclosed the weaknesses of America and her allies. It is a dangerous world out there.

At home, the United States, despite changes in the political landscape — i.e., whether Democrats or Republicans hold power in the White House or in Congress — continue to travel down the road of welfarism, socialism, and insidious political correctness. The prevailing liberal establishment incarnated in the mass media, the halls of academia, and the popular culture, continue to hold sway in America. And that is why we remain preoccupied with the fatuous issues they espouse, such as “zero tolerance” in schools, so that children who take toy guns or express Christian beliefs are severely censored or suspended from schools. And yet, bullies, who tow the line of political correctness, are permitted to disrupt and victimize fellow students. The Boy Scouts of America, that taught patriotism, fidelity, honesty, courage, courtesy, and other civil virtues, as well as survival skills in the wilderness, are hounded out of existence because the traditional organization opposes gay (homosexual) counselors. Frankly, political correctness — i.e., the overt or disguised attempt at the systematic promotion of desirable thoughts by the intelligentsia, while censoring the political causes they oppose — has reached the level of dangerous ludicrousness in American society.

The epitome of absurdity has been reached, when, in the face of a determined and barbarous enemy, who brutally kidnaps and beheads journalists, soldiers, as well as the completely innocent abroad (and recently it seems at home), we remain mired in utter vacuity. Consider the situation of the mainstream media, including the evening news spending an inordinate amount of time editorializing, discussing gay marriages, and the life and times of celebrities, best spent with more thorough reporting and informing with objective and unbiased news from around, and increasingly the more complex and dangerous, world.

In tandem with this vacuity of the press, consider the decline in American education as standards continue to drop to the lowest common denominator. More Americans are not only becoming illiterate but more than ever are on food stamps, helpless and dependent on the government for every need, from housing to cell phones. The level of dependence has reached a point that not only individual Americans but also whole communities feel victimized and helpless. Some Americans consider themselves prisoners in their own homes, afraid, not only of rampant crime, fearful of thugs and street gangs, but also feel victimized by hogs, yes hogs, gone wild roaming their neighborhoods! This is no joke. I recently watched a documentary by the Discovery Channel, “Hogs Gone Wild” that is quite disturbing, not only because of the growth in, and the damage caused by, the feral hog population in the United States, but also because of the degree of the unexpected sense of helplessness expressed by those Americans interviewed!

Yes, throughout the United States, many communities, most notably in the Hawaiian islands, consider themselves under siege by feral hogs — hogs that have gone wild — victimizing neighbors, destroying lawns and gardens, scaring children and killing pets. So dependent and helpless some Americans have become that they are afraid to venture outside their own homes at night — for fear of hog attacks! And this is at a time when the price of beef and pork has gone through the roof! Go figure! Have guns become so demonized and hunting so politically incorrect that Americans are afraid to even protect their own private property, while at the same time utilizing a natural resource and procuring another source of meat for their family? Where have the legendary American sense of self-sufficiency and rugged individualism gone?

Perhaps, attitudes are best exemplified by our elected representatives. Russia elected and re-elected Vladimir Putin, a self-defense and nature enthusiast, who mounts and ride horses in the country, and hunts wild animals in the taiga of Siberia. We in the U.S. elected and re-elected Barack Obama, who vacations and plays golf, and more golf, at Martha’s Vineyard!

The photographs used to illustrate this commentary (October 1, 2014) came from a variety of sources and did not appear in the GOPUSA.com article. The illustrations seen here were added to the article for the enjoyment of readers at HaciendaPublishing.com. A shorter version of this commentary was also published in The Macon Telegraph on October 3, 2014, under the title “Hogs gone wild.”

This article may be cited as: Faria MA. Hogs Gone Wild in a Nation of Elois! Hacienda Publishing, October 1, 2014. Available from: https://haciendapublishing.com/a-nation-of-elois-by-miguel-a-faria-md/