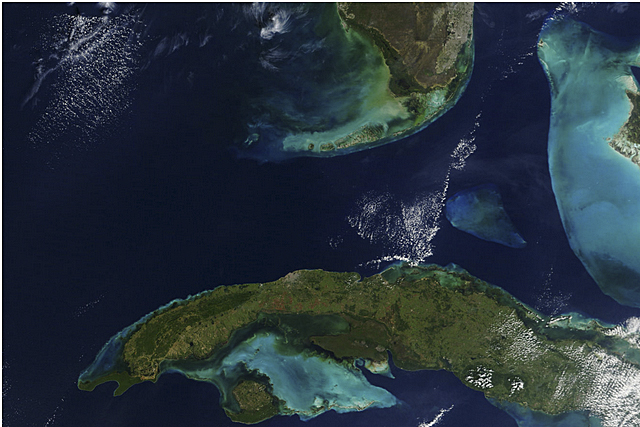 The thorny problem of Cuba, 90 miles from the U.S. coast, refuses to go away. Like it or not, President Bush, like his predecessors, will have to deal with the inherited, persistent problem of the communist Caribbean nation.

It has been said that Fidel Castro’s health is not what it has been in the past, that he has been ill. He looks stiff and morose and smiles little. Indeed, the years seem to be taking a toll on the Maximum Leader. It has been rumored even that the U.S. is postponing the impolitic and ill-advised question of lifting the embargo for Castro’s successor.

In fact, the rumor has reached Havana, and Cuban Defense Minister Raúl Castro, the anointed successor to his brother Fidel, has already declared in an almost threatening tone that in the matter of improving relations, the U.S. had better deal with Fidel.

But there are also strategic reasons, besides moral ones, for not changing our long-term Cuban policy. The Lourdes eavesdropping spy station is still in Cuba and remains operational. As NBC News, in an unusually candid report (12/18/2000) stated, Lourdes is a “listening post in Cuba still crucial to the Kremlin.”

Moreover, the report admitted, it “is the largest and most productive spy station the Russians ever built, a base that specializes in ‘telephone espionage.’ It is the last and most valuable jewel in their electronic crown, the Russian version of ‘Echelon,’ a worldwide spy network.”(1) Yes, indeed. The Cold War might have ended but global competition for commercial interests, industrial espionage, and old-world rivalries die hard.

Lourdes is still operated by Russia’s military intelligence, GRU, and this is troubling because in recent months Russian President Vladimir Putin has vowed to re-establish close ties with Cuba. Indeed, in a recent joint communiqué, Putin and Fidel Castro remonstrated against the U.S. government’s “excessive” global influence, and pleged to oppose it.

Other national security problems for the U.S. remain with the thorny Cuban problem. There is, for example, Cuba’s strategic submarine naval base in Cienfuegos and the Juraguá, a Chernobyl-like facility, poses an environmental threat, and remains an ecological nightmare waiting to happen — particularly since 1997, when the Russians admitted to the U.S. that they intended to continue working on that facility at least until the project had been completed.(2,3)

The strategic naval base is now as much as ever a threat to the U.S. from a naval standpoint, given the fact that Red Chinese, not the U.S., now control the ports at both ends of the Panama Canal — Cristobal on the Atlantic and Balboa on the Pacific end. Yes, we built the Panama Canal early in the 20th century with American sweat, toil and fortune, only to give it, via a dubious treaty last year, back to the Panamanians. The Panamanians, in turn, ignominiously ceded the canal to the Chinese company Hutchison Whampoa, which we know now is owned in part by Red Chinese military intelligence (i.e., via the Chinese Resources Enterprises).(4)

In a possible future confrontation between the U.S. and Red China (e.g., as it related to Taiwan), needless to say, the Cienfuegos facility as well as information from the Lourdes spy station could be coordinated and used against the United States. American ships would not be allowed to use the waterway, while the Red Chinese would have immediate passageway.

As much as we might want to ignore it, the fact remains totalitarian regimes persist in communist Cuba and Red China. War or the threat of war can occur not only because of economic and commercial reasons, but also because of political and military ones. We are still sworn to defend Taiwan, and if the Red Chinese were to attack the island, we are still bound to respond. The future, uncertain always, has been even more difficult to predict since the unexpected collapse in 1991 of the USSR and its communist, Eastern European satellites. Obviously we hope this confrontation with Red China or a re-emerging Russia never takes place.

Yet, America must be prepared, and the new Bush administration needs to take notice. In fact, the January 2001 issue of Vortex reports that Red China warned President George W. Bush before he even entered the White House that were the U.S. policy to tilt in favor of Taiwan, “China may move in a collision course with the new administration.” Moreover, if Russia were to move toward a dictatorship under Putin, as has been threatened in the last few months, it would perilously aggravate and escalate tensions, the likes of which have not been seen since the Cold War ended barely over a decade ago.

Finally, it is unfair for our government to increasingly carry on at home operations and measures that erode freedom and civil liberties — e.g., conducting asset forfeiture proceedings, increasing surveillance, and even illegal raids against American citizens — when a communist regime 90 miles from our shore continues to conduct hostile operations that threaten our national security and allow its facilities to be used, as our own law enforcement agencies in South Florida have documented, for the illegal drug trade, as a form of warfare against the United States.

Miguel A. Faria Jr., M.D., is author of “Vandals at the Gates of Medicine” (1995) and “Medical Warrior: Fighting Corporate Socialized Medicine” (1997). He is currently working on a book about Cuba. Web site: HaciendaPublishing.com.

This article may be cited as: Faria MA. President Bush and the Strategic Cuba Problem. NewsMax.com, January 23, 2001. Available from: https://haciendapublishing.com/president-bush-and-the-strategic-cuba-problem/.