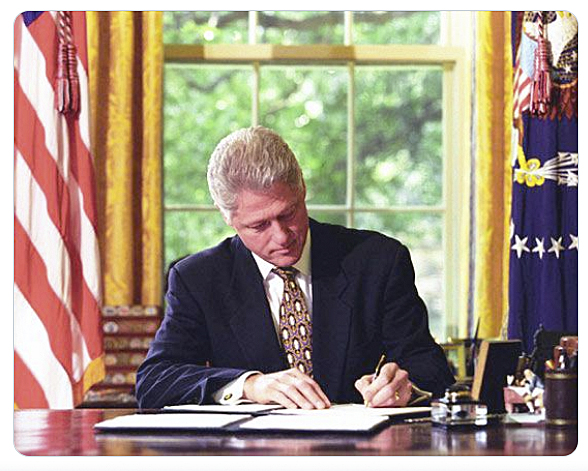 Immediately after taking the oath of office, President George W. Bush issued four executive memoranda. One of them established a 60-day freeze on the regulations hastily issued by President Bill Clinton before leaving office. The freeze on administrative rules and regulations needs to be extended and converted into a veritable machine of executive repeals not only of regulations but also of actual executive orders.

Normally, executive orders are published in the Federal Register, and, if Congress does not challenge them, they become administrative laws. Some 50,000 pages of such administrative decrees have been published annually in this Register during the Clinton years. Most of them were not challenged and became de facto federal mandates.

The Clinton administration not only increased the number of them, but also abused this prerogative intended to assist the Executive Branch of government in implementing the laws passed by Congress. Under President Clinton, more than any other president, the Executive arrogated to itself, in effect, congressional lawmaking powers.

By mid-December 2000, President Clinton had issued 347 executive orders, which have far-reaching consequences. Among these, journalist Cliff Kincaid noted, there were 80 classified Presidential Decision Directives (PDDs) mandating secret, unilateral executive actions that impact on the freedom of Americans.

President Clinton, in fact, added a new dimension to these secret PDDs, which are not published anywhere — not even Congress is privy to them. One of them, PDD-25, assigned U.S. troops to serve under foreign U.N. commanders; another one established that U.N. treaties supersede the laws of the United States. In yet another secret order, the details of which are not known because they have not been made public, U.N. personnel are protected from civil or criminal prosecution for violation of U.S. laws while operating on U.S. soil.

The Clinton administration supported the U.N. notion of an International Criminal Court (ICC), a tribunal that could potentially prosecute Americans for alleged war crimes and other crimes committed while serving as “peacekeepers” in U.N. missions in faraway lands. It is repugnant to many sensible Americans that at the same time that an administration has favored such a sovereignty-eroding policy, it passed executive orders exempting U.N. personnel, many of them Third World thugs, from U.S. laws and American justice.(1)

While President Clinton was impeached for perjury and abuse of power in the cases of Monica Lewinsky and Paula Jones, the more serious charge of abuse of power in the issuance of secret, unconstitutional PDDs intended to bypass congressional approval is yet to be elucidated for the American people. Former Clinton adviser Paul Begala, in a candid moment, summarized this process of lawmaking as “stroke of the pen, law of the land, kind of cool!”

What exactly is included in some lesser known, secret PDDs and executive orders? It’s still difficult to ascertain the content of some of these privileged executive orders because they remain secret.

Congress, for example, does not, to this date, have a copy of PDD-25, which Clinton signed in 1994. Yet this order was also used to authorize the U.N. to use American troops in U.N. operations. Moreover, on the basis of PDD-25, U.S. Army Specialist Michael New was court-martialed and discharged for refusing to wear a U.N. uniform on a U.N. mission.(2)

President Clinton used executive orders, PDDs, and “executive determinations” to decree what Congress refused to authorize via legislation. For example, PDDs were used to impose a new “sexual orientation” classification in the military, as well as to allow the Clinton administration to bomb and wage war on Yugoslavia (i.e., executive orders 13119, 13120, 12846, 12934, etc.) without having Congress declare war, as required by the Constitution. What all of these executive orders do is to usurp power by the Executive Branch of government at the expense of Congress, erode the liberties of the American people, and adversely tilt the balance of power imposed by the U.S. Constitution.

PDD-62, issued on the pretext of fighting terrorism, grants the FBI the power to maintain surveillance on Second Amendment groups and civic organizations opposed to the U.N., as well as “extremist” Christian fundamentalist groups.

PDD-63, supposedly signed to prevent unauthorized access to government computers, instead allows executive agencies to spy on the electronic communications of private citizens using the Internet.

Executive Order 13107, issued on December 4, 2000, sets aside 84 million acres in the Pacific Ocean, the largest protected area in the U.S. territories, preventing fishing (i.e., commercial and recreational) and the much-needed oil drilling that can be carried out in this largely desolate area.

Similar executive orders have designated national monuments in the Alaskan Wilderness Refuge and vast tracts of land in the West, including Wyoming, where private citizens have protested to no avail. With Executive Orders 13087 and 13132, President Clinton attempted to revoke our revered system of federalism and infringe on the 10th Amendment, which prevents the federal government from arrogating powers from the states granted to them by our Founding Fathers in the U.S. Constitution.

Our new president needs to bring to light the usurpation of power by the previous administration, and the offending PDDs and executive orders, frankly, should be immediately rescinded.

No president, Democrat or Republican, should wield such extra-constitutional power.

In particular, all of the inimical and impolitic U.N. orders that erode the sovereignty of these United States should be fully investigated, and all of those not in accord with our Constitution immediately abrogated. Call it a new campaign to correct the record and educate Americans on the constitutional limits of government, a Republican form of government exercised with the consent of the governed.

President George W. Bush needs to cancel all of the executive measures that were instituted specifically to circumvent the will of Congress. It was the U.S. Congress, after all, in which our Founding Fathers laid the legislative power of our constitutional government. It was, in fact, because Congress would not approve these measures injurious to the civil liberties of citizens that President Clinton, while smiling to the cameras of CNN and displaying his usual gregarious side to the American people, later manifested the other darker side of his nature and went ahead, nevertheless, and signed these deleterious measures.

President Bush, Vice President Dick Cheney, and Attorney General John Ashcroft, as soon as he is confirmed, have to move rapidly toward rescission of these harmful decrees. They have a lot of work ahead of them. Due diligence and exertion of this labor is necessary and fundamental in dismantling the tyrannical scaffold left behind by the previous administration, if we are to restore this nation to its former constitutional integrity.

Miguel A. Faria Jr., M.D. is Editor in Chief of the Medical Sentinel of the Association of American Physicians and Surgeons (AAPS), and author of “Vandals at the Gates of Medicine” (1995) and “Medical Warrior: Fighting Corporate Socialized Medicine” (1997). Web site: HaciendaPublishing.com.

This article may be cited as: Faria MA. Dismantling Clinton’s Scaffold of Executive Orders. NewsMax.com, January 29, 2001. Available from: https://haciendapublishing.com/dismantling-clintons-scaffold-of-executive-orders/.