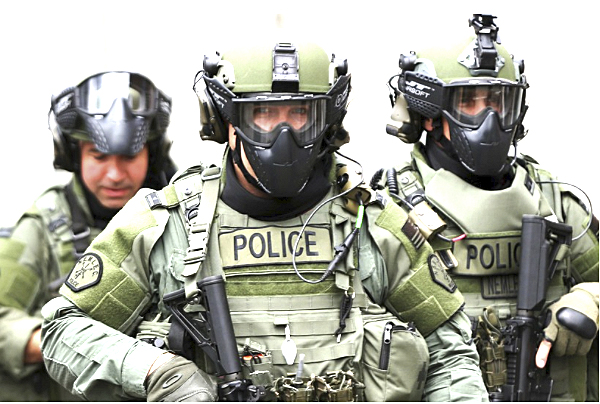 Police shootings and the militarization of law enforcement

Charleston, SC, is dear to my heart, where in more peaceful and nostalgic times I attended medical school. North Charleston is close enough, and the recent shooting incident in that locality in which a white police officer shot and killed a black man, fleeing the scene (he might have thought the arrest was related to being delinquent in his child support payments), is an atrocity related to the new law enforcement paradigm militating for the militarization of the police force. I cannot enter the human mind for definitely establishing a racial crime, but I’m certain of the militarization side of the equation.

And this incident is just as infamous as the racial motive claimed by black leaders, including Al Sharpton. It goes without saying that the shooting is an affront to all decent, freedom-loving citizens of all races because it was unjust as well as the fact the shooting trend is reminiscent of a police state that would threaten life, liberty and the pursuit of happiness.

And from the outset, it should be stated this trend is not the fault of the courageous men and women serving in the police force — but the fault of the authoritarian leaders at the very top of power in Washington, D.C. It is this leadership, usually in Democratic administrations, that have been clamoring for the militarization of the police for a long time, ignoring the relentless freedom-eroding progression that lead towards the dystopias of an Orwellian future.

You may say that given my previous commentaries on the Ferguson riots blaming black leaders that I’m looking at the other side of the equation. Indeed, I am. We need to staunch the increase in violence in our society, but we should find the true causes. This latest incident took place under the watchful eye of a video camera that does not lie and provides an illustrative example of what we can expect with further militarization of the police, the “we against the enemy” mentality of war, unrestricted urban warfare! For many years now, many of us have argued against the war on drugs, the ATF’s forceful “dynamic entries,” asset forfeitures, etc. — i.e., policies advancing the power of the State at the expense of the lives and freedom of American citizens.

The chickens of increasing authoritarianism have come home to roost. Listen to gun prohibitionist, millionaire political mogul, and former New York City Mayor Michael Bloomberg, in a speech at MIT in 2011, when he bragged: “I have my own army in the NYPD, which is the seventh biggest army in the world.”

Accelerated by the powers given to the State in the NDAA, many police forces throughout the country are being trained to act as soldiers at war, trained to kill enemy combatants — not to serve and protect their fellow citizens. So what can you expect then when the “enemy” refuses to surrender and runs? Look up the document, “US Army—Interment Resettlement Operations” of February 2010 — 326 pages of what the Army is to do with recalcitrant American citizens — i.e., interment and resettlement. These are veritably blueprints for an incipient police state!

This military document shows the imprints of inchoate tyranny rapidly accelerating with the institutionalization of the NDAA. Section 1031, allowing the military to perform law enforcement functions, capture, and indefinitely detain American citizens on U.S. soil — effectively repealing the Posse Comitatus Act of 1878, which protected liberty and was as American as apple pie. But no longer! Even earlier, as far back as the Clinton administration, the military was asking soldiers that if given the order, would they fire on American civilians? I don’t know the results. But who is the enemy? The American people or Islamic terrorists? When the infamy of the questionnaire was found out, the lapdog media gave the Clinton administration cover by attributing the exercise to a conspiratorial joke, just as the circling and elusive “black helicopters,” and then forgotten. It seems under the Obama administration militarization has accelerated behind closed doors.

Turning our police forces who are sworn “to protect and serve” into a standing army, a concept our Founding Fathers abhorred, is not only dangerous to liberty but also a travesty to victimized Americans, who are not the enemy, and to the courageous men and women who valiantly serve.

This article can be cited as: Faria MA. Police shootings and the militarization of law enforcement. GOPUSA.com, April 14, 2015. Available from: https://haciendapublishing.com/police-shootings-and-the-militarization-of-law-enforcement/

1 thought on “Police shootings and the militarization of law enforcement”