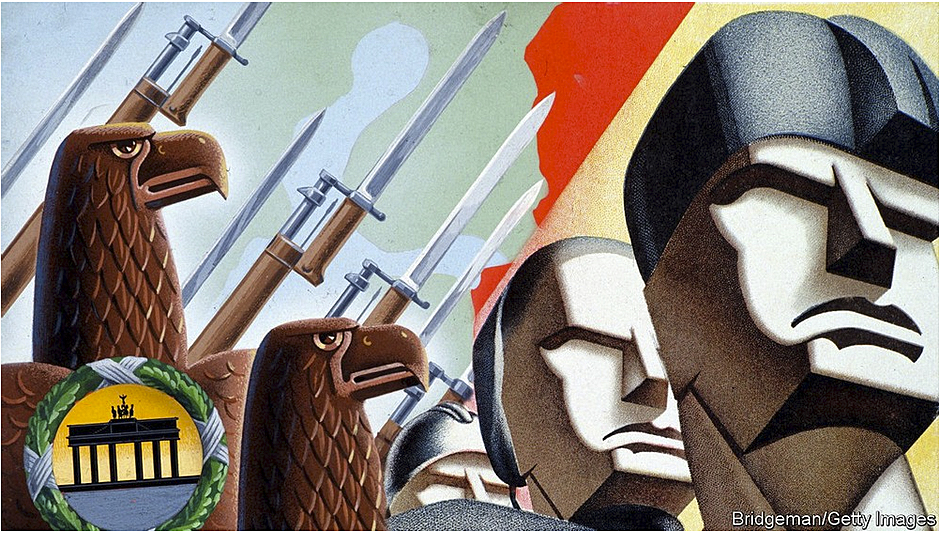 National Service ‘Compassion Fascism’ by Any Other Name

In his State of the Union Address, President George W. Bush proposed the formation of a USA Freedom Corps, calling for every American “to commit at least two years ­ 4,000 hours over the rest of your lifetime ­ to the service of your neighbors and your nation.”

This will require 80 hours per year for every adult American. On January 29, 2002, at another function, Bush further explained the concept and gave a pitch for the “volunteer” program that will require $560 million from taxpayers by 2003.

Doug Fiedor, who publishes an e-mail newsletter, “A Weekly View from the Foothills of Appalachia,” described what happened when he tried to connect with the “volunteer” organization:

“So, I went to the new Freedom Corps web site and tried to see how difficult it would be to sign up. A couple clicks down into it I found Citizen Corps and clicked on ‘join.’ That was when my security software warned me that the certificates didn’t match and I was actually entering a FEMA web site.”

Mr. Fiedor went on to describe his cybervoyage through the bureaucratic maze:

Because it is a bureaucracy, there is a USA Freedom Corps Blueprint (handbook) on the web site. “The USA Freedom Corps will have a Council and Office within the Executive Office of the President. The Council will be chaired by the President and include the heads of key departments and agencies with public service programs and components.” So much for creating a citizens’ “volunteer” group. It’s a full-blown bureaucracy. Another one! Even before the founding Executive Order was signed, the bureaucracy’s regulations were being written.(1)

It’s too bad President Bush chose to insert the word “freedom” in the name of this program. He is no Bill Clinton, and yet he might have learned, perhaps simply by presidential osmosis, to use Orwellian Newspeak (i.e., doublespeak, using a term that means completely the opposite of what is intended) to sell his program politically.

Bovard points out that there have been plans to expand the infamous National Service program AmeriCorps, established by Bill Clinton, from 50,000 to 250,000 members to assist in the “war against terrorism.” The proponent of this expansion is none other than Sen. John McCain, R-Ariz.

If you wonder what the AmeriCorps members have been doing all this time, here is a sampling:

“In Mississippi, AmeriCorps members have gone door-to-door to sign up people for food stamps; In New Jersey, they recruited middle-class families to accept subsidized federal health insurance for their children; In California, they staged a puppet show to warn 4-year-olds of the danger of earthquakes; Also in California, they were found foisting unreliable ‘ultra-low-flush toilets’ on poor people.”

It is no wonder that “almost half of AmeriCorps members quit before completing their term of service. And, the General Accounting Office has criticized AmeriCorps for failing to make any attempt to measure the program’s actual impact.”(2)

It is evident that National Service (NS) is bureaucratic boondoggle. But it is more perverse than that. When National Service (or Community Service, as we shall see) is directed by the State, it easily becomes perverted into compulsory service, regardless of the purported good intentions behind it.

And if it is compulsory, then it’s not freely exercised or given charitably, but required ­ in other words, obligatory. And if it is obligatory, then it cannot be a USA Freedom Corps but is instead an alien form of compulsory fascism. It is not American, or voluntary, or anything remotely associated with our legacy of freedom.

In its more euphemistic conception, Community Service (CS), or compassion fascism, is already sprouting in many communities, even in private schools. Most independent (private) schools where I live already require compulsory CS for graduation from high school. Depending on the school, students must complete anywhere from 75 to 300 hours of school-based Community Service.

How, you ask, can anyone complain about having young people serve in their communities, allowing them to give of themselves to those who are less fortunate and assist our fellow men in need? Certainly in the short term, it’s an excellent public relations requirement that could preemptively disarm critics of private education. But is it really good in the long term for students and our communities?

National Service and compulsory Community Service have their roots in authoritarianism and collectivism ­ e.g., the Total State of Benito Mussolini (compassion fascism), the Soviet Communism of Lenin and Stalin, Nazi Germany (Hitler Youth), the Little Red Book of Mao-Tse-Tung (the Red Guards), and in my native Cuba, the Young Pioneers of dictator Fidel Castro.(3)

Second, when NS and CS are obligatory, the work of citizens is not freely given. It is not charity. It is not even altruism. It is obligatory, and thus deprived of genuine good faith and voluntarism.

Third, a country that already has an abundance of freely giving volunteers (over 90 million citizens) for humanitarian and other projects and which donates billions of dollars a year to philanthropy does not need to force its citizens to “volunteer” in NS or its children mandated to undertake CS.

The average American already donates 81 hours of volunteer service and charitable work, in figures compiled for 2001 as cited in The New York Times.

As Thomas Sowell wrote in Human Events a year or so ago, the actual theme of CS is “compulsory submission,” where students are used as “pawns in a propaganda program, which is more in keeping with what happens in totalitarian societies.”

He is correct! In fact, that is why I do not oppose community service for juvenile transgressors as legal punishment or restitution. Is CS, then, philanthropy, rehabilitation or punishment?

Rather than engendering a sense of true philanthropy and charity, as is the case with volunteering for good works carried out disinterestedly by churches, synagogues, voluntary associations and other benevolent institutions of society, National Service and school-based (compulsory) Community Service teaches students to conform and to surrender personal liberty.

It’s not by chance that Karl Marx’s eighth plank of the Communist Manifesto promulgates “equal liability of all to labor,” and the 10th plank, the establishment of industrial armies and the combination of education with labor for industrial production.

From privately sponsored CS to state-sponsored, obligatory NS, there is just one small, dangerous step.

Certainly National Service was not what our Founding Fathers intended for a free people endowed by their Creator with the precious Natural rights to life, liberty and the pursuit of happiness.

I have nothing but praise for genuine voluntarism à la Mother Teresa when conducted freely and disinterestedly. Parents and family should be teaching their children respect and discipline, while churches should be teaching charity and philanthropy. NS or CS, school-based (whether public or private), is another story, for the aforementioned reasons.

It is interesting that when CS becomes NS, required and enforced by the State, it is the government that decides what qualifies as “service,” not the individual. Work that Christian groups want to perform frequently doesn’t qualify as “service.”(4)

This is another reason that libertarians and knowledgeable conservatives, as well as religious groups, oppose National Service (forced labor). Liberals and statists love NS and CS for the wrong reason ­ viz, establishing subservience and enforcing conformity of the State over individual members of society.(5)

One well-informed legislator is Majority Leader Dick Armey, R-Texas. He has seen this proposal for what it is and has rejected it. The legislation “will not pass if I can help it,” Armey told CNSNews.com. “America is great at giving from the heart, but I think it is a bad idea for government to mandate voluntarism.”(6)

President Bush should discard this authoritarian notion, this collectivist idea, and instead promote true, genuine charitable acts of individual philanthropy, based at the local level and not micro-managed by Washington.

As Thomas Jefferson said, “When all government, domestic and foreign, in little as in great things, shall be drawn to Washington as the centre of all power, it will render powerless the checks provided of one government on another, and will become as venal and oppressive as the government from which we separated.”

Miguel A. Faria Jr., M.D., is editor in chief of the Medical Sentinel of the Association of American Physicians and Surgeons and author of Cuba in Revolution:­ Escape From a Lost Paradise (2002).

This article may be cited as: Faria MA. National Service ‘Compassion Fascism’ by Any Other Name. NewsMax.com, February 22, 2002. Available from: https://haciendapublishing.com/national-service-compassion-fascism-by-any-other-name/.