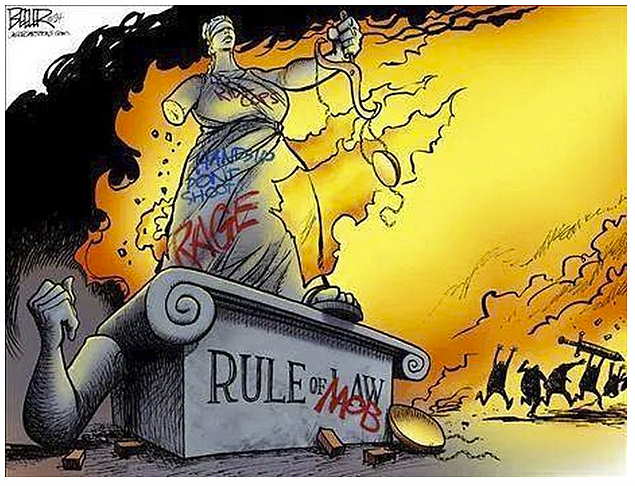 Looting and Burning — Trampling the Rule of Law!

Today we awakened to the dramatic headlines: “Ferguson Businesses Torched in Overnight Protests,” “Ferguson Explodes Following Grand Jury Decision Not to Indict,” “Ferguson Businesses Burned, Looted.” A caption to one of the graphic photos of the burning inferno read: “Protesters take their pictures in front of the burning Juanita’s Fashion R Boutique on West Florissant Avenue in St. Louis, Mo. early Tuesday, Nov. 25, 2014. Protesters set fire to buildings and cars and loot businesses in the area where Michael Brown was fatally shot after a grand jury declined to indict white police officer Darren Wilson in the death of the unarmed, black 18-year-old.” Dramatic events but what could we expect as a result of the mass media having fueled the fire of this conflagration with their non-stop coverage and unremitting and biased sensationalism since last August?

In a previous article, “Let’s not make any more excuses,” I blamed the emotionally charged rhetoric of irresponsible African-American leaders for consistently promoting racial tension for the sustenance of their own political power, not to mention safeguard their financial self-interest. While calling ostensibly for “reconciliation,” these civil right leaders keep fomenting divisiveness and racial strife. This is certainly true, but if the so-called civil right leaders have been promoting racial hatred and making excuses for riots and violence in the long term, we should also be blaming the mainstream media for this latest explosion of racial violence — the senseless burning and looting of businesses in Ferguson.

The mass media kept fueling the fire of divisiveness and hatred, posing as if they were correcting injustice, but in reality espousing their own political causes — and acting in their own financial self-interest. Consider the typical media headline leading to the latest incident in Ferguson: “Most police shootings don’t end with prosecutions.” Variations of this and other emotional motifs were repeated over and over until the grand jury rendered its decision. The conflagration, violence, and looting were a foregone conclusion. The black leaders, like Al Sharpton, would provide cover. He did. In Staten Island, Sharpton said, the failure to indict “was expected, but still an absolute blow to those of us that wanted to see a fair and open trial.” No condemnation of the violence. No apologies for businesses and property destroyed.

The mainstream media drummed the noise of protests and kept strife alive since last August because it was profitable. It sells newspapers and keeps audiences fixed on the electronic screens. In their own minds, they are leading a crusade against racial injustice, while the profits quietly keep rolling in. But American society loses: Businesses in Ferguson were destroyed; insurance premiums will go up to pay for the losses, and unsuspecting Americans will pay for the escalating premiums; the community remains polarized; America remains divided; the police will be reluctant to do their job, and who can blame them? They are damned if they do, and damned, if they don’t!

Most of all, young black males are the losers. They will remain alienated, and they will not strive to be the best they can be because they have been indoctrinated to believe they live in a racist and unjust society where they cannot succeed. Sure, America is not a perfect nation. There is still discrimination (in both directions); there are still injustices, even occasional police brutality. But no nation has made greater strides to solve her racial problems.

Riots can be understood from the perspective of minorities immorally discriminated by the legal injustice of public segregation, as in the America of the 1950s and 1960s. But the issue of burning and looting in Ferguson, Missouri, has not been about rights and justice. Today, we are beyond that, and what we have had for five decades is opportunity and affirmative action. If one surveys, academia, blacks have attained administrative as well as professorial positions, undreamed of two generations ago. And in this decade, America elected a two-term African-American President, proving there is justice, opportunity, and that black men can succeed in America.

Since the decision of the grand jury was not to indict, and we have had violent rioting as a result, we must conclude that the decision is an injustice. But was it? According to the AP:

“Prosecuting Attorney Bob McCulloch said the jury of nine whites and three blacks met on 25 separate days over three months, hearing more than 70 hours of testimony from about 60 witnesses, including three medical examiners and experts on blood, toxicology and firearms. ‘They are the only people that have heard and examined every witness and every piece of evidence,’ he said, adding that the jurors “poured their hearts and soul into this process.’ ”

The application of the lowest common denominator for all, except for those who are more equal than others, is false equality and socialism. Equality of outcome for the masses, once again excepting the ruling elite, is totalitarian communism. The threat of violent riots hanging over the heads of citizens and jurors deliberating on questions of justice is plain and simple anarchic blackmail, rule of the mob. It should not be tolerated in a nation that prides itself in the rule of law!

This article first appeared in GOPUSA on November 27, 2014. A shorter version of this article also appeared in the Macon Telegraph on December 7, 2014.

This article can be cited as:  Faria MA. Looting and Burning — Trampling the Rule of Law. HaciendaPublishing.com, November 27, 2014. Available from https://haciendapublishing.com/looting-and-burning–trampling-the-rule-of-law.