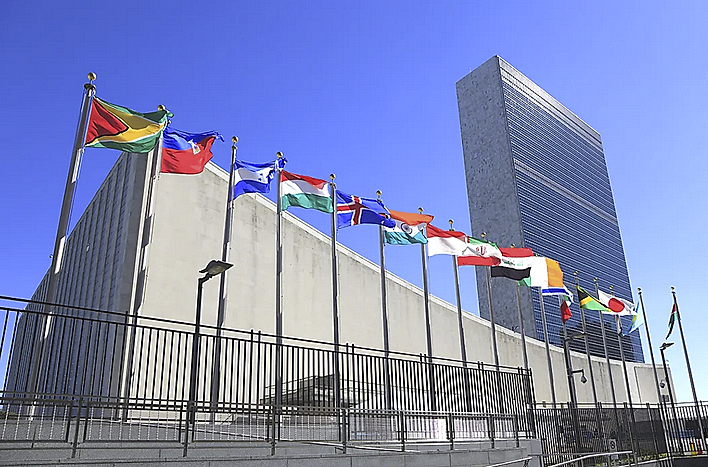 It’s United Nations Day in the US!

Investigative journalist and U.N. expert William F. Jasper published another exposé of the United Nations last year, a book that is yet to receive the attention it deserves: “The United Nations Exposed.” (1) Since Oct. 24 is “United Nations Day” in the U.S., it’s worthwhile to bring this informative and well-researched book to the attention of readers who may not be acquainted with the abominable record of the power-seeking, supranational organization.

In “The United Nations Exposed,” Jasper goes beyond his earlier book, “Global Tyranny: Step-by-Step,” (2) but there is enough continuity flowing mellifluously from one book to the other to be easily digested by Americans who seek to know more about the “United Nations Day” that has been placed on our calendars on a par with Presidents Day, Thanksgiving and Christmas.

Enumerated are the U.N. proposals that stealthily and dangerously erode the sovereignty of the United States and our ability to act decisively when our freedom and national security are threatened. Consider a few of the many ominous proposals:

1. The 1998 International Criminal Court (ICC) that went into effect this year and threatens the constitutional rights of U.S. servicemen and American citizens abroad. Although President George W. Bush managed to exempt the U.S. for one year from provisions of this ominous court, the threat remains; a better option would have been to get the U.S. out of the U.N. and the U.N. out of the U.S. right then and there. (3)

2. Global gun control to ban gun ownership, disarm Americans, proscribe the natural law of self- and family protection and nullify the Second Amendment of the U.S. Constitution. (4)

3. Global taxation. No one has to tell the reader that U.S. taxpayers would again bear the brunt of this wealth transfer and redistribution, socialist proposal.

4. Imposition of a variety of “treaties” that would bypass the constitutional provisions of the U.S. Constitution and end piecemeal the sovereignty of our Republic.

And yet the U.N. has failed to carry out the “peace-keeping” functions to which it is ostensibly devoted. As Jasper discloses: “Lt. Gen. Romeo Dallaire, the former commander of Canada’s U.N. ‘peace-keeping’ mission to Rwanda in 1994, revealed that he had sent a fax to [Khofi] Annan’s office warning that Rwandan security officials had been ordered to ‘register’ the [predominantly Christian] Tutsis as an obvious prelude to mass liquidation. Annan’s office ordered Dallaire to ‘assist in the recovery of all weapons distributed to or illegally acquired by civilians,’ which, in effect, meant disarming the intended victims!”

We all know the result of that infernal negligence: The Hutus carried out a genocidal massacre of the Tutsis minority in Rwanda with guns and machetes, leaving the rivers and landscape covered with the bloody bodies of their disarmed victims.

There was a precedent established long ago by the U.N.: the 1960-1962 infamous treatment of Katanga, when a peaceful, prosperous African state was bombed into submission by the U.N. and forced to capitulate into the arms of the savage, communist Congolese. (5)

In short, Jasper’s books cover much more than I can reveal in this article. They should be read by everyone on “United Nations Day” in the U.S. Then, perhaps more Americans will join the chorus of informed and vigilant citizens chanting, “Let’s get the U.S. out of the U.N. and the U.N. out of New York!”

Miguel A. Faria Jr., M.D., is Editor-in-Chief of the Medical Sentinel and author of “Vandals at the Gates of Medicine” (1995); “Medical Warrior: Fighting Corporate Socialized Medicine” (1997); and for the lesson of gun control in Cuba, see his latest book, “Cuba in Revolution: Escape From a Lost Paradise” (2002). All three books are available from HaciendaPublishing.com.

This article may be cited as: Faria MA. It’s United Nations Day in the US! NewsMax.com, October 24, 2002. Available from: https://haciendapublishing.com/its-united-nations-day-in-the-us/.