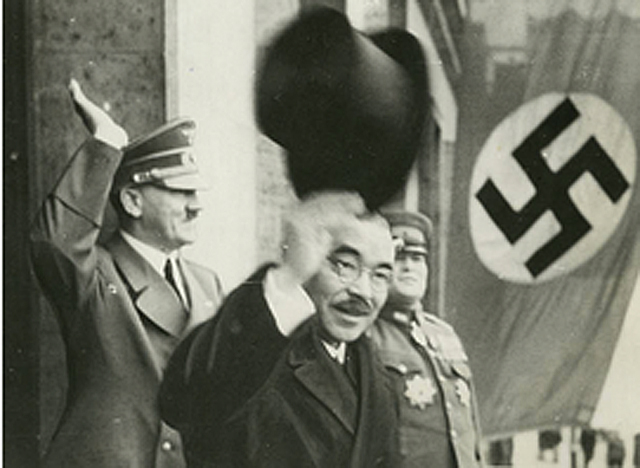 How Germany and Japan Could’ve Won by Miguel A. Faria, MD

Note: This article was written at the request of my friend, the late Samuel Chi, editor of RealClearHistory, and is reposted here for the enjoyment of our readers at HaciendaPublishing.com.

Fortunately for the United States, the Japanese strategic plan for World War II was flawed in that the Japanese High Command decided to take on a sleeping giant in order to gain control of the Pacific basin, rather than attack the USSR. There was no way for the Japanese to beat the U.S., even with their alliance and the support of Italy and Germany. On the other hand, if the German grand strategy had been followed and carried out by Germany AND Japan, we could, very possibly, have lost the war, and today be speaking German on the East coast and Japanese on the West coast!

A lot of historic material exists to support various theories about how the Germans and the Japanese could have won World War II. What follows here is my take on this subject, based not only on standard history books, but on information gathered from formerly classified intelligence from U.S., German, and Soviet files, much of it published in excellent books. This treasure trove includes the released German files from Enigma deciphered and other captured materials, the Venona transcripts, the selectively released KGB files, and best and perhaps most authoritative of all — The Mitrokhin Archives (i.e., almost the complete files from the archives of the KGB’s First Chief Directorate up to 1984).

As a result of the information contained in the Mitrokhin Archives, hundreds of Soviet spies and traitors have been uncovered, some even prosecuted for their treachery many years after it occurred. But even though we could read German and Japanese secret messages during World War II via SIGINT, and the German high command was infiltrated by Western (e.g., the Black Orchestra) and Soviet spies (including the Red Orchestra and the funkspiel radio broadcast), the Germans could still have won the war, but the Japanese got greedy and overconfident in their estimate that they could defeat the British and American forces in the Far East and did not cooperate with the German Grand Strategy.

The German Strategy was of course to crush the USSR by a two-front attack: The German Panzers were to roll into the USSR from the west, which actually took place on June 22, 1941, and the Japanese Imperial Army was to attack Siberia from the east, which never took place. As a result, we shall see what actually happened.

The Germans pleaded with the Japanese to invade Siberia in the east and catch the hated Russians between two fronts in crossfire between the two powerful, invading armies. Stalin, fearing the Japanese, had placed his best troops in the east just for that contingency. His best troops were then in Siberia, heavily armored and motorized divisions, well stocked, and with suitable winter clothes (e.g., white snow fur coats to blend in with the Siberian terrain, etc.) placed there awaiting the Japanese, who never came. The Japanese decided they wanted a different prize — namely, the Pacific region.

Just before the onset of World War II, the Japanese Army in Mongolia had been decisively defeated by those elite Siberian Soviet army units at Khalkan Gol and Lake Khasan in an almost secret encounter that involved a million soldiers. More than likely this defeat helped convince the Japanese to proceed with the Tanaka Plan or Southern strategy for the conquest of the Far East and the Pacific, rather than invade Siberia, where the Soviets had their best troops. After their defeat in Mongolia and other concerns, the Japanese Navy’s arguments for the Southern naval strategy had prevailed over the Army’s Northern Siberian military strategy.

Now we know there is more to the story thanks to two books: 1) Stalin’s Secret Agents: The Subversion of Roosevelt’s Government (2012) by M. Stanton Evans and Herbert Romerstein and 2) Operation Snow: How a Soviet Mole in FDR’s White House Triggered Pearl Harbor (2012) by John Koster. Soviet Agents of Influence in the FDR administration led by the spy Harry Dexter White, Assistant Secretary of the Treasury, acted at the behest of Moscow and Stalin, to push the Japanese into war against the United States to protect the USSR.

Harry Dexter White pushed the Japanese into a corner. In the summer of 1941, Japan deficient and desperately needing raw materials and oil, resources crucial to its survival, was deliberately blocked access to them by the FDR administration. By late 1941 further deprived of oil and vital resources, Japan was forced to go to war and manipulated to attack, not the Soviet Union but the U.S., protecting the USSR from invasion from the east and being attacked and crushed on two fronts.

And on October 9, the master spy Richard Sorge radioed Moscow and reassured the Soviets that there would not a Japanese invasion of Siberia. Japan had decided to proceed with the Tanaka Plan to attack the Pacific Rim and get her raw materials and oil from Southeast Asia. On December 7, 1941, “a day that will live in infamy,” the Japanese navy and air force attacked Pearl Harbor. In 1942 the Roberts Commission placed much of the blame for America’s lack of preparedness for Japan’s attack on Pearl Harbor, unfairly, on Rear Adm. Husband E. Kimmel and Lt. Gen. Walter C. Short, the Navy and Army commanders. We now know where the blame should have been laid.

Spies Working Against the Third Reich

Among the greatest spies who infiltrated the nerve center of Nazi military intelligence were civilians like Fritz Kolbe and high ranking German officers, including Von Gaevernitz and Hans Gisevius. But treason in the Third Reich led all the way to the top. Rear Admiral Wilhelm Canaris, head of the Abwehr, German military intelligence, was himself a double agent, our top man in Hitler’s circle! A fascinating book makes a good a case that one member of Hitler’s inner sanctum, Martin Bormann, was also a Soviet spy. The book is Hitler’s Traitor (2000) by Louis Kilzer.

Kilzer also wrote Churchill’s Deception: The Dark Secret that Destroyed Nazi Germany (1994). As I stated before, the Allies could already read the German ( i.e., Enigma traffic) and Japanese secret messages because we had broken both of their codes with our decoding machines at Bletchley Park. (Some years later, we would also temporarily break and decipher the Soviet code in the Venona transcripts via Ultra.)

Stalin, who did not trust anyone, put his faith in the German-Soviet Non-Aggression Pact of 1939 or the Molotov-Ribbentrop Pact, via which they carved out Poland between themselves. Deep inside his dark inner self, Stalin wanted (or was forced by circumstances) to trust Hitler, but Hitler despised the Russians and Stalin. And so while they were talking cooperation, Stalin was thinking time to build up his Red Army, and Hitler was thinking lebensraum and Operation Barbarossa.

For Hitler, Russia was nothing but lebensraum (i.e., living space) and the Russian Slavs were to do the work of the master race, the German people, the volk. So as soon as the Battle of Britain stalemated, he responded with his planned Operation Barbarossa, the invasion of Russia over a thousand mile front, with 3 million men and more than 3000 tanks.

The German’s Army Group Center was pointed like a dagger toward Moscow. Their Army Group North was aimed at the Baltic States and Leningrad. And, their Army Group South was to roll toward the South, the Crimea, and eventually capture Stalingrad and the Soviet oil fields near the Caspian Sea.

Soviet spies, such as those in the Red Orchestra (Rote Kapelle) and most remarkably, Richard Sorge, not only uncovered the exact date of Operation Barbarossa (June 22, 1941), but also tried to assure Stalin that the Japanese had no intention of attacking Russia, that their intentions were in the Pacific area. But Stalin refused to listen to them or even to listen to Winston Churchill, who also tried to warn him.

And so the Germans were initially extremely successful. They conquered large chunks of Soviet territory, including the Russian breadbasket region of the Ukraine and the most populated regions in western European Russia.

The Germans did need oil and refineries to conduct the war, especially after they were not able to knock Russia out on their first blow before the winter of 1941-42 set in. In fact, one of Stalin’s reasons to “trust” Hitler in 1939-40 was the fact that he knew that Germany needed oil, and much of her oil came through the Trans-Siberia railroad that ran across the vast territory of the USSR, bringing oil and other raw material and supplies from the Pacific port of Vladivostok and Siberia to European Russia and Germany.

Miguel A. Faria, M.D., is Associate Editor in Chief in neuropsychiatry; history of medicine; and socioeconomics, politics, and world affairs of Surgical Neurology International (SNI). He is the author of Vandals at the Gates of Medicine (1995); Medical Warrior: Fighting Corporate Socialized Medicine (1997); and Cuba in Revolution: Escape From a Lost Paradise (2002). His recently released book is America, Guns, and Freedom: A Journey Into Politics and the Public Health & Gun Control Movements (2019).

This article may be cited as: Faria MA. How Germany and Japan Could’ve Won. RealClearHistory.com, February 18, 2020. Available from: https://haciendapublishing.com/how-germany-and-japan-couldve-won-by-miguel-a-faria-md/