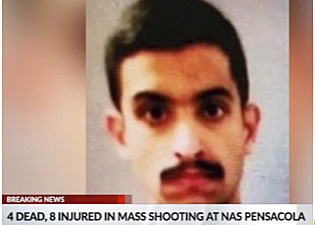 The Pensacola, Florida, Naval Air Base shooting that took place on December 6, 2019 has now been found to be an act of terrorism by the Department of Justice. Three American servicemen were killed in the attack. A background check that should have been made before the Saudi airman was admitted in the United States, not to mention to the air base, showed that he had been indoctrinated by radical Islamic fundamentalism and jihadist ideology.

Now twenty-one Saudis have been expelled from the air base training program and will be returned to Saudi Arabia. Why are we not profiling immigrants as we should, especially those from Islamic countries, to determine who can enter our nation and who can join our military before tragedy strikes?

It was also reported that there were “roughly 852 Saudi nationals training with the U.S. military under a cooperative agreement.” I wonder how many foreign cadets there are from Pakistan, Egypt, Sudan, and other Islamic nations listed in the 2017 travel ban such as Somalia, Libya, Iraq, and Iran? We should be scrutinizing them as well. Are there more potential jihadists among those trainees still in our midst, potential tinder boxes ready to be lit?

This latest terrorist attack has not been the only one on our soil. We have had at least three major attacks triggered by Islamic jihad in the last five years worth mentioning. The San Bernardino terrorist attack that took place on December 2, 2015 resulted in a massacre in which 14 people were killed and 22 others were injured. This rampage was motivated by “home grown” Islamic radicalism.

The Orlando nightclub shooting took place on June 12, 2016, when Omar Mateen, a 29-year-old security guard, opened fire and killed 49 people and wounded 58 others inside Pulse, a gay nightclub in Orlando, Florida. This shooting incident was similarly motivated by Islamic terrorism and the jihad being waged against America and the West. This shooting, the deadliest terrorist attack on U.S. soil since September 11, 2001, was initially blamed on guns by both the media and the Obama administration. Then it was blamed on the preponderance of hate crimes against LGBT people — ignoring the fact Mateen had ties to ISIS as revealed by the 911 call he made in the midst of the rampage. Yet, the shooting was politicized for the promotion of two political agendas, namely gun control and hate crimes, rather than blaming it on the obvious — Islamic terrorism.

A third incident took place in New York City underscoring not only the increasing terroristic threat to American cities but also the use of cars and trucks to plow into unsuspecting crowds with mass casualties of innocent people. The Halloween truck attack (photo, left) on October 31, 2017 in Manhattan a few blocks from the site of the Twin Towers emphasizes the switch from mass shootings caused by deranged citizens to deliberate jihad by foreign and domestic Islamic terrorists.

Our faulty immigration laws and virtually open borders facilitate Islamic terrorism in this country. Again, the question that begs to be answered is why were these men, potential terrorists, not properly vetted and their ideology detected before they were allowed into this country? How long are we going to continue the insane policy of allowing foreign nationals, who are known or should be known to embrace radical Islam, to enter this country and be capable of conducting acts of terrorism on our soil?

Miguel A. Faria, M.D., is Associate Editor in Chief in socioeconomics, politics, medicine, and world affairs of Surgical Neurology International (SNI). This article is excerpted and edited from his recently release book, America, Guns, and Freedom: A Journey Into Politics and the Public Health & Gun Control Movements (2019).

This article may be cited as: Faria MA. Detecting jihadists could prevent terrorist mass shootings. HaciendaPublishing.com, January 20, 2020. Available from: https://haciendapublishing.com/detecting-jihadists-could-prevent-terrorist-mass-shootings-by-miguel-a-faria-md/