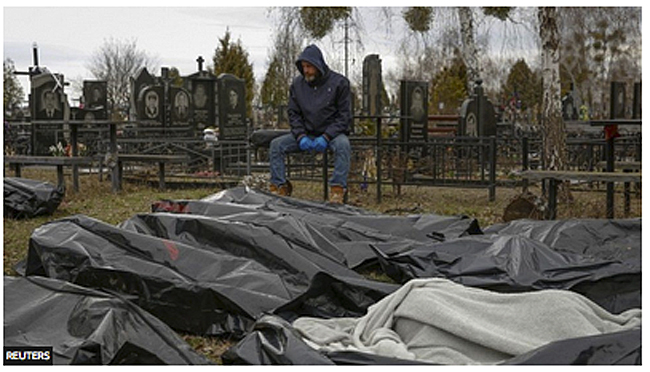 Genocide and the Next Red Line by Cliff Kincaid

How does it feel to watch the discovery of mass graves in Europe? This is something new for millions of Americans. But this is how world wars begin.

Once and for all, this Russian war on Ukraine, which began on February 24, demonstrates the complete ineffective nature of the United Nations, whose Security Council is powerless in the face of Russian membership and a Russian veto. It’s finally time to defund the U N.

Meanwhile, the West’s “sweeping sanctions” on Russia, an effort to force it to withdraw its forces, have failed. Even without Kyiv, Russia has already captured significant new parts of Ukraine.

But instead of paying attention to Europe, some Americans drawn to an isolationist attitude prefer to watch hundreds of thousands of desperate people coming through our southern border and then wonder why Joe Biden’s administration doesn’t want to do something about that. Perhaps we ought to grasp the connection between what’s happening in Europe and south of the border.

The United States is encouraging Ukrainians to continue fighting, but they are not being given enough weapons to win. Major parts of their country are in ruins and dead bodies litter the streets. The massacre of civilians in the Ukrainian city of Bucha is the latest example.

To make matters worse, some so-called “conservatives” are siding with Putin and his “special military operation” against an alleged Nazi regime in Kyiv.

Any American who assisted the Russians in word or deed will have to answer for these crimes. And that includes Hillary Clinton, whose Russian re-set occurred when she was Secretary of State under Obama/Biden. Putin followed that with his first invasion of Ukraine in 2014. He was advertising the future, which we captured in our book, Back from the Dead: The Return of the Evil Empire.

Ukraine President Zelensky calls it “genocide,” a sensational charge but based in fact and attributed to Putin’s so-called brain, the Russian philosopher Alexander Dugin.

The late anti-communist Brazilian writer and philosopher, Olavo de Carvalho, who debated Dugin, once commented that Dugin was the brains behind Putin’s geopolitical strategy and that he “advocated the systematic killing of Ukrainians — a people who, according to him, do not belong to the human species.” This is the textbook definition of genocide.

We know what Putin’s strategy is, and we understand the propaganda and disinformation that attempts to portray the people of Ukraine as non-humans, even Nazis. This is propaganda once associated with Soviet Russia whose pact with Hitler started World War II. It turned out the Soviets were like the Nazis in many ways.

The Ukrainians are being treated like those brave Cuban freedom fighters who tried to overthrow the Castro regime after Castro had seized power under false pretenses, claiming he was a non-communist reformer. Castro was a communist all along and was assisted in his power grab by Herbert Matthews of The New York Times, who whitewashed his communism, and the “fourth floor” of the U.S. State Department, as Ambassador Earl E. T. Smith once described the traitors in one part of the U.S. Government who brought communism to the Western hemisphere.

At the last minute, U.S. air power was pulled back, leading to a slaughter of some anti-communist Cubans and imprisonment for others.

Ukraine is Biden’s Bay of Pigs. It is slow-motion acquiescence to the genocide of Ukraine.

Ukraine’s version of Herbert Mathews was Walter Duranty, who covered-up one Ukrainian genocide undertaken by the Russian that is now in the process of being repeated. Today, Tucker Carlson is playing the role of Duranty.

Ukrainians are fleeing the country, with some destined to be the new “boat people,” a term applied to the South Vietnamese who escaped from the Vietnamese communists backed at the time by the military might of the Red Chinese and Soviet Russia. They had to flee because the communists had achieved their goal — the complete takeover of the country as the Americans abandoned the capital, Saigon, in the wake of a complete cut-off of weapons and supplies to the anti-communist resistance.

It was a scene repeated under Biden in Afghanistan, as Americans fled in a badly staged pull out, leaving behind Afghans and Americans. It was a lesson for Putin. He can win if he just hangs on long enough.

Is there anybody who believes the Ukrainians will end up any differently? Accept it as a given that more refugees will be coming, this time from Eastern Europe, and this fact alone makes what Biden is doing on the southern border relevant to the ongoing genocide in Europe.

We hear constant talk about how Ukraine will win, but Zelensky keeps pleading for weapons and wondering out loud, during a Fox News interview, whether Biden is playing “games” with his country’s future. It’s as if Biden wants Ukraine to continue fighting but not hard enough to win enough battles to actually defeat the Russians. Zelensky understands the “mind” of the U.S. President. It is a mind-set that we have seen in the past, at the end of the wars in Vietnam and Afghanistan. In Biden’s case, the mind is a terrible thing to waste, and wasted it is.

Our leaders, including top generals, don’t even want to win.

General Tod D. Wolters, head of U.S. European Command, opposes giving Ukraine the planes its needs, saying, “…the intelligence community assesses the transfer of MiG-29s to Ukraine may be mistaken as escalatory and could result in Russian escalation with NATO…producing a high-risk scenario.”

Translation: the Deep State is on Russia’s side.

We are witnessing brave resistance to this genocide but Biden gives Ukraine just enough support to continue but not enough to really make a difference.

At some point, another wave of refugees will enter the United States, this time from Europe. Another red line will be drawn somewhere else, perhaps in Asia against Red China, and another no-win war will commence. These are the consequences of a no-win strategy against America’s enemies.

The only real solution is protecting borders here and abroad and eliminating corrupt regimes, criminal organizations, and foreign ideologies such as communism and revolutionary Islam that thrive on the basis of conflict and chaos. Of course, it goes without saying that a lunatic Washington regime based in Cultural Marxism that favors boys in girls’ sports will have to be taken down as well.