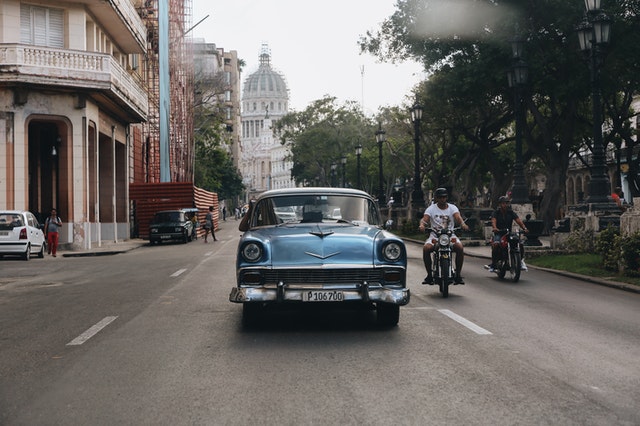 Thank you for your repeated entreaties to accompany you on your “AIMS Brings You Cuba!” adventure. You should know that as a pragmatic decision to obtain hard cash, American physicians are welcomed in communist (fascist) Cuba, but Fidel Castro does not allow freedom-loving Cuban-Americans to participate in those indoctrinating cultural/medical exchanges. Nevertheless, I would like to give you some suggestions for your upcoming trip to Cuba.

While you are in the Caribbean prison, which is what Cuba has become, you and some of your fellow participants should independently rent a taxi (probably driven by an M.D. or professor who is forced to do so for pressing economic reasons, despite his exalted education) to see for yourselves the real, dire situation in Cuba, rather than wearing the rose-colored glasses provided to naive tourists and fellow travelers of the communist dictatorship.

Before you go on your exchange trip to communist Cuba, you should surf the Internet and read some of the articles that have been published and posted in the Miami Herald, The Washington Times, and particularly in LaNuevaCuba.com and NewsMax.com, to find reliable articles about the dark realities about Cuba today.

While you are in Cuba, make it a point to visit black Cuban physician Dr. Oscar Elias Biscet, who was incarcerated at the dreadful Cuba Si prison in Holguin. He was jailed there in 1999, sentenced to a three-year term for “disrespecting patriotic symbols” ­ that is, hanging a Cuban flag upside down during a news conference.

Amnesty International considered Dr. Biscet a prisoner of conscience because he has called for the free exercise of human rights in Cuba. Dr. Biscet also has demanded freedom for all political prisoners in the Cuban gulags. He was tortured. He was denied medical attention. He was kept in solitary confinement. His wife and human rights groups were frequently denied visits.

Dr. Biscet’s wife, Elsa Morejón, in a rare visit, found he had lost 20 pounds and several teeth due to an untreated gum infection and malnutrition. Rather than succumbing to torture and unspeakable deprivation, Dr. Biscet remained firm and steadfast in his demand for the release of all political prisoners. A courageous and honorable physician, he is prepared to die for his beliefs.

Upon his release Oct. 31, he condemned the communist regime once again. Incidentally, if you want to study how to treat and manage pain, he would be an excellent individual to examine and study ­ a genuine profile in courage.

Do you have, as part of your cultural exchange, any plans to visit or interview Dr. Biscet in his home in Lawton? Since he was been denied medical care by the much-touted Cuban health care system, will any of you as a compassionate, fellow physician examine him and take a medical history? You, as virtual guests of the Maximum Leader, have an opportunity to lend succor and assistance to fellow human beings. Will you do so? There are hundreds of others, whose names I can provide if you wish.

If you get there in time, you may be able to render aid to Juan Carlos Gonzalez Leiva, a blind lawyer who has been beaten, tortured and held prisoner in Castro’s Cuba since March 4, 2002. The communist (fascist) authorities even took away his Braille Bible. He remains incarcerated at the State Security Operations Unit at Holguin. You could interview his courageous wife, Maritza Calderin Columbie, who has been trying to get the word about her husband out to the world.

Will you also reach in time Leonardo Miguel Bruzon Avila, who is in critical condition due to a hunger strike that began Aug. 27, 2002, at the Quivican prison to protest his arbitrary arrest and imprisonment? Near death, he ended his hunger strike because of the supplications of his inconsolable mother.

The name of his civil rights organization is the 24th of February, in remembrance of the 1996 shooting down of the two humanitarian Brothers to the Rescue planes in international waters by Cuban communist authorities under the orders of Fidel Castro himself.

Again, obtain and read promptly the articles in NewsMax.com by Agustin Blazquez and myself about these prisoners of conscience. While you are in the island also look up the intrepid journalist Maria del Carmen Carro, who has been imprisoned for trying to get the truth out about the hell Cuba has become, particularly for dissidents.

Incidentally, you should be careful whom you talk to while in Cuba; State Security has heavily infiltrated dissident groups! You also cannot miss the jineteras, who are forced to sell their bodies for a meal for themselves and their families. Also, because of poor sanitary and hygienic conditions in the countryside, be careful with the sporadic cases of dengue fever (mosquitoes), leptospirosis (rats), or infectious diarrhea.

On your return trip, your delegation should also visit the victims of Castro communism who were fortunate enough to have escaped the hellish worker’s paradise of Fidel Castro. You should visit Cuban exiles in Miami, such as Luis Zuñiga, who spent years in prison because of his political beliefs.

You should interview the poetess Maria Elena Cruz Varela, who was locked up with criminally insane women and given psychotropic drugs for her yearnings for freedom. And don’t forget the courageous Maritza Lugo Fernandez, who is doing in U.S. freedom everything within her power to liberate her brethren in communist enslavement.

I don’t want to bother you further with the harsh realities about Cuba.* Yet, already for your trip this February 2003, please begin to prepare yourself and do your homework, look up the truth before you are blinded by glittering disinformation which will be shined at you by your guests in one of the last two bastions of totalitarian, unreformed Stalinism in the world.

As José Marti, the Cuban apostle of independence, as stated, “To look passively at a crime is to commit it.”

* My new book, entitled “Cuba in Revolution:­ Escape from a Lost Paradise,” that was released just this year (http:s//HaciendaPublishing.com), will hopefully help inform you and your colleagues about the dark realities of Cuban totalitarianism. Perhaps you will even read it before you go on your Caribbean adventure and check some of the hundreds of references contained therein!

This article may be cited as: Faria MA. Further Suggestions for Those Visiting Communist (Fascist) Cuba. NewsMax.com, November 25, 2002. Available from: https://haciendapublishing.com/further-suggestions-for-those-visiting-communist-fascist-cuba/.