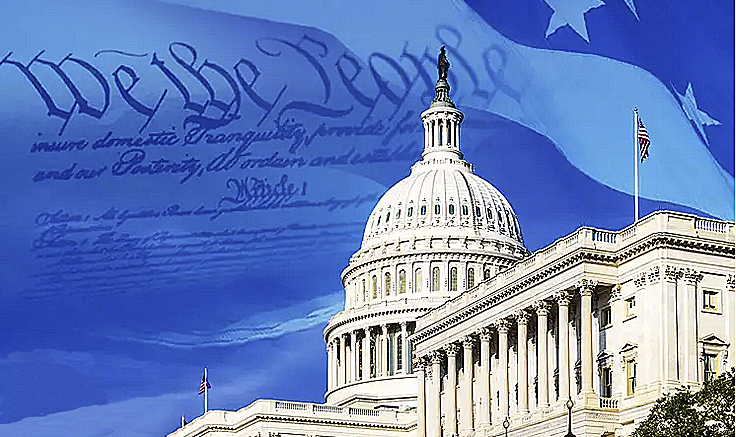 Somehow but not unsurprisingly the mainstream liberal media has kept under wraps the fantastic Christmas present passed by the House of Representatives on December 6, 2017 for the benefit of citizens who value freedom and their ability to protect themselves and their families outside the homes. We refer to the passage of a major piece of legislation supported by the NRA, the Concealed Carry Weapons (CCW) Reciprocity Act of 2017, which was approved with bipartisan support by a 231 to 198 vote (six Democrats crossed over and voted with the GOP, while 14 Republicans joined with the rest of the Democrats to oppose it). The bill was sponsored by Republican Congressman Richard Hudson of North Carolina.

The usual fearmongers, notably Rep. Nancy Pelosi (D-CA), accused the House of “passing a stunningly dangerous bill that opens the floodgates to guns” and more gun violence.  In response to Pelosi’s assertion, Rep. Hudson pointed out the nonsense of her remark and explained that recent studies in Florida and Texas had shown that CCW permit holders are not only lawful citizens but even have lower crime rates than former law enforcement officers.*

Other less passionate but more disingenuous gun control activists assert that the federal CCW law would override the laws of the states. This newly discovered affinity of liberals (or progressives masquerading as conservatives) in attempting to protect state rights seems to encapsulate duplicity mixed with hypocrisy in the extreme: They have always applauded the federal government treading under foot state laws not in accord with Washington and have never given a hoot about state rights.

Nevertheless, the fact is that CCW reciprocity would not affect local laws and would not eliminate state prerogatives. The recognition of the gun license throughout the states deriving from the CCW reciprocity law would work like a marriage or a driver’s license, in that it would be recognized by all states.

The CCW reciprocity legislation now goes to the U.S. Senate, where its fate is less certain. It will be interesting to watch how several Democrat senators vote on this bill. Democrat senators from deep blue (progressive) states, such as California, New York, Maryland, Hawaii, New Jersey, Massachusetts, Delaware and Rhode Island, may have nothing to worry about because as liberals in those states, they will be expected to vote against the bill.

That may not be the case for Democrat senators from other more conservative or libertarian leaning states, where the citizens already have “Shall Issue” CCW licensing or “Constitutional Carry” (no restrictions) laws in place. The senators from those states will frankly find themselves between a rock and a hard place, voting under two sets of watchful eyes. One group will be those of vigilant citizens in their respective states; the other will be the two enforcers of Democrat Party line discipline, the rabidly anti-gun senators from New York— Chuck Schumer and Kirsten Gillibrand.

Those senators will have to decide to cast their vote based on either political party loyalty or in accordance with their constituents’ wishes, as reflected by the enacted laws in their own states. Those voting against concealed carry know they will be preventing citizens from their own states from being able to legally exercise their right to carry concealed weapons (CCW) when traveling through or visiting other states.

Democrat senators serving either “Shall Issue” or “Constitutional Carry” states, states that went for President Trump in the 2016 presidential election then are, so to speak, also caught in the horns of a dilemma. There are eight U.S. Senators from “Shall Issue” states: Tammy Baldwin of Wisconsin, Bill Nelson of Florida, Jon Tester of Montana, Heidi Heitkamp of North Dakota, Sherrod Brown of Ohio, Joe Donnelly of Indiana; and then there are those from “Constitutional Carry” states, where no license is required at all for concealed or, in some instances, open carry: Joe Manchin of West Virginia, and Claire McCaskill of Missouri. Additionally, Senator Angus King, an Independent senator from Maine who votes with the Democrats, is caught in an uncomfortable predicament since Maine is a “Constitutional Carry” state. That makes nine vulnerable Democrat or Independent senators caught in the bull’s horn. Normally, Bernie Sander (I-VT) would be in the same predicament as Senator King. However, we must assume that as “the most popular senator on Capitol Hill,” Sanders will be allowed by the Vermont citizens to vote as he pleases, despite “Constitutional Carry” in the state.

And there are other political considerations. Democrat Senator Bob Casey Jr. of Pennsylvania comes from a state that voted for Trump, and although Casey is a Democrat, he is considered a pro-Second Amendment senator. So he will likely vote for CCW reciprocity. Then there is Maria Cantrell (D-WA), although she comes from a blue state (where both senators are Democrats and voted for Hillary), Washington State is “Shall Issue” state, which could expose her to some risk if she votes against reciprocity. Cantrell may be safe, but I’m not so sure about Casey, who may catch hell not from the voters but from the Democrat leadership. He has been at odds with his Party on the issue of abortions as well as gun rights. Although he may be at risk of inciting wrath from his own rigid party, he is a courageous individual, who will vote his conscience.

We should also consider the recent history of this bill. In 2013, Senator John Cornyn (R-TX) obtained support for a similar CCW reciprocity bill from 13 Democrats, including seven who are still in the U.S. Senate. According to Fox News, five of the seven, who have been previously mentioned — e.g., Joe Donnelly in Indiana, Martin Heinrich in New Mexico, Heidi Heitkamp in North Dakota, Joe Manchin in West Virginia and Jon Tester in Montana — are seeking reelection next year. All of those states are conservative leaning except for New Mexico.

Democrats who don’t toe the party line and vote for the bill without Senator Schumer’s approval, will face a wrath worse than that of a woman scorned, especially if the bill passes. And yet some of them will have to vote for reciprocity, if they are not to face the indignation of the voters in 2018 or even in 2020. Gun rights citizens have long memories.

Fox News, the only major network that reported thoroughly on this issue, opined, “it’s likely Democratic leader Chuck Schumer (D-NY) would seek to hold back the necessary support for the bill, giving his blessing only for a handful of vulnerable lawmakers to support it.” What this means is that Republicans will need a two-thirds majority or 60 votes for cloture — that is to end the expected filibustering of Schumer and company. If Senator Schumer can get 41 solid votes out of 49 on his side of the aisle, he can then let a few of the Democrats off the hook and still kill the bill. The stakes are high! Republicans will need to get the vote of most, if not all, of the vulnerable Democrats. Regardless of whether or not they have the necessary votes, they need to bring this bill to the senate floor and let the votes go on record.

The truth is that despite the demagoguery and fearmongering, concealed carry laws empower citizens and have been shown to reduce crime. CCW reciprocity is an idea whose time has come given the slight increase in violent crime in the last two reported periods (2014-2016) — representing a reversal of the previous two and half decades — not to mention the looming threat of terrorism. The Senate vote for this momentous piece of legislation will definitely be worth watching!

*“Combining the data for Florida and Texas data, we find that permit holders are convicted of misdemeanors and felonies at less than a sixth the rate for police officers,” Lott writes. “Among police, firearms violations occur at a rate of 16.5 per 100,000 officers. Among permit holders in Florida and Texas, the rate is only 2.4 per 100,000.10 That is just 1/7th of the rate for police officers. But there’s no need to focus on Texas and Florida — the data are similar in other states.” —John R. Lott Jr. “Concealed Carry Permit Holders Across the United States: 2016,” Crime Prevention Research Center, July 26, 2016.

Miguel A. Faria, M.D., Associate Editor in Chief in socioeconomics, politics, medicine, and world affairs of Surgical Neurology International (SNI). He was appointed and served at the behest of President George W. Bush as member of the Injury Research Grant Review Committee of the Centers for Disease Control and Prevention (CDC), 2002-2005. His website is www.haciendapub.com.

This article may be cited as: Faria MA. Concealed carry reciprocity coming soon to the U.S. Senate? HaciendaPublishing.com, January 10, 2018. Available from: https://haciendapublishing.com/concealed-carry-reciprocity-coming-soon-to-the-u-s-senate-by-miguel-a-faria-md/.